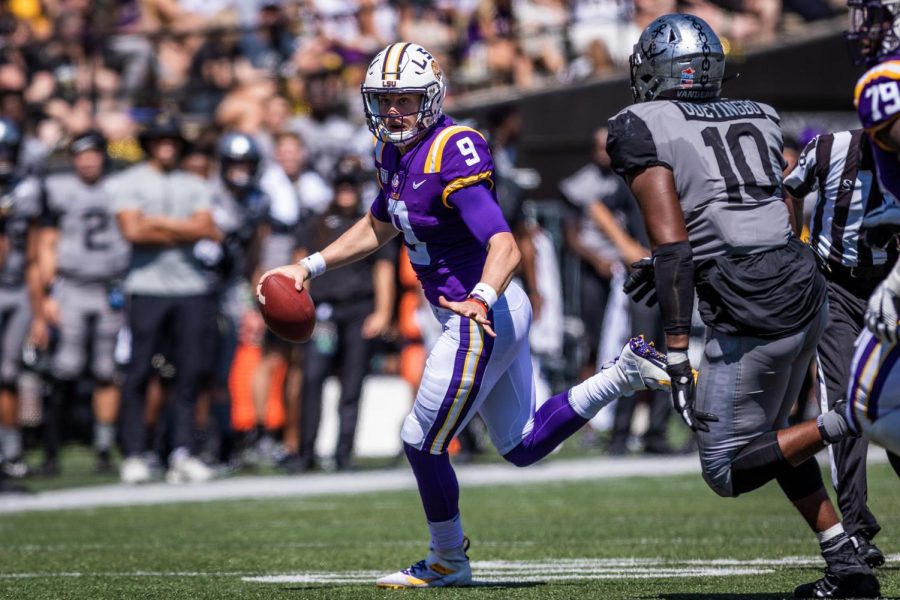 The Alabama Crimson Tide have reigned supreme for quite some time — they’ve won four of the past five SEC Titles, two of the last four National Championships (appearing in all four Championship Games) and in that span, they’ve dominated the Vanderbilt Hustler SEC Power Rankings.

This week, however, Alabama has been dethroned — at least, for now.

As the Vanderbilt Commodores prepare to take on the South Carolina Gamecocks on the road, we present our Week Ten SEC Power Rankings:

1. LSU Tigers: According to the AP Top-25, LSU has been the most impressive college football team this season — and we agree. The Tigers have traditionally relied on a dominant defense, but this year, it’s been their high-powered offense that’s stolen the show. Quarterback Joe Burrow is garnering serious Heisman buzz, Head Coach Ed Orgeron is as passionate and aggressive as ever and this newfound powerhouse has snuck its way past Alabama for the top spot in the conference. LSU will spend its Week Ten bye preparing for the biggest test of the year, as they’ll travel to Tuscaloosa to play Alabama next week.

2. Alabama Crimson Tide: It’s been quite some time since Alabama has been anything but first in our SEC power rankings. In truth, the Crimson Tide haven’t done anything wrong. The swap is more indicative of LSU’s impressive season, rather than a knock on Alabama. Nick Saban’s well-oiled football machine continues to chug along. They face a handful of challenges over the rest of the season, however, none more hyped up than their home clash with LSU next weekend. The winner of that game likely represents the SEC West in the conference championship and will surely be the top-ranked team in the country. Fittingly, they also have a bye to prepare for the Tigers.

3. Florida Gators: Florida has defeated nearly everyone in their path this season, with their only loss being against LSU. The Gators are back in the national spotlight under the leadership of Head Coach Dan Mullen, an impressive feat considering he’s only in his second year at the helm. Even more impressive is that their newfound prominence has come primarily with a backup quarterback in Kyle Trask, who stepped in seamlessly for the injured Feleipe Franks earlier this season. With a matchup against eighth-ranked Georgia on Saturday, this weekend will likely determine the winner of the SEC East. A win could put the Gators on the fast track to the conference championship.

4. Georgia Bulldogs: On paper, Georgia’s resume is fairly similar to Florida’s. Their one loss, however, makes all the difference: unlike Florida’s understandable loss to LSU, the Bulldogs’ loss came at the hands of the unranked South Carolina Gamecocks. Georgia’s former quarterback, Justin Fields, has started to gain traction in the Heisman Trophy race after transferring to Ohio State, which has only added to the pressure on their current signal-caller, Jake Fromm. The Bulldogs have a talented supporting cast, leading to their hopes that Fromm will spearhead a run to the National Championship, but their journey begins this week. They will travel to Jacksonville to play Florida in a must-win game that can either crush or bolster their chances of making the College Football Playoff.

5. Auburn Tigers: Auburn has top-tier talent. Unfortunately, they’re stuck in the undesirable position of competing in the nation’s best football conference. The Tigers have two losses and likely have no chance of reaching the conference title game or the playoff. They’ve certainly had some impressive moments, but after coming up short to Florida and LSU, they find themselves on the outside looking in.

6. Texas A&M Aggies: The Aggies hold a winning record and much like Auburn, their losses come to some of the top teams in college football. Regardless, those three losses to Auburn, Alabama and Clemson forces them outside the top 25– a common, yet disappointing position for head coach Jimbo Fisher’s program. With an easier game against Texas-San Antonio on the schedule this weekend, the Aggies should be building up to a late season push for a 9-3 record. Quarterback Kellen Mond’s play has been the bright spot for the Aggies.

7. Kentucky Wildcats: Coming off a dominant win over the then 5-2 Missouri Tigers, the Wildcats should be far more confident heading into this weekend’s showdown with Tennessee. With Lynn Bowden Jr., formerly a wide receiver, under center last week, the Wildcats’ offense was surprisingly impressive and ran the ball at will. If they perform similarly against the Volunteers this Saturday, they will be well on their way to what once seemed to be an unlikely bowl berth.

8. Missouri Tigers: Missouri may not be the most talented Tigers in the SEC, but they’re still sitting pretty at 5-3, despite back-to-back losses to Vanderbilt and Kentucky. The Tigers’ offense has stalled in the past two weeks, only accumulating 21 points over the two losses. What was once a promising campaign has been marred by losses to Wyoming and conference opponents with losing records. They won’t get any relief soon: after their Week Ten bye, they’ll play Georgia and Florida in succession. To make matters worse, the Tigers will be ineligible for a bowl game as they serve their NCAA ban for academic violations.

9. Tennessee Volunteers: The tables have turned for the Tennessee Volunteers. The Vols have racked up two conference wins since their abysmal start, highlighted by losses to Georgia State and BYU. The Volunteers should have no problem against UAB at home, an easier out-of-conference game that will send them into a three game SEC stretch to close out the year. If they can win three of their next four, Tennessee’s season will conclude with them reaching a bowl game for the first time under head coach Jeremy Pruitt’s tutelage.

10. South Carolina Gamecocks: Things are not looking pretty for the Gamecocks. With two Top-25 games and a road trip to Texas A&M left on the schedule, their odds of reaching a bowl game appear slim. Vanderbilt offers the easiest matchup left on tap, but they need three more victories. South Carolina and Ryan Hilinski, their backup quarterback turned-starter, are likely looking at a long offseason.

11. Ole Miss Rebels: Sitting at 3-5, the Rebels find themselves in a difficult, but not impossible position to contend for a bowl. In order to go bowling, they’ll have to win their easier games against New Mexico State and Mississippi State along with an upset over either Auburn or LSU. Ole Miss has consistently shown potential this season, but it’s rarely translated to wins, and their recent loss to Texas A&M was a backbreaking one. If they can put together a complete, fulfilling performance, this is a team capable of shocking a top contender.

12. Mississippi State Bulldogs: Another 3-5 squad, the Bulldogs are in better position to contend for a bowl than the teams ranked above them, despite being lower on the totem pole. With only one ‘unwinnable’ game on their schedule in Alabama, Mississippi State could actually find themselves in a situation where a win over Ole Miss in Rivalry Week sends them to a bowl. However, there hasn’t been much evidence of a turnaround in their recent performances, as the offense and defense never seem to be able to play well in the same game. They’ll need a handful of great combined efforts to reach the postseason this year.

13. Vanderbilt Commodores: Coming off a bye week and upset of then-ranked Missouri, the Commodores have more momentum now than at any other point this season. If they can carry that over, they stand a chance of landing a bowl appearance. However, with a Florida matchup looming in two weekends, near perfection is the only thing that can get Derek Mason’s program to a second consecutive bowl game.

14. Arkansas Razorbacks: There’s very little to look forward to for Razorback fans. Despite two wins over out-of-conference opponents, they’ve shown no real ability to contend with any of their conference peers. With a virtually nonexistent defense, there is a good chance that Arkansas does not get a single conference victory this season. The conference cellar is occupied by one team, and it doesn’t appear that will change in the near future.