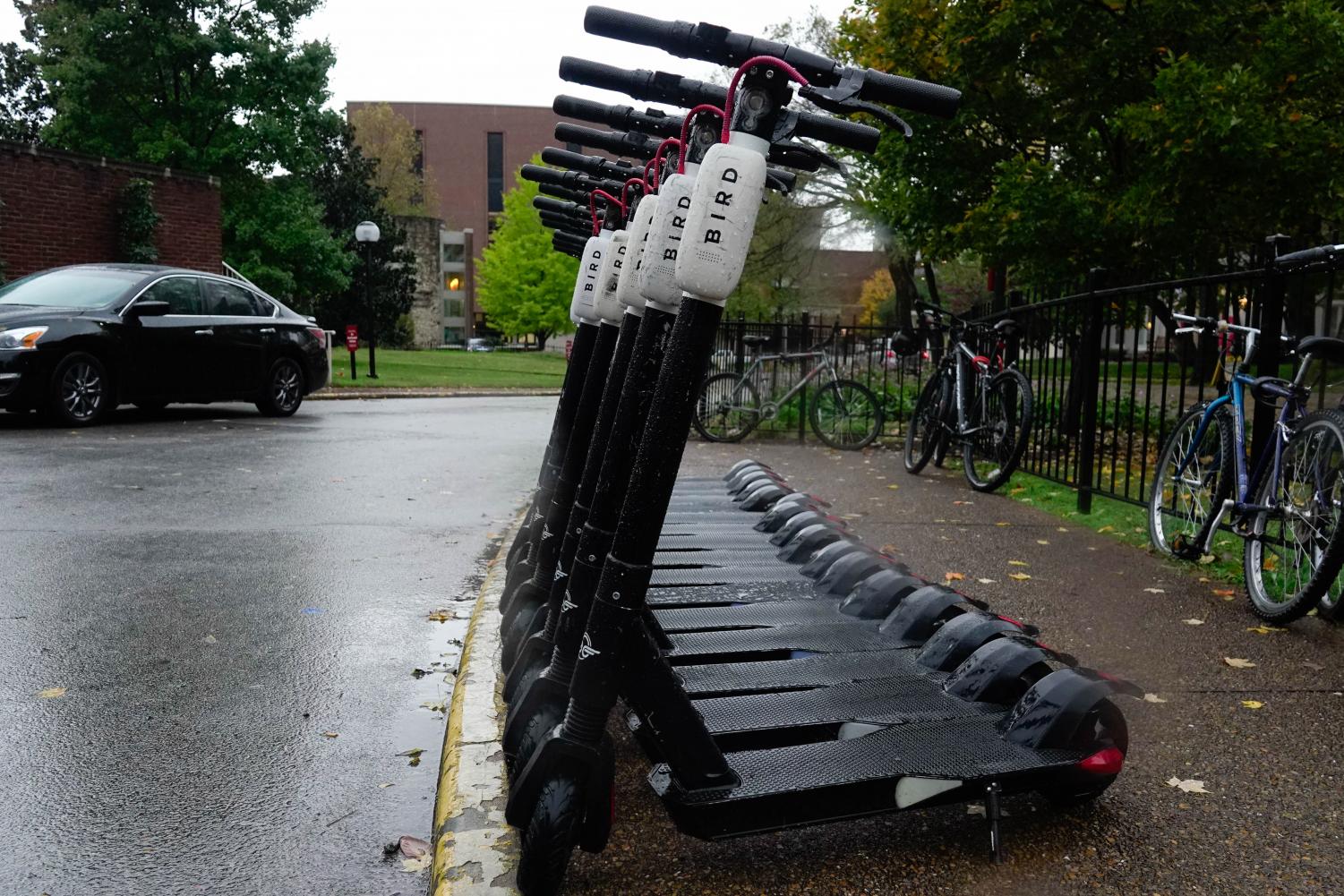 Bird scooters stationed outside of Branscomb (Photo by Mattigan Kelly).

Bird scooters stationed outside of Branscomb (Photo by Mattigan Kelly).

The E-scooter experiment: which ride is best?

The Hustler compiled a definitive ranking of all the electric scooters on campus.

We all know the feeling: muscles burning, heart pounding, sweat beading on your face as you sprint out the door, desperate to make it on time to your class that starts in two minutes. On foot, you would never make it. But with a scooter, you’ll be there quick enough to run to Munchie for your morning coffee.

These days, the huge scooter demand at Vanderbilt has been met with an overwhelming number of different scooter brands littered around campus. The question stands: how do you decide which scooter app to download? Well, look no further. Here is a definitive ranking of all of the scooters available on campus, so that when you’re in a rush, you know exactly which one to ride.

Birds bring a fast and smooth morning commute. They can accelerate up to 17 mph, but it comes with setbacks. They can only be parked in specific areas and come to a stop while riding through the Medical Center. If you’re one of the many HOD majors that’s always in a rush to get to Commons from Branscomb or Highland, you know how absolutely irritating that is. You might as well just walk. Even worse, they continue to hike up the prices, and seemingly changing  their model from the traditional $1-to-unlock to $5 for a set amount of time This is more geared towards Nashville tourists than students, since most of us are only hopping on Birds for a max of 5 minutes at a time to get somewhere quickly and conveniently.

Limes are the fastest of all the major scooters, accelerating to just above 22 mph, and they can be ridden through the Medical Center. They are also the easiest to maneuver; you can make hairline turns on crowded sidewalks and narrowly (but safely) pass by cars on the roads. Limes have also stayed loyal to their customers, keeping their prices the same since day one. They’re fast and reliable, but lose a star for being so rare on campus these days.

Uber Scooters or Jumps accelerate up to 17 mph, but feel the slowest out of all of the scooters. They are a smooth ride, but difficult to maneuver. I won’t lie, I crashed into at least two people and a vehicle during my short test ride of the Jump because it was slow to turn and not as sharp as Bird and Lime. It does earn extra points for being free to unlock, but don’t forget that it’s per-minute cost is double Lime’s.

Lime is the ultimate scooter experience. They are the most cost-effective scooter, and they have been from the start. They provide an agile and fast ride,  meaning that you can whip through the Medical Center, squeezing in between the crowds of people who didn’t think to unlock their own. Uber Scooters are a close second because of their cost effectiveness, but they just don’t ride the same. I’m not sure what Bird’s game-plan is, but if they don’t fix their pricing pretty soon to compete with Lime and Uber Scooter, they won’t make it– it’s a shame that they are the most common scooter around campus.