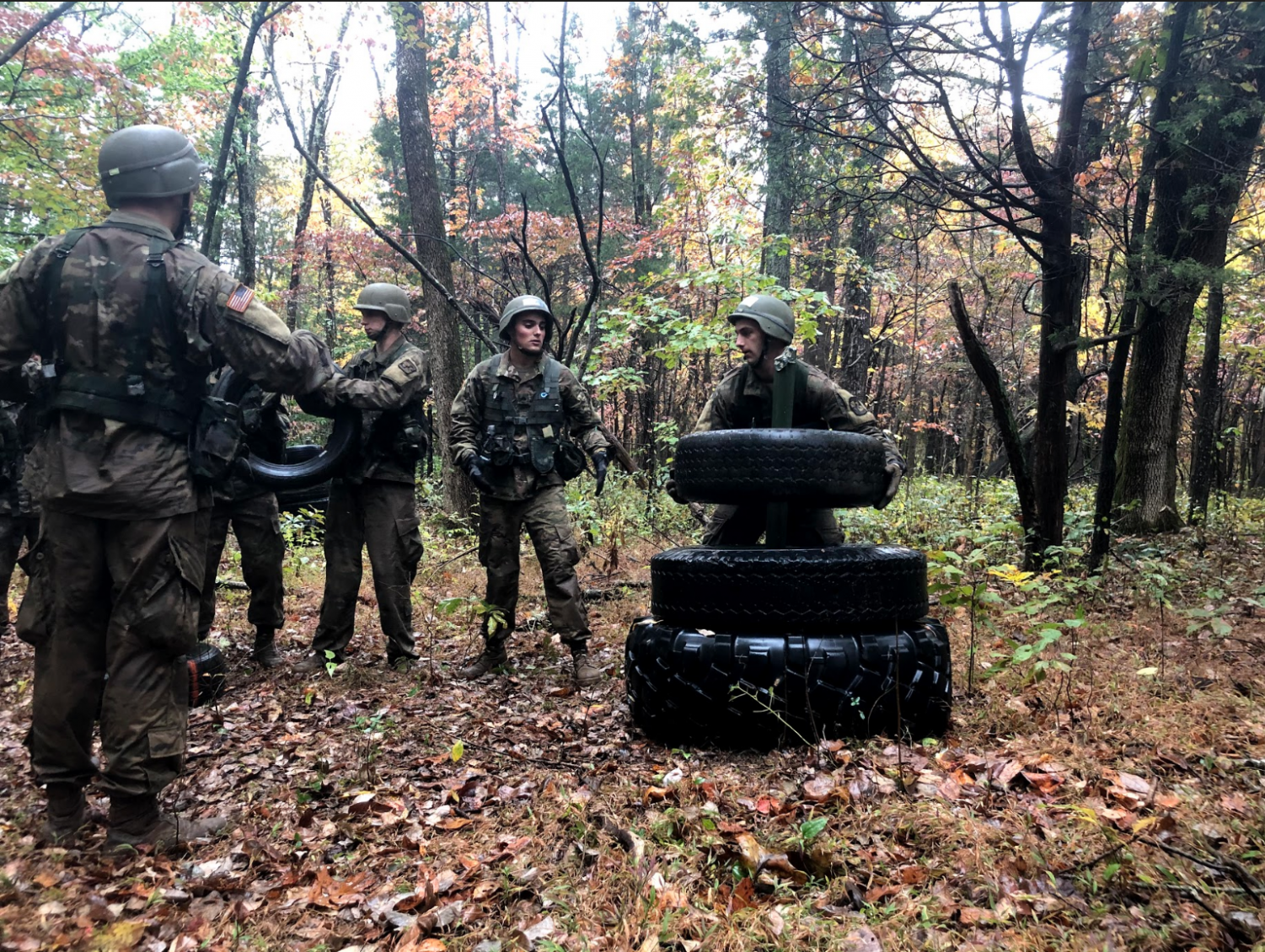 Cadets competing in the “Tower of Tires” challenge, a timed puzzle with strict rules in which numbered tires of varying sizes and weights must be transferred from pillar to pillar (Photo by Thomas Hum) (Thomas Hum)

Cadets competing in the “Tower of Tires” challenge, a timed puzzle with strict rules in which numbered tires of varying sizes and weights must be transferred from pillar to pillar (Photo by Thomas Hum)

Over Fall Break, Vanderbilt’s Army ROTC program sent its Ranger Challenge team to Fort Knox, Kentucky, to compete against 37 other 7th Brigade ROTC programs in the prestigious annual competition. Brigades are collections of battalions based on geographic area, the 7th Brigade is based in Fort Knox and includes ROTC programs from universities in Michigan, Indiana, Ohio, Kentucky and Tennessee. The “Go Gold” battalion is spearheaded by Vanderbilt and consists of cadets from six other schools including Belmont, Lipscomb, TSU, Fisk, Welch College and Trevecca Nazarene University. The Ranger Challenge team consists of a roster of 12 athletes selected from the battalion.

Ranger Challenge took place over the course of two days, Oct. 25 and 26. Teams earned points by participating in individual “missions,” or challenges, each of which held a different scoring system and point value. Many mission stations were open simultaneously, so Ranger Challenge teams had to budget their time and energy to reach and complete as many stations as possible in an effective manner. The highest-scoring teams would go on to compete at the US Military Academy at West Point. 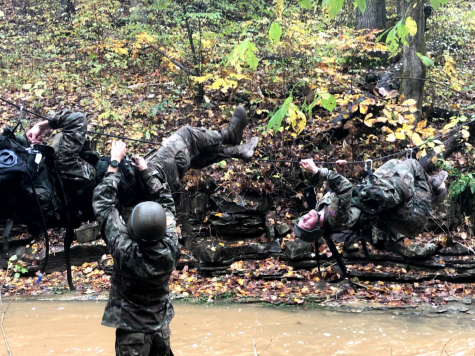 The cold, rainy weather created harsh conditions for the cadets to traverse during and between missions.

“With the rain and the cadets having to get wet, it definitely increases the mental toughness involved in the competition,” Mitchell said. “But, Army is an all-weather sport.”

Friday’s events included a written test, Dismounted Orienteering, Mounted Orienteering, Long Recon and the Endless Run. The Endless Run tested cadets’ physical endurance running around a track. Runners could be swapped mid-race, with teams scored on overall distance run over a fixed period of time. The Orienteering and Long Recon missions challenged cadets’ navigational skills, while a written exam covered information that cadets were taught as a part of Army ROTC. According to Mitchell, the team ran approximately 30 miles collectively in the Endless Run on Friday.

Saturday requires the teams to participate in a multitude of missions after only getting around four hours of sleep in the barracks. Still exhausted from the evening before, challenges for the day included several “long missions” in the morning, including resupply, route recon, bridge recon, split operations and attack point and “short missions” in the afternoon including Sheep-n-Shepherd, One Rope Bridge, Tower of Tires and Transport a Casualty. The day ended with a four-hour land navigation course in the evening. 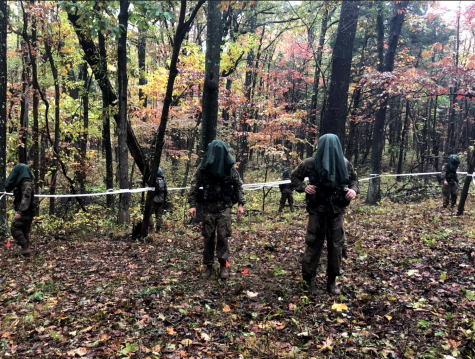 Thomas Hum
The team participating in the “Sheep-n-Shepherd” mission, a timed challenge in which one “shepherd” must guide blind cadets to an exit out of an enclosed course (Photo by Thomas Hum)

Cadet Nicholas Fauchet, a junior at Vanderbilt, shed light on the obstacles the Vanderbilt team faced throughout the training process.

“Some teams can get access to training resources that we can’t as a smaller battalion,” Fauchet said. “We’re also a smaller team. At the same time, you know for sure that everyone on the team is highly motivated.”

In addition to being smaller in numbers, the team is also younger than previous years, consisting of three upperclassmen and three first-year students. 1st Lieutenant Aaron Bailey, a coach for the Ranger Challenge team, commented on the implications of this younger roster.

“We actually only have one senior on the team this year and one junior who has done this before,” Bailey said. “The advantage we have is that we have kids who are motivated and able to build towards the future. They’re also not as prone to injury.”

The team went on to place 18th out of 38. Although they did not place in the top three, Vanderbilt’s Ranger Challenge team plans on returning to Fort Knox next year to compete again.

“I was really proud of what our team accomplished this year,” Cadet Ben Powdermaker, a Vanderbilt first-year, said. “I think we did well for how much we knew and how much we trained going into it. I am really excited to have the chance to hopefully compete again next year because we will be a much more experienced group.”