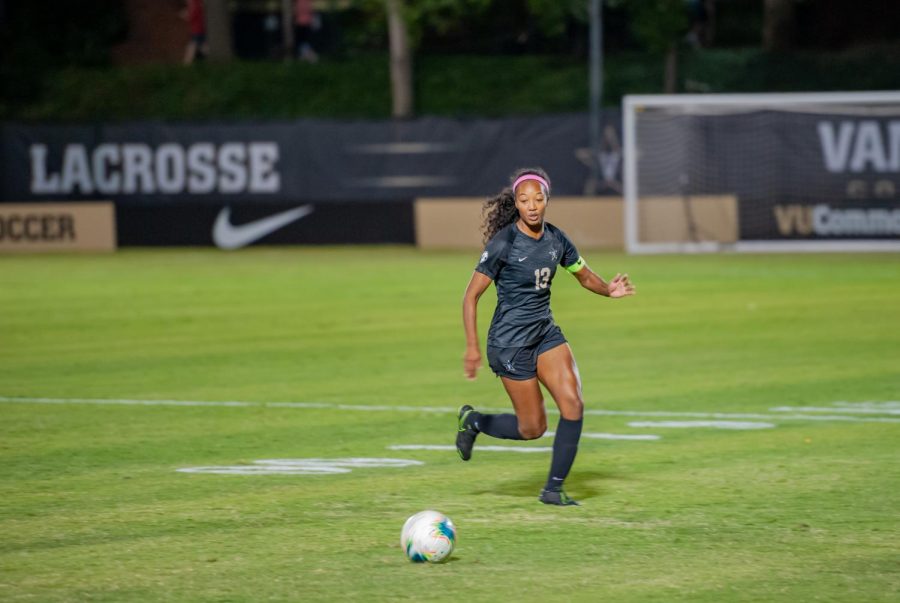 Vanderbilt suffered a 2-1 overtime loss to Texas A&M in their final home game of the season on Thursday night, Oct. 24. Prior to the match, the Commodores had won all but one of their nine games at the ‘Plex, with the lone loss coming against the now No. 20 Florida Gators.

The Commodores and the No. 22 Aggies came into the game with identical 4-2-1 conference records and tied for fourth place in the SEC with thirteen points a piece. By all accounts, these were two evenly matched teams going into a game that would have big implications on the final standings.

The game reflected the parity of the teams as neither had any clear chances in the first 15 minutes, both feeling their way into the game. The Commodores ventured forward more often but were not able to fashion clear goal scoring opportunities.

Vanderbilt’s best opportunities before the goal came with 22 minutes left in the half through two balls played across goal. For the first, Haley Hopkins worked with the ball on the right side and her cross was nearly met by midfielder Raegan Kelly but instead put out for a corner. Afterwards, forward Maddie Elwell drilled a ball across goal from a free kick that almost found midfielder Olivia Simmons stretching towards goal.

The goal for the Commodores came with just seven minutes left in the first half. Elwell played a pass down the left side for Simmons, who crossed a ball in for Hopkins to redirect into goal. That was Hopkins’ 11th goal of the season, second-most in the SEC.

Hopkins could have added another just a minute later as she found herself through on goal and rounding the goalkeeper, but her shot from a tight angle came off the right post.

The Aggies’ best chance of the half came through a header put wide by forward Ally Watt off a cross as Vanderbilt went into halftime with a one goal lead.

Texas A&M ramped up the pressure in the second half as they pushed for an equalizer. Just two minutes in, forward Rheagen Smith was played through clear on goal but defender Nia Dorsey recovered well to deal with the danger. A couple minutes later, a cross found forward Taylor Ziemer unmarked in the box and her shot towards the top left of goal was saved by Vanderbilt goalkeeper Taiana Tolleson.

The Aggies had another chance on the half hour mark as a free kick from 27 yards out by midfielder Jimena Lopez forced another save by Tolleson.

The Commodores mustered some attacking moves, most notably shooting wide of goal through Elwell and midfielder Leila Azari.

“We created enough chances to win the game,” Vanderbilt head coach Darren Ambrose said. “I kept saying to myself on the sideline, we’ve gotta put one of these away.”

The breakthrough for Texas A&M came with 17 minutes left as Vanderbilt defender Ella Shamburger brought down Watt in the penalty box. Watt took the spot kick herself, sending Tolleson the wrong way and scoring the equalizer the Aggies had pushed for.

The Commodores came under pressure from Texas A&M in the last 15 minutes with the Aggies pushing for a winner that didn’t come. The score was tied at one goal a piece at the end of regulation.

The first overtime period did not yield any goals for either team, though Vanderbilt had a decent scoring opportunity. Hopkins ran down the left side and cut the ball back to Azari, who tapped it back to senior midfielder Grace Jackson. Her shot from outside the box sailed over the bar.

The second overtime period ticked down with the game seemingly heading for a draw. But with just 45 seconds left in the period, Watt received the ball in the box and held her defender off. She turned and fired a shot past Tolleson for her second goal of the game and the winner.

“I think it shows why, at the moment, we’re not a top three team,” Ambrose said. “And that is in key moments where we have to fight a little harder– we just weren’t tough enough.”

The loss drops Vanderbilt to sixth place in the SEC standings with road games against Kentucky and Alabama before the SEC tournament in Orange Beach, Florida.