The Commodore offense has lacked a spark plug in recent weeks, but it seems as though Derek Mason has found his secret weapon: third-string quarterback Mo Hasan. 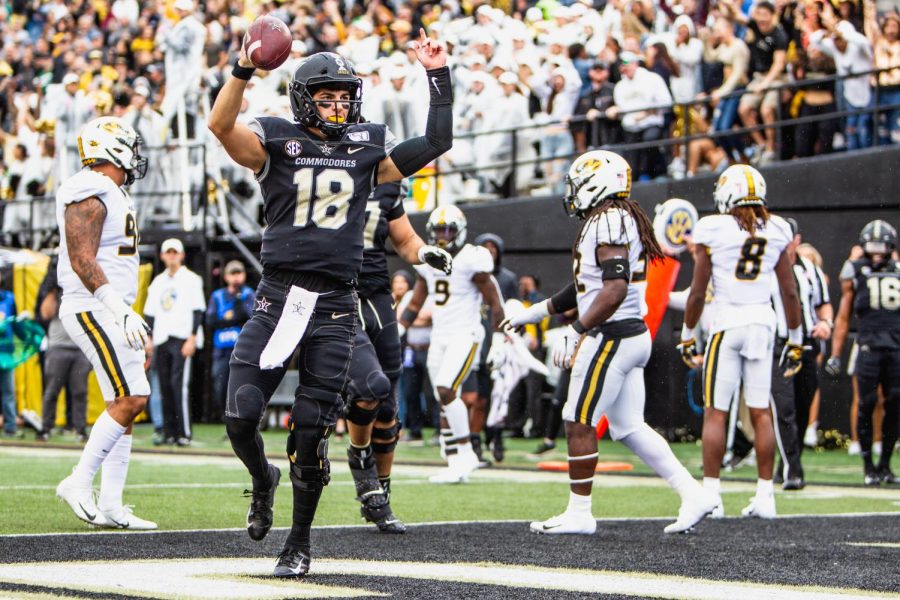 After an embarrassing, 34-10 Week Six loss to UNLV, the Vanderbilt Commodores appeared defeated — both physically and mentally. Many predicted their struggles to continue in Week Seven’s game against the 22nd ranked Missouri Tigers, who were favored by 21 points on the road against the Commodores.

Head Coach Derek Mason, however, had one last trick up his sleeve to ignite his team: starting Mo Hasan at quarterback.

“Mo really provided that spark this week for this week,” Mason said. “And the end result was a Commodore win.”

Hasan, a redshirt junior, had previous experience in a Vanderbilt uniform. Last year, with Deuce Wallace suspended, Hasan backed up Kyle Shurmur and was almost exclusively used for run packages. He finished last season with four completions for 38 yards in addition to seven carries for 52 yards.

However, this season, Hasan had not seen any action at quarterback. He has been listed as the third-string quarterback each week on the depth chart, as Riley Neal and Wallace have traded off snaps. But with Neal and Wallace struggling mightily to lead the Commodore offense, Mason decided on Sunday that it was time to make a major change under center.

According to Mason, he felt a shift in the team’s mentality starting Tuesday when they started practice or the week.

“[Hasan] brought a different type of energy,” Mason said. “You just saw him competing, dropping dimes, and just getting after dudes and talking a little trash. That’s what creates chemistry. It creates energy during practice.”

The offense started out slow with two consecutive three-and-outs, and Hasan had few responsibilities other than handing the ball off to Ke’Shawn Vaughn. On the third drive, however, Commodore fans got a glimpse at something they have not seen in a long time: a quarterback with the ability to run the ball. Hasan took off on a quarterback draw and scampered for a 12 yard gain.

The next drive was even better for Hasan and the Vanderbilt offense, as he tossed a beautiful 34 yard pass to Kalija Lipscomb and then flashed his wheels on a 21 yard run. Vaughn took care of the rest on that drive, rushing for a yard to put the Commodores up 7-0.

“He controlled the huddle,” Vaughn said. “He came in with good energy and that spread to the rest of the offense.”

Late into the third quarter with the Commodores up 14-7, Hasan took a shot to the head as he was trying to slide down from Missouri safety Tyree Gillespie. Gillespie was ejected for targeting, but Hasan struggled to get up and was unable to return to the game.

So along came Neal, who entered the game and promptly threw an interception that Missouri returned to inside their own ten yard line. The Tigers ended up capitalizing on the momentum swing, picking up another touchdown on a short, six yard rush.

Ultimately, the Commodore defense stiffened up and made up for the lack of offensive production, allowing them to hang on for their first SEC victory. However, if it weren’t for Hasan’s production early on, perhaps the outcome would’ve been a different story.

Hasan’s numbers weren’t anything to rave about; he finished with seven completions for 120 yards and a touchdown and nine carries for 39 yards. While he might not have been the most impressive on paper, it is undeniable that he brought something to this team that they were desperately lacking in previous games.

“Mo Hasan did exactly what I thought he’d do,” Mason said. “He brought energy to practice. You could see the energy of practice just rise a little bit because that dude competed. And it made our team different.”

There was a new sense of energy in this team from the opening kick. Every third down, the entire team was getting together to dance on the sidelines and after every big play they ran around the field in celebration. It seems as if this team is starting to figure things out and Hasan has a lot to do with it.