Students, community “Show up for Cyrus” 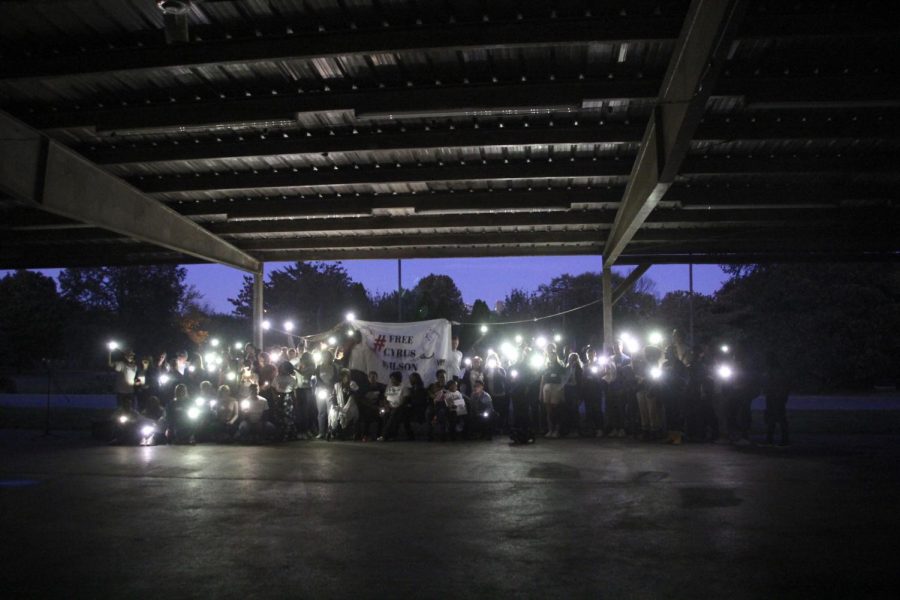 Supporters "shine a light" for truth at the Show Up for Cyrus event on Oct. 14

Since late March, Vanderbilt’s campus has been peppered with the distinctive white posters with simple black text and jarring statistics characteristic of the Vanderbilt Prison Project. Many of these contain a QR code which, when scanned, loads a petition in support of the release of Cyrus Wilson, a man who has been incarcerated for 27 years for a crime that he and his community of supporters have maintained for decades that he did not commit.

Over the last 8 months, the Vanderbilt Prison Project has become closely involved with the #FreeCyrusWilson campaign, leading letter writing campaigns, showing up to provide support at his April parole hearing and most recently helping organize the Show Up for Cyrus community event in Centennial Park on Monday, Oct. 14.

Wilson was sentenced to life in prison in 1994, when he was 19 years old, on a first degree murder charge. The original case, concerning the 1992 murder of Christopher Luckett, relied heavily on witness testimony from two juveniles who later recanted their stories. Despite those changes, the court rejected Wilson’s attempts to appeal. He is now 45 years old and is currently incarcerated in the Riverbend Maximum Security Institution.

“For him to be taken away from his family, over something that he didn’t do is the hardest thing a person would even have to live with,” Astreae Gordon, Wilson’s sister, said at a community event supporting his release. “I can only imagine what he’s going through and what he’s been through”

In mid-April, Wilson became eligible for parole and appeared in front of the board for the first time. At that time, the parole board voted to send Wilson for a risk assessment and psychological evaluation and hear his case again in six months, on Oct. 16. With that day coming up this week, the #FreeCyrusWilson campaign is working to showcase support for Wilson.

More than 80 people showed up at the Show Up for Cyrus event, at which members of Wilson’s family spoke about their beloved relative and the impact his incarceration has had on them.

“I will always hold my head up for Cyrus, I will always be there to support him, I can’t see him in a cage, because he’s not deserving,” Antoinette Hicks, Wilson’s cousin, said at the event. “Imagine that – 27 years of innocence. A person who helped everybody, trying to provide. It’s hard to survive out here; imagine surviving in a cage.”

The Tennessee Parole Board states on their website that community support is a factor considered in parole decisions. As such, the Show Up for Cyrus event was organized with the idea of reminding the parole board that many Nashvillians are actively supporting Wilson’s freedom just before he appears for his Wednesday hearing.

“If you’re not familiar with the parole process, it’s an extremely arbitrary process here in Tennessee, there are no guidelines, there’s not a checklist where you can check off things and say okay I’m going to definitely make parole,” Casey Wilson, Cyrus’s wife, told the audience.

Still, Wilson has done what was asked of him at the April parole decision – he was rated low risk by the requested risk assessment and completed both a cognitive behavioral class and a psychological evaluation. He and his family have been preparing for what his life will look like after he is free. He has been accepted to the job readiness program at Project Return and the Tennessee College of Applied Technology in Nashville, where he hopes to study automotive technology, and has been offered a full scholarship to the American Baptist College.

At the Show Up event, his family spoke about the type of man Wilson is – sophisticated, beautiful, giving.

“I tried to teach him as much as I could while I could, when he was young. But I didn’t get the chance to raise my son like I wanted to. The state took him from me and they let the prison system raise my baby,” Valerie Ehinlaiye, Wilson’s mother, said. “When you have a child that goes to the prison, people don’t realize that you are in prison, you are incarcerated as well, because the whole time he had to be there, I had to go and see him, in chains and locked up. I’ve been in prison for 27 years with my son because I love him and I’m going to stay by him as long as I can.”