Auston Kim: Playing with the Pros

Kim is one of the country's best young golfers, and she is taking both college golf and the pro tour by storm in just her second year on campus 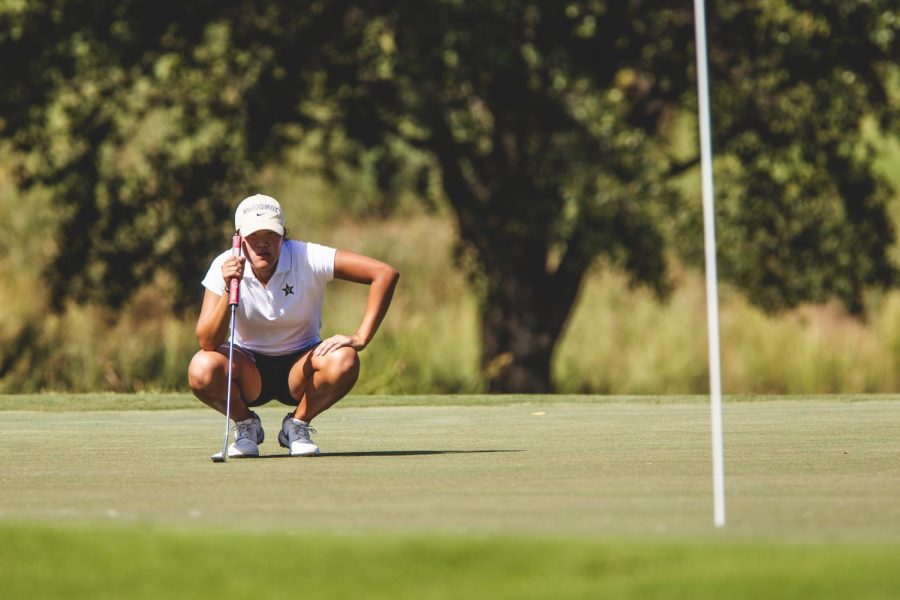 Auston Kim lines up at putt at the Mason Rudolph Championships on September 21, 2019.

Sophomore golfer Auston Kim almost chose to wear a different shade of black and gold for her collegiate career.

Kim was originally committed to Purdue, where her older sister August was a Big Ten individual champion.

Fortunately for the Commodores, the All-American stopped in Nashville on the way to her sister’s graduation, and head coach Greg Allen sold her on his program and the university.

Allen said, “In our sport, when somebody verbally commits, you really stop recruiting them and watching them. I got a phone call from her dad saying they were getting ready to drive up to watch her sister August graduate from Purdue, and they wanted to see if they could stop by and visit campus. She was going to decommit from Purdue and open up the recruiting process again, and that’s how we found her. Really, really glad she decided to do that.”

Kim made her mark on the Vanderbilt program in her freshman year. She had four top-three finishes as an individual, including a win in the NCAA Tournament Regionals in Auburn, Alabama. She led the team in scoring average as a first-year student-athlete, and in over 31 rounds, she averaged 72.55 strokes per round.

Her impressive showings in her first year as a Commodore, especially a 16th-place finish at the SEC Championships, led to Kim being named to the SEC All-Freshman Team and All-SEC First Team. Nationally, she was named a WGCA honorable mention All-American.

“She’s been an All-American,” Allen said. “And she definitely has the game to be probably our first four-time All-American.”

Kim is never one to settle. Despite the high praise, she worked tirelessly over the summer to improve both her short game and her mental game.

And speaking of summer, Kim had quite the eventful summer — she qualified for the US Women’s Open in April when she placed second in a US Women’s Open qualifier in Oregon. She shot a two-under par 142 in the 36-hole tournament, and she beat out many professional golfers to earn her spot at one of golf’s major tournaments.

Kim played with the world’s best professional golfers in Charleston, South Carolina at the US Women’s Open. After a nine-over par first round, she carded a two-under par 70 in her second round. Although she missed the cut by four strokes, Kim described the value of playing alongside and learning from the pros.

Kim said “I played with [World No. 2] S.H. Park, and it was really cool learning from her because she hits it really far, and her short game is really good. I played with the Jutanugarn sisters, who are really good as well, and they have a really strong mental game. I played with Marina Alex, who was an alum here. She was super nice and very helpful.”

Kim has not missed a beat since she’s returned to campus this fall. She won the first tournament of the year at the Cougar Classic in Hanahan, South Carolina. She carded a 16-under par 200 over three rounds of golf to win the tournament by seven shots over teammate Louise Yu.

Kim said, “One of my goals was to win a tournament in the fall, and I’ve already done that, so it’s just trying to keep on going and push further from where I started this year.”

Now that her first goal is checked off her list for next year, the sky’s the limit for Kim. She is working hard to win an individual SEC title to match her older sister’s Big Ten title.

She hopes to play in Europe this summer and dreams of playing in both the US Women’s Open and British Open in 2020. And judging by her incredible drive, both in terms of her intrinsic drive to succeed and her long drives off the tee, she can accomplish it all.