What to Expect: Global Warming The Musical

See how junior Foster Swartz grew a small project for a screenwriting class into to a full-blown cinematic production when "Global Warming: The Musical" premieres in Sarratt Cinema Oct. 11 & 12 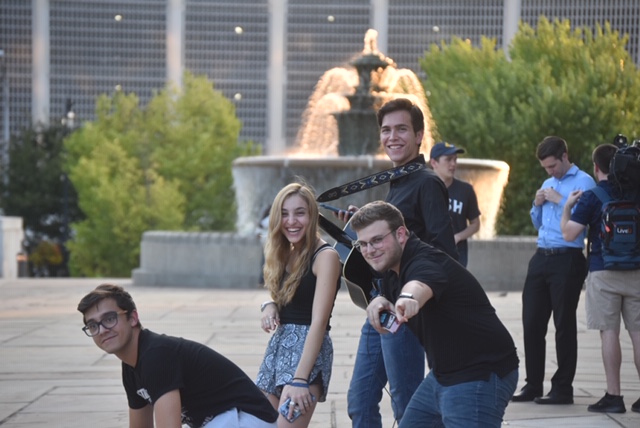 What is global warming? To some, it may be the imminent doom of the world, but to junior Foster Swartz it’s developed into something much more fantastical: a murderous beach spirit set out to ruin his show. “Global Warming: The Musical,” written, composed and directed entirely by Swartz, debuts this weekend at Sarratt Cinema. This beach-rock musical follows teenagers celebrating the start of summer with romance, rock ‘n’ roll and rum galore– until they’re slowly picked off by the one, the only, Global Warming.

“When I write theatre, I am always haunted by this notion that I wasn’t doing enough to solve the problems of the world,” Swartz said. “My entire life, I’ve had this messianic complex regarding global warming, that it’s my responsibility to solve it. Yet, I wasn’t doing that at all.”

Swartz started creating the show this past Valentine’s Day with a song inspired by Elvis Presley. This song grew into a project he wrote for his screenwriting class with Vanderbilt theatre department’s writer-in-residence Professor Krista Knight. From there, he expanded the project, rented out Sarratt Cinema and made the choice to bring the show to the stage with his production team, what will soon be known as Iceberg Theatre Company.

The show’s entire cast and crew jumped to help by running a summer drive to fund the show, holding rehearsals everywhere from student dorms to Buttrick Hall and even building the set in Swartz’s dorm. From workshopping the show at the Yale Summer Conservatory for Actors to fine-tuning the story into a personalized show here at Vanderbilt, their efforts were tireless to create a show for all of campus to see.

“He called me at around 4 a.m., and he said, “We’re going to make this happen.” He asked me if I wanted to be a part of it,” stage manager Bryce Palmer said. “Since then, it has grown on me a lot. Foster is so inspirational in his refusal to be deterred by anything. I was willing to do whatever he needed, and from then on, I was the stage manager.”

Due to their gratitude for those who donated to the Kickstarter, Swartz and the Iceberg Theatre Company have decided to take this show and give back to the people who funded it. Certain donors received interactive, front-row “splash-zone” seats, and others got creative with their earned naming rights to characters to the show. The cast and crew have spent countless hours building the set, making costumes, running scenes and bringing this idea to life. They were able to preview a few songs from the show at the Nashville Climate Strike protest and the McGill Coffeehouse. Both brief but powerful performances had the crowd dancing along with them.

To see what “Global Warming: The Musical” has become, come to Sarratt Cinema Oct. 11 and 12 at 9:00 p.m. Tickets are free for all Vanderbilt students and are available to visitors at the door for $5.