Vanderbilt came into Saturday night with a perfect opportunity to right the ship and pull off the upset. Instead, the ship sank in Titanic-like fashion. 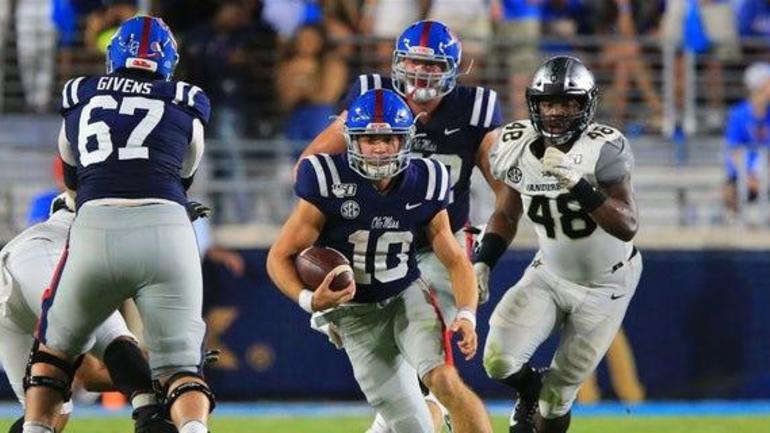 This one was painful.

This one was the type of game that made you want to turn the TV off just so you didn’t have to submit yourself to the torturous, one-sided football that took place Saturday night. The Commodores squandered what could have been a golden upset opportunity on the road against a true freshman quarterback and a struggling Ole Miss squad, falling 31-6 in a letdown of epic proportions.

Vanderbilt trailed by just four points at halftime. The game was well within striking distance. That was before the Rebels turned on the jets, ripping off one big run after another to open up the game in the third quarter, and they never looked back.

Disappointment doesn’t begin to tell the story of this matchup. It was the kind of matchup with few, if any, positive takeaways, and it will leave head coach Derek Mason with tons of questions and virtually no answers. Job security might very well be one of those questions.

Here is your Commodore Brunch Menu for this week:

From the very first drive, the Ole Miss game plan was clear. The Rebels wanted to establish the run, and a 54-yard scramble from quarterback John Rhys Plumlee on just the second play from scrimmage assured them right away that they could do just that. For four quarters, the Rebels ran on Vanderbilt’s defensive front with ease, amassing 413 yards on the ground in the process. That total marked the third most yards allowed by the Commodores in the Mason era.

After Plumlee’s 33-yard touchdown run on the ensuing drive, Ole Miss came out in the second half and broke off a few more big gains on the ground to end the ballgame. True freshman running backs Jerrion Ealy and Snoop Conner rattled off 78-yard and 84-yard touchdowns, respectively, to extend the lead. Senior tailback Scottie Phillips’ house call in the fourth quarter put the cherry on top.

Vanderbilt’s defense has been susceptible to the big play all year. Jason Tarver’s unit has missed tackles at alarming rates, but this – this was a new low for the Commodores. It’s hard to rationalize giving up 500-plus yards through the air one week and 400-plus yards on the ground another. It’s an indictment of this entire defense on all three levels.

Vanderbilt has failed to set the edge time and again at the line of scrimmage. Andre Mintze or Elijah McCallister simply aren’t wide enough on the outside and it costs this team dearly. Linebackers are taking exceptionally poor routes to the ball, misjudging angles and finding themselves flatfooted. What became even most evident Saturday night, however, was that the secondary lacks speed, and that’s a scary thought with several SEC games still on the schedule. Plumlee ran away from the defense on the opening couple drives. Ealy and Conner left the secondary in the dust too. One of the worst things you can be as a defensive back is slow, and Vanderbilt’s defensive backs looked slow on Saturday.

This defense is statistically the worst defense in the Power Five. Vanderbilt gives up an average of 504 yards per game, worst among Power Five teams. Its 37.4 points allowed per game is second worst, just barely ahead of UCLA. That’s not a recipe for winning SEC football games.

Just when we thought the quarterback battle was behind us, that Riley Neal had cemented the job, he put up another dud. Vanderbilt is about to be halfway through the season without any clarity at the most important position on the field. Neal struggled mightily again on Saturday, completing 18 of 30 passes for just 140 yards and a 32.6 quarterback rating. It’s a stat line that Vanderbilt fans have come to expect from Neal, devoid of any numbers that jump out of the box score and filled with ones that scream “meh.”

Offensive coordinator Gerry Gdowski has made it clear thus far that he doesn’t trust Neal in the downfield passing game. His play calls have reflected that. The Commodores run more bubble screens than downfield passing plays, more short out routes than deep shots. Perhaps Neal struggles in a vertical passing scheme because Gdowski doesn’t present him with one. Perhaps Gdowski doesn’t present him with one because he knows Neal can’t execute it. It’s hard to say for sure, but the quarterback play at the moment leaves a lot to be desired.

It got so bad Saturday that Mason pulled Neal in favor of backup quarterback Deuce Wallace, marking the fourth game this season that he has benched his starter. The problem lies in the fact that Wallace hasn’t looked any better than Neal. Maybe giving Wallace a week of first team reps and starting him against UNLV as a tune-up game for the rest of SEC play will alleviate that. Wallace might not be the answer, but if anything has become clear thus far, it’s that Neal certainly isn’t.

The body language of Vanderbilt’s receivers tells the story: they don’t have confidence in Neal. At least five times every game a Vandy receiver walks off the field with his head down after an extremely errant throw from Neal. Tight End Jared Pinkney got into a shouting match with coaches after an overthrown ball that should have been an easy touchdown against Northern Illinois. It’s getting hard to blame him at this point.

Vandy Twitter was at its finest Saturday night, calling for Mason’s head and urging athletic director Malcolm Turner to fire his head football coach. That frustration is valid. It’s warranted. But firing Mason isn’t the answer, at least not yet. This isn’t the start to the season that most people expected and a bowl game looks as far off into the distance as ever, but Mason isn’t totally to blame.

Simply put, this roster isn’t good enough to make a bowl game. That’s often lost in the conversation because of Vanderbilt’s “Big Three.” While the Commodores are wildly talented and deep at the skill position spots, they aren’t talented in the position groups that matter most. SEC football is won in the trenches. Vanderbilt doesn’t have the offensive line or the defensive line to win at the line of scrimmage and it continues to cost them. Neal is routinely under pressure before he can complete his three-step drop.

It’s easy to get lost in the 1200 returning rushing yards from Vaughn or the 1700 returning receiving yards from Lipscomb and Pinkney, but without an offensive line to open holes or a quarterback to accurately deliver the ball, those numbers won’t help them win games. This is a team that lost a lot of guys last year in important positions and that isn’t something a college football team can recover from right away. This is a rebuilding year that was misbranded because of elite skill position talent. That doesn’t completely fall on Mason.