The Black Keys bring “Just A Little Heat” to Nashville

After a five-year hiatus, the infamous Black Keys are back and as good as ever with their "Let's Rock" tour, which came to Bridgestone Arena Oct. 1. 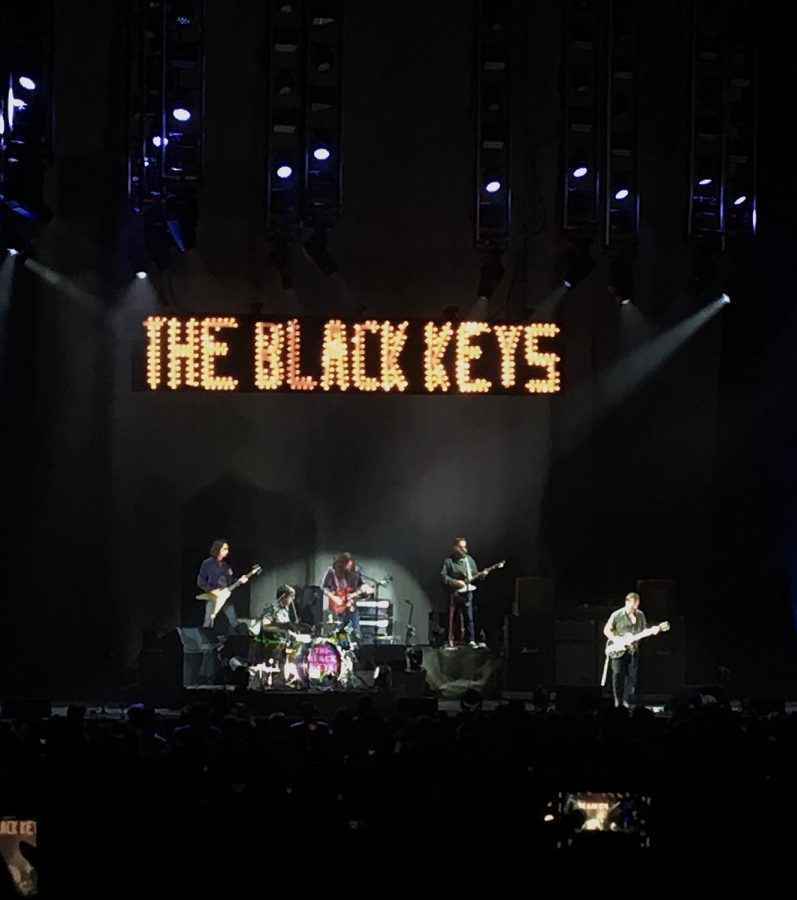 After nine studio albums, ten top 20 hits and more than a decade and a half of songwriting, The Black Keys in 2019 could easily be mistaken as aging rockers suffering from some well-earned fatigue. Their Oct. 1 concert in Bridgestone Arena rejected these assumptions, which highlighted the band’s characteristic confidence and grit.

Though the Keys are currently touring their latest album, “Let’s Rock,” the concert’s set spanned their entire career, representing the duo’s early 2000’s lo-fi fuzz in near equal proportion with their newer, glitzy sound. Launching the show with the Zeppelin-esque riffing of “I Got Mine,” drummer Patrick Carney and guitarist/singer Dan Auerbach effortlessly transitioned to some of their newest material, like the neo-blues of “Double Eagle” and pop-soaked guitar-work of “Tell me Lies.”

The band incited the most thunderous applause of the night when playing material from their breakthrough albums “Brothers” and “El Camino” — hits “Gold on the Ceiling” and “Howling for You” had teens and millennials near my seat dancing and belting the lyrics (myself included). The band performed their most renowned hits with studio-like precision, adding some live flourish through their improvised guitar fills and slight variations of their catchy vocal melodies.

The band’s impressive showing on Tuesday likely had to do with their modified tour lineup. Transitioning from the synthy atmosphere of 2014’s “Turn Blue,” the Keys stepped on stage without a keyboard in sight. Instead, the band sported two extra backing guitars and a bass, reinforcing Carney and Auerbach’s traditional guitar-drum dynamic. These additions brought the band enough flexibility to handle both the multi-octave arrangements of songs like “Fever” and the raw guitar workouts of “Your Touch” and “10 am Automatic.”

The highlights of the evening were the much-welcomed improvisation and freshness in song arrangements. After seeing Auerbach tear space-fabric during his solo on “Walk Across the Water,” I’ll never cease to wonder why the band’s studio recordings tone down the heart-racing instrumentals of their live shows. A personal favorite moment of the evening happened in the middle of the set: a rendition of “Everlasting Light,” crooned with distorted falsetto and layered with near-Hendrix chord and solo-guitar work.

I fell head over heels for what Auerbach labeled “oldies” and “basement music,” which consisted of scrappy tunes from the band’s lo-fi roots. “Thickfreakness” and “10 am Automatic” are some of my favorite rock songs, period. It joyed me to no end to see them given the “arena” treatment despite their lack of commercial appeal.

For their encore, the band played “Lo/Hi,” “Go” and “She’s Long Gone” under an enormous, inflated electric chair—an homage to the album cover of “Let’s Rock.”

That being said, the concert’s greatest shortcoming was its questionable decision-making in terms of the first and last songs of the set. This tour marked a much-anticipated return following a five-year break, and I can’t say that the first Black Keys song I wanted to see again was “I Got Mine”. The band also wasted a fantastic opportunity to end their encore on the shining moment of “Let’s Rock”—the groovy bridge of “Go,” which instead was followed by the basic blues-rock jam of “She’s Long Gone.”  The concert, as a result, finished on a slightly less inspired note.

Still, Carney and Auerbach exceeded expectations for their comeback tour and certainly delivered on the Black Keys’ legendary success. 17 years later, the boys from Akron, Ohio have still got it.