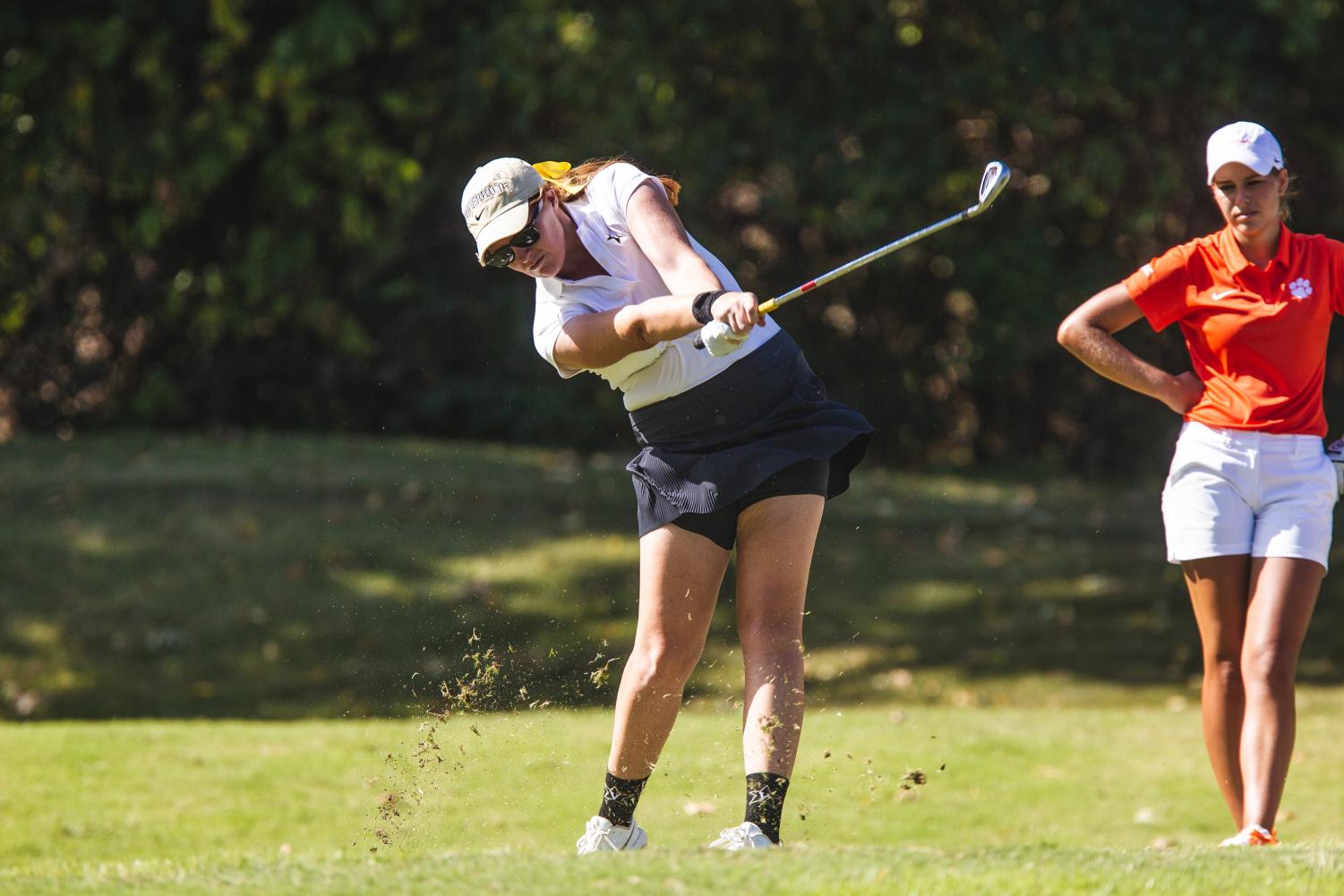 On Thursday, Sep. 26, Abbey Carlson sat down with The Vanderbilt Hustler to discuss her recent performance at the Mason Rudolph Championship.

Carlson, the lone senior of the Vanderbilt Women’s Golf program, shined in the final home tournament of her collegiate career. She posted a 68 in the first round, good for her seventh straight under-par round and her fifth sub-70 round in the past six she’s played at the Mason Rudolph Championship.

“It was really bittersweet,” she said. “Playing for the Mason’s, it’s just like playing home. It’s always fun. This tournament was the last time I get to play in front of friends and classmates and have that experience. It was a really, really fun moment, and I was very emotional — in a good way, of course.”

The Commodores were hoping to sweep both the team and individual competitions for the second straight year, but ultimately fell short. They placed second to the Houston Cougars in the team competition, with Carlson finishing just two strokes behind the leader for the individual medal.

One of the highlights of Carlson’s career came in her junior year, when she was able to claim that elusive individual medal. But still, a year later, her second place performance was arguably more meaningful. 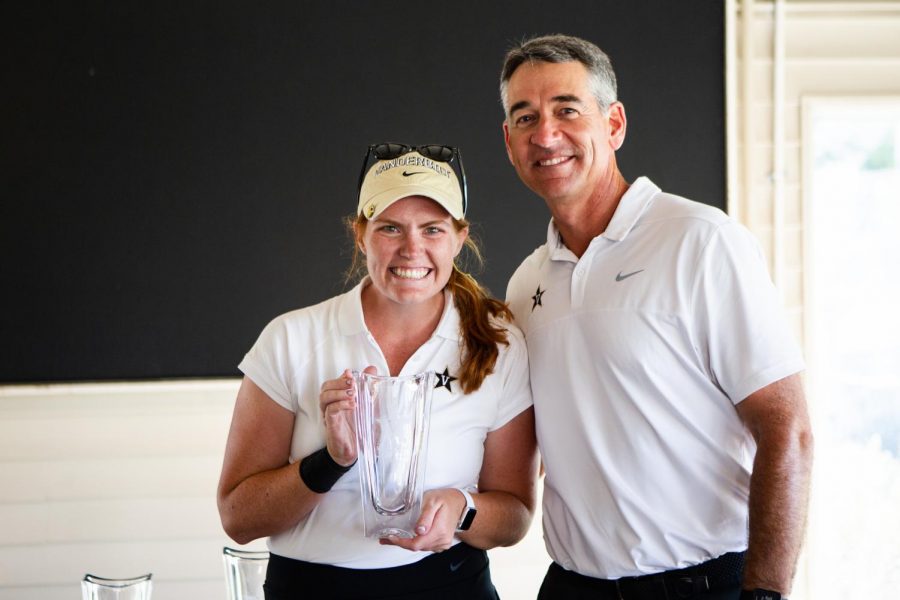 Gallery|2 Photos
Hunter Long
Abbey Carlson and Coach Greg Allen pose for a photo with her award at the Mason Rudolph Championship (Photo by Hunter Long).

“Of course it felt good to win it my junior year, but it felt like this year was more special to me just because of the number of friends and family I had there. My sister came up and surprised me, I had a professor come out and watch, then I had a bunch of friends there too. All of that just means more to me than the golf itself.”

The entirety of Carlson’s collegiate career can be summed up in that final clause — the experience is more meaningful than the golf itself. After all, that’s why she chose Vanderbilt in the first place.

“I don’t want to use the cliché that every athlete probably tells you, but it’s really why Vanderbilt was a good fit for me,” she said.

When Carlson was in high school, she committed to Vanderbilt University because it was the only school that could provide her with the best of both worlds: a world-class education coupled with a reputable, competitive golf program.

Sure, her response seemed a bit cliché. Maybe Carlson was right. But as the interview wrapped up, Carlson began discussing her interests off the course.

The aerospace engineer’s response quickly became everything but cliché.

“So when I was in high school, I actually built an airplane for a high school class,” Carlson mentioned, as if the feat was no more impressive than sinking a putt from five feet out. “Then I got my pilot’s license, so I guess that explains why I’m so interested in aerospace.”

At Vanderbilt, it’s commonplace for student-athletes to excel both on and off the field. Carlson’s case, however, is far from typical. Her achievements make her an extraordinary embodiment of the Vanderbilt mold.

In her first year as a Commodore, Carlson proved her worth on the green. She was named to the SEC All-Freshman Team and the SEC First-Year Academic Honor Roll, before improving her craft as a sophomore. It paid dividends in her junior campaign: in addition to winning the individual title at the Mason Rudolph Championships, Carlson was named to the All-SEC First Team. She ranked as high as 64th in the country (according to Golfstat), and was selected to represent the United States at the 2019 Arnold Palmer Cup. All the while, she was named to the ANNIKA Award watch list, an award presented annually to the most outstanding collegiate female golfer. 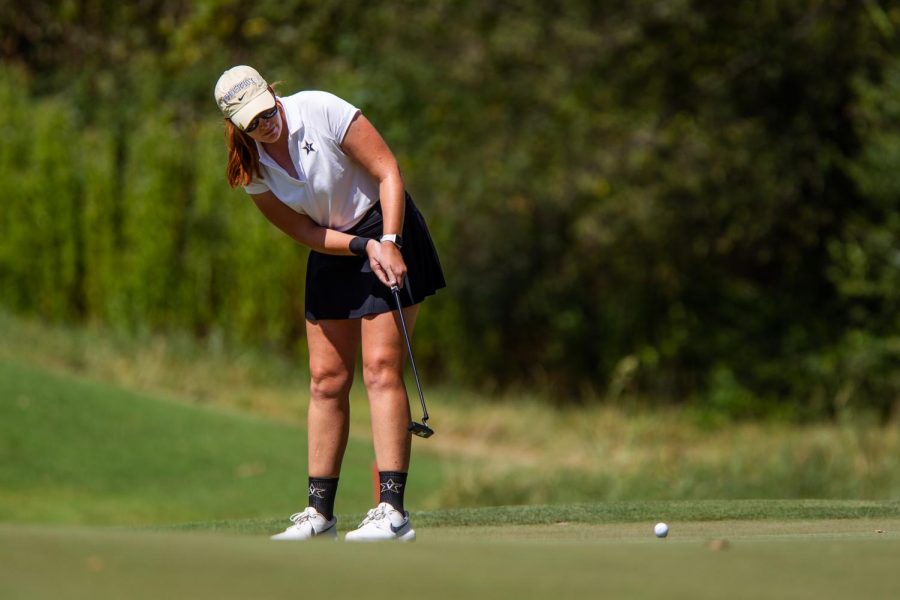 In other words, Carlson was in conversation for the crown-jewel of golf awards, solidifying her spot among the nation’s best.

But in truth, that hardly scratched the surface of her eventful junior year.

“I’m also on the rocket team,” she said. “We compete in the NASA student launch, which is a nationwide competition for building and designing a rocket with a specific payload. This year, we’re tasked with creating a sampling tool that can find and locate a specific target and collect 10 milliliters of a sample, and then move it ten feet.”

Carlson’s involvement in the club meant even more hardware. Last year, the Commodore rocketeers took home the national championship at the NASA student launch — for the sixth time (in just twelve years of competing).

“Creating the rocket itself isn’t really the difficult part,” she claimed. “It’s usually the payload that takes longer. You put it on a launch ramp, throw a rocket engine on the back and off it goes, whereas the payload has a lot more interfaces and we have to make sure it’s loaded and constrained properly.”

While this year’s assignment is to locate and move a sample, last year’s award-winning design presented a different task. One that Carlson sees as straightforward.

“Well of course it took a lot of blueprinting, practicing, and work, but the assignment itself was pretty straightforward. Our project fulfilled the guidelines. Basically, the rocket went up, came down, landed, rotated itself, opened up, and then a UAV unfolded and took off.”

On the links, Carlson is one of the nation’s best. Her Commodores, now ranked ninth in the country, will compete in the Windy City Collegiate Classic on Monday, Oct. 30 hoping to build upon their success in early 2019.

“My freshman year, I came in and felt like the team wasn’t much of a cohesive unit. Now, we’re about as tight-knit as can be, which is important in an individual sport like golf. We root for each other, support each other, and you can see it in our scores. Over the years the program has changed for the better, and I’m so happy to have spent my time here.”

As for off the links?

Well, the aerospace engineer — fresh off her summer internship as a systems engineer for Boeing — should be quite alright.