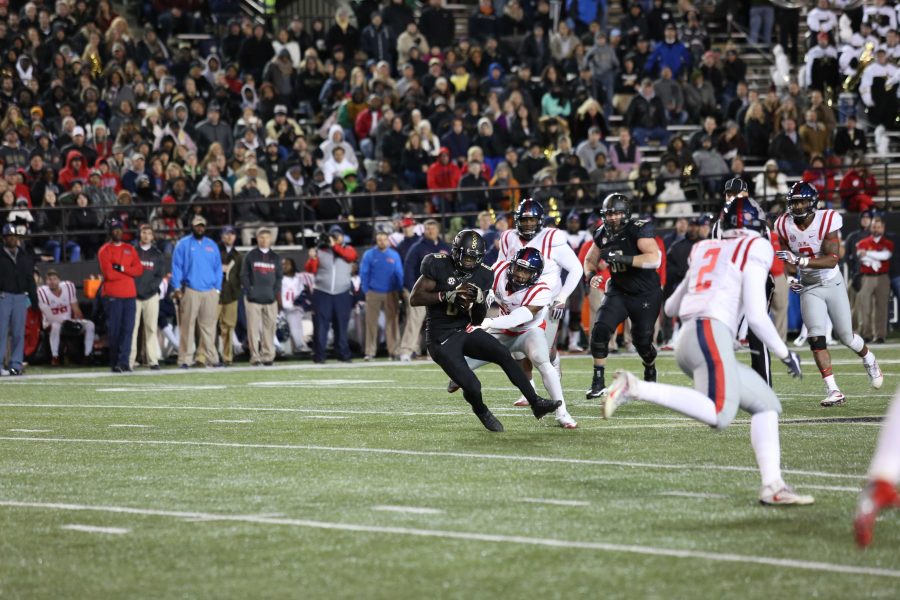 Just a week after losing to Mizzou on the road, the Vanderbilt Commodores came out and beat Ole Miss in Nashville 38-17. It was an all-out performance filled with defensive prowess, an incredible offensive showcase and moments that could make any Commodore fan smile.

After conceding the first 10 points of the game, Vanderbilt proceeded to score the next 31 and put the game out of reach. Ole Miss did not score another point until a touchdown early in the fourth quarter.

A big reason for this offensive explosion was how balanced the Commodores were. Early in the season, the team relied heavily on the run game. After an injury to running back Ralph Webb, quarterback Kyle Shurmur stepped up and became the focus of the offense.

Against Ole Miss, everyone got involved and Commodores looked as well-rounded as they’ve ever been.

Shurmur threw for 273 yards on 17 completions with two touchdowns, while Webb rushed for 123 yards on 20 carries for three touchdowns. In addition, six Vanderbilt backs got touches during the game, rushing for over 200 yards overall.

According to head coach Derek Mason, that balance was absolutely necessary to get the win.

This kind of offensive balance is a long time coming for Vanderbilt. That kind of offense could have helped them beat South Carolina or Florida this season. But, even though it did come late in the season, it happened in an explosive fashion and really made a statement. If it had to come together late, Coach Mason should be happy it did like this.
Overcoming Adversity
Vanderbilt came out on the wrong foot in this game, and looked like they were destined for doom again. On the very first drive of the game, Ole Miss marched 75 yards down the field in nine plays and just four minutes and nine seconds to take a 3-0 lead. A slight delay by the officials in setting the ball spot in the red zone might have slowed the drive down enough to prevent a touchdown, so the Commodores caught a break.

Then, after forcing a three-and-out on the very next drive, Commodore returner Darrius Sims muffed the ensuing punt. The Rebels recovered the ball and scored a 21-yard touchdown on the next play.

Conventional wisdom would say that at that point, down 10-0 late in the first quarter, Vanderbilt had already lost the game. However, this night would be different. Two drives later, Shurmur connected with Trent Sherfield on a 67-yard pass to set up a Webb touchdown right after.

Not only did the Commodores dominate this game, but they also did so after a really rocky start. Their newfound ability to overcome a bad start is another good sign going forward as the season winds down.
Stopping Shea
After a showstopping performance against Texas A&M, Ole Miss true freshman quarterback Shea Patterson came into this game with a lot of hype. In the press conference on Tuesday, DL Adam Butler called Patterson “shifty” and noted that Vanderbilt defenses had trouble with these type of quarterbacks in the past.

There was no trouble this time.

As some pointed out, Patterson seemed to run for hundreds of yards laterally, but couldn’t get downfield and ended up being credited for just 32 yards rushing. He threw for 222 yards and two touchdowns, but overall, the Vanderbilt defense seemed to be able to keep him in check.

Vanderbilt sacked Patterson three times on the night, and seemed to give him trouble when he tried to use his speed to scramble and make plays. Mason said after the game that there is a very simple strategy to slow him down.

“Let him get tired.”
Here Come the Vols
The Commodores have one regular season game left before potentially sneaking into a bowl game, and it’s at home against the rival Tennessee Volunteers. The Vols are coming off a scary win over Mizzou, in which they gave up over 700 yards of offense and still managed to come out with a win.

If Vanderbilt can muster this kind of offensive performance against Tennessee, they have a good chance of winning.

All of the stars are aligning for a Vanderbilt upset over Tennessee next weekend. First, Florida has already clinched the SEC East and a trip to the conference championship, so that is out of Tennessee’s reach. They won’t really have anything to play for but pride.

The ‘Dores kick off against Tennessee next Saturday at 6:30 p.m. central on SEC Network.

And remember, Hugh Freeze got one of his own linebackers ejected against Vanderbilt.