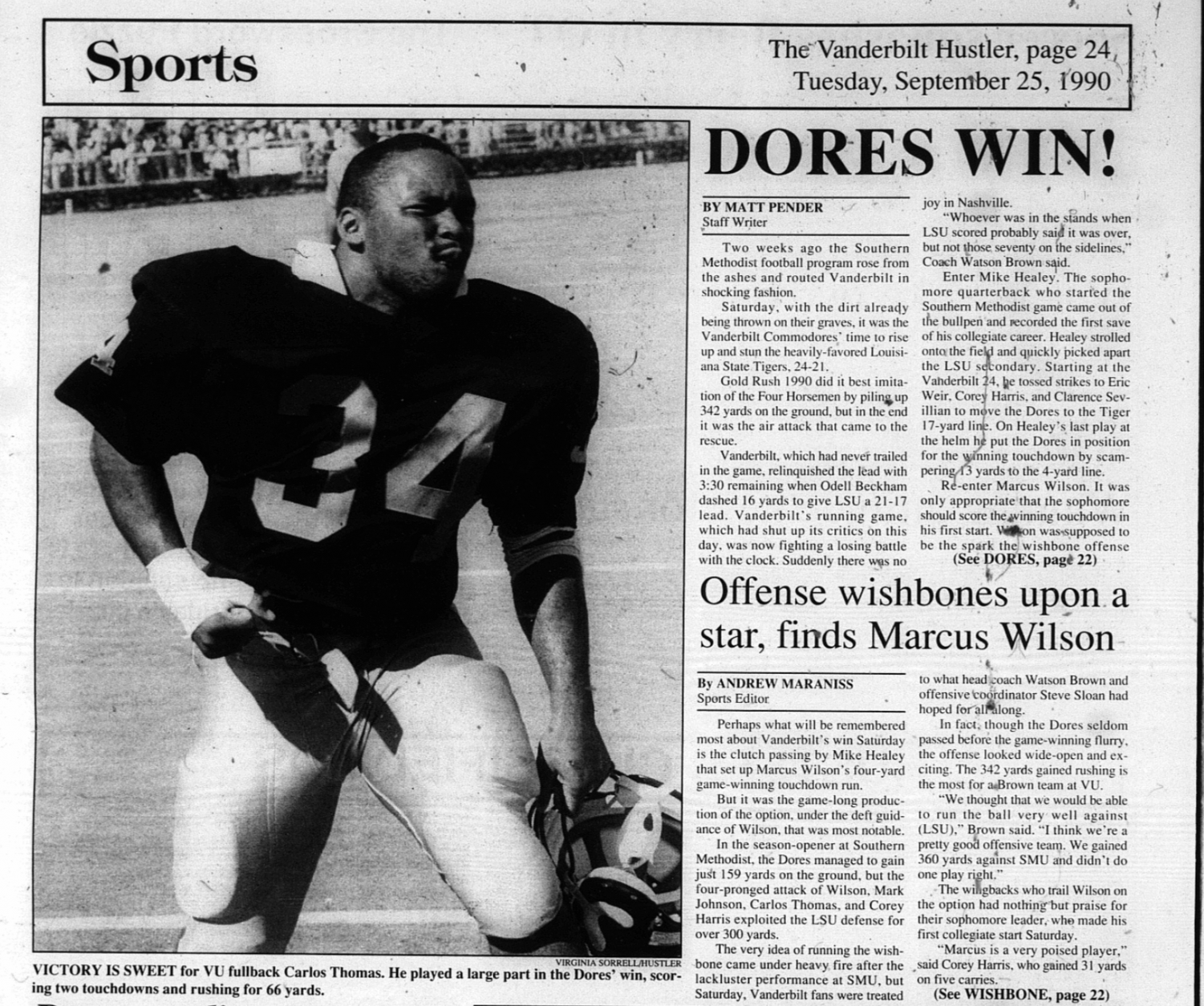 The front page of the The Vanderbilt Hustler's sports section on Sep. 25, 1990. (Photo courtesy Hustler archives)

The front page of the The Vanderbilt Hustler's sports section on Sep. 25, 1990. (Photo courtesy Hustler archives)

Battle with the Bayou: Revisiting Vanderbilt’s last win over LSU in 1990

A late LSU touchdown nullified by a flag gave Vanderbilt a 24-21 win -- their only win of the season. The Commodores have not beaten the Tigers since.

It’s been 29 years since that day — that monumental upset — that downright dumbfounding, laughable, lucky win.

On Saturday, Sept. 21, the Vanderbilt Commodores will face the fourth-ranked LSU Tigers for the first time in nine years, but they haven’t won in over three times as long. Let’s rewind the clocks 10,590 days to that game; the last time the Commodores defeated the Tigers on Sept. 22, 1990.

You won’t believe how it happened.

Troubled Times for The Black and Gold

To the fans that were disappointed when Vanderbilt lost to Baylor in the 2018 Texas Independence Bowl, consider this: in 1986, Head Coach Watson Brown led the Commodores to a 1-10 record in his first season at the helm. By definition of the word “improved,” the Commodores improved in 1987. They went 4-7 without a single win in conference-play. In 1988, Vanderbilt followed up the lackluster performance with a 3-8 record; however, those three wins all came in the Southeastern Conference.

It took three years for Coach Brown to get some momentum on his side. Finally, heading into 1989, the Commodores had tangible evidence — three SEC wins from the year prior — to show that they meant business.

Coach Brown led the Commodores to a tumultuous one-win season for the second time in four years. Their one win came against the Ohio University Bobcats, a team that also went 1-10 and somehow managed to lose to Eastern Michigan, Western Michigan, and Central Michigan all in that same season.

The bar was set so low for the Commodores that Coach Brown, who was 9-35 through four seasons, still somehow had the job.

But alas, in year five, the Commodores had hope. They felt especially confident entering their first game of the season against the SMU Mustangs.

“We had really high expectations” Carlos Thomas, former Vanderbilt fullback, told The Vanderbilt Hustler. “This was the third year that my cohort was there, so we felt like we were poised to do some really good things. Plus, the first game of the season, we played SMU. They were one year removed from a death penalty, so they were literally starting off from scratch.” 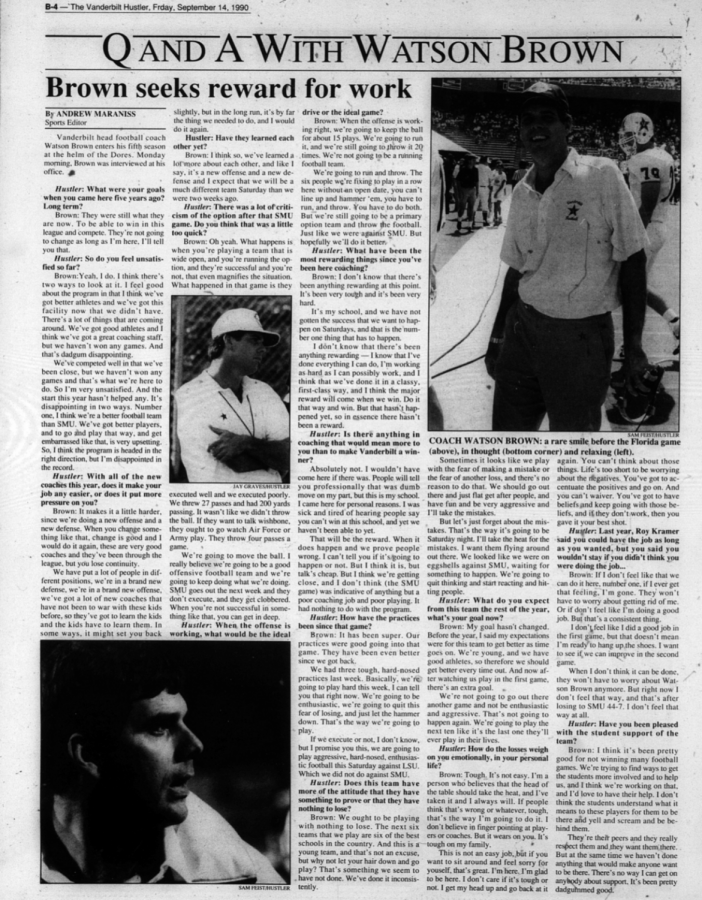 As Thomas pointed out, SMU was fresh off the death penalty, the harshest penalty the NCAA can hand to a member institution. In 1986, the school was penalized for its third major recruiting violation, as 21 players had received approximately $61,000 in cash payments from team boosters. This death penalty meant that SMU’s entire 1987 season was cancelled, with an extended probation lasting until 1990. They lost 55 new scholarships over four years, so by the time their 1990 matchup with the Commodores rolled around, nearly their entire roster consisted of walk-ons.

It seemed like a walk in the park for the favored SEC team.

“Oh man, we were so confident. It was horrible,” Thomas recalled. “That’s what made it so painful. We went down to SMU ready to crush them and we lost 44-7. As you can imagine, all of these high expectations just completely fell flat.”

The Commodores entered their Week Two bye with nothing to look forward to; only disappointment loomed in their minds. 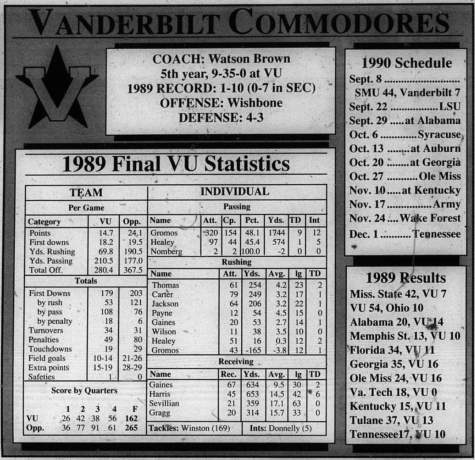 “So with the bye week, we had two weeks before we met with LSU, similar to this year’s meeting,” Thomas said. “We basically scrimmaged every day. I mean, we were just knocking the s— out of each other in practice. By the time that the LSU game came around, Coach Brown really had a completely different demeanor. Usually he was kind of laid back and calculated, but he was fired up. We had nothing to lose. We just wanted to go out there and leave it all on the line.”

Hanging with the Mighty Tigers

“The LSU Tigers were no joke. They were definitely to be taken seriously,” Thomas said.  “I think they were ranked 17th in the nation at the time. The game was on national television, which was a rarity back then. We kicked off to them to start the game, if I remember correctly.”

Everything about this matchup favorited the Tigers, and that started with the opening kickoff.

In their first matchup against SMU, the Commodores rolled out perhaps the most unconventional, unheard of, cry-for-help of a strategy in football: a kicker by committee. Surely enough, both kickers missed their only field goal attempts, so Coach Brown was forced to pencil in a starting kicker for their second game, hoping it would alleviate some of the pressure. 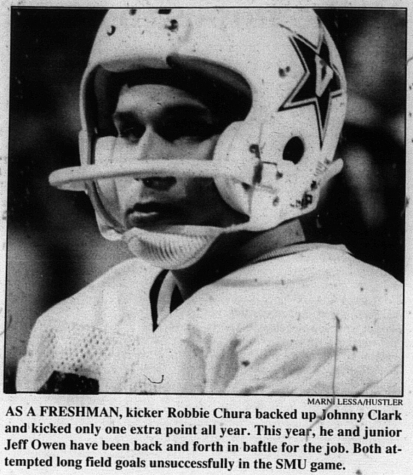 So when the two teams lined up for kickoff, Vanderbilt, sporting their basic, all-black jerseys, remained silent. Their only vocal leader — the man who, quite literally, was to decide when the game would start — was the newly named starting kicker, Robbie Chura.

All five feet, four inches and 145 pounds of Chura squeaked as powerful a kick as possible to start things off.

Surely enough, Vanderbilt responded with their first sign of life in the form of a jarring hit on the LSU kick returner. Maybe now people would pick Vanderbilt to win, right?

“Hell no!” Thomas laughed at the prospect. “Are you kidding me? First of all, we’re Vanderbilt. Second of all, we just lost to what very well could have been the single worst team in the entire country. Not only did we lose, but we lost 44-7! Dating back to the year prior, we were on a nice, ten-or-so game losing streak. Vanderbilt beating LSU was absolutely unheard of!”

But they continued their rhythm, as Vanderbilt garnered plenty of attention with their first half performance. The Commodore defense looked stout, holding the LSU offense to just one touchdown– and it didn’t come until late in the second quarter. After a shockingly uneventful first half, the Commodores held a 10-7 lead.

“We were running the triple option to perfection,” Thomas said. “Marcus Wilson was the quarterback, and he was picking really good reads on the corner, as to determine whether or not he should give the fullback the ball, tuck the ball and run with it or pitch the ball. It was a really even-handed approach, and LSU just couldn’t seem to figure it out. Their reads on defense were horrible, so we moved the ball at will during the first half.”

Vanderbilt extended their three point lead when Carlos Thomas rushed for his second two-yard touchdown of the game, but LSU quickly struck back in the form of an Odell Beckham touchdown run. To reiterate, the last time Vanderbilt beat LSU, Odell Beckham Sr. was a star running back for the Tigers. 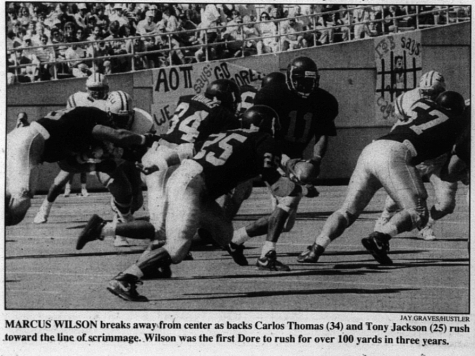 After the two traded blows in the third quarter, the Commodores led 17-14 heading into the fourth. They were still underdogs. Nobody thought they’d pull it off, and that doubt was confirmed by another Odell Beckham touchdown to start the fourth quarter, giving LSU a 21-17 lead, their first of the contest.

But the Vanderbilt Commodores never had a care in the world about who was favored. Regardless of the score, they knew they’d keep fighting until the last whistle.

“Whoever was in the stands when LSU scored probably thought it was over,” Coach Brown said after the game. “But not those seventy on the sidelines. They had something else in mind.”

The clock continued to tick, until Coach Brown made perhaps the most questionable coaching decision in Vanderbilt history.

Marcus Wilson was on a roll conducting the triple-option offense, but for some inexplainable reason, Brown opted to pull the plug. For the first time in this game (and for the first time since his Week One performance awarded him a spot on the bench), along came quarterback Mike Healey. He trotted onto the field trailing by a field goal with less than two minutes left. In college sports, there are some things you just can’t explain. Like the coaching decision. Or Healey’s ensuing performance.

He took the field with a vengeance and thread the needle through LSU’s defense with apparent ease. Three complete passes and a 13 yard scramble later, the Commodores were on the opposing four yard line. With roughly a minute left on the clock, a touchdown could seal the deal.

But Brown decided that the sophomore had done his due diligence, so in the middle of the possession, he switched quarterbacks once more. Wilson re-entered the game and immediately ran the triple option. 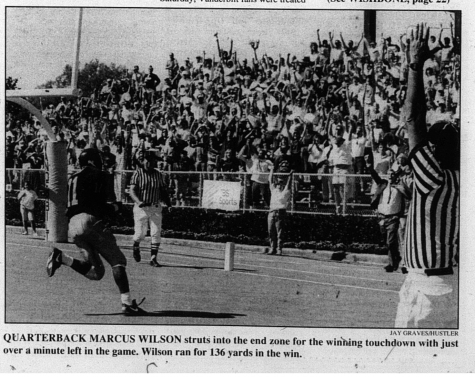 Wilson, untouched, jogged his way into the endzone. Touchdown, Commodores. There was just one problem with the Commodores’ 24-21 lead: LSU had a minute left to respond.

“Man, keep in mind now: we found a way to lose games, and lose them badly,” Thomas said. “Sometimes, the way we blew games was nothing short of impressive. So in my mind, I was just like, ‘oh lord, please. Let’s not lose this one.”

Thomas wasn’t the only one who felt the nerves. Coach Brown echoed Thomas’ worries. This would be their first (and arguably, their only) big-time win in his fifth year as head coach.

“I don’t know how your heart could stop beating for that long and you still live.”

LSU managed to get a mere few yards before burning their last timeout. Less than ten seconds remained, so they had no other choice. They called a Hail Mary.

As fate would have it, Vanderbilt had a hero in the form of a small yellow handkerchief, thrown onto the field by the referee. While the clock had already expired, the official threw a penalty flag and charged Kinchen with offensive pass interference.

The penalty nullified the touchdown and the clock had already expired, so Vanderbilt snuck away with a 24-21 win.

“Did he push Derek? Yes. But was Derek already falling over? Oh absolutely,” Thomas recalled. “It was a push, but it was an aided push. He didn’t really have to exert much force for Derek to hit the ground, considering he was already halfway there.” 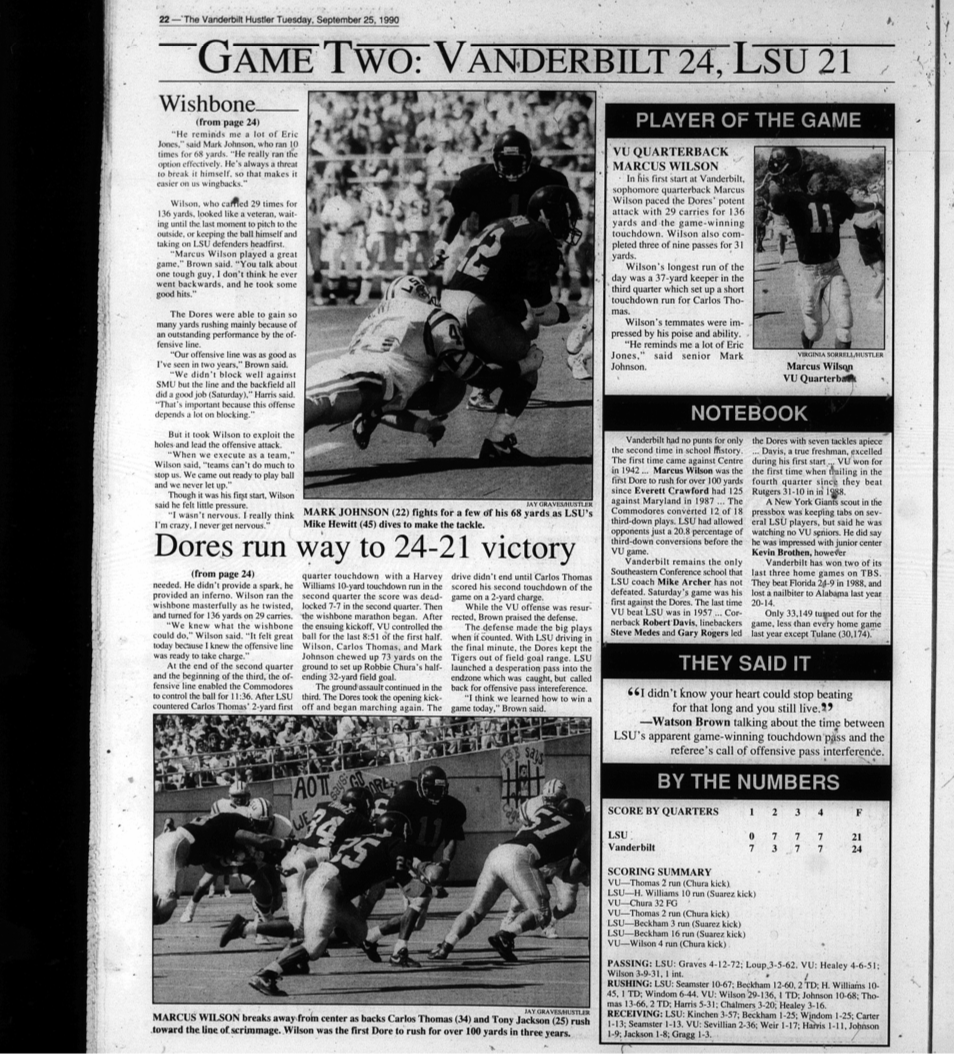 “I remember it clearly. Even though we got bailed out, that was the most validating win we could’ve earned. We thought we were legit again,” Thomas couldn’t hold back laughter. “And then, well, the next game was Alabama. And we found a way to go right back to our ways. If I remember correctly, we went into the locker room at halftime trailing 52-7. And then guess what? Déjà vu all over again. We didn’t win a game for the rest of the season, and we finished out the year 1-10 for the second year in a row. You can imagine how hard it is to be on that team. You can probably imagine how hard it is to lose that many times. But let me tell you, that upset sure was fun while it lasted.”

If this story has any underlying message, it’s never to count out the Vanderbilt Commodores. If this team — this program — could upset LSU en-route to their third 1-10 season in just five years, what’s stopping the 2019 Vanderbilt team from pulling off the improbable?

One Response to “Battle with the Bayou: Revisiting Vanderbilt’s last win over LSU in 1990”