Thousands of Tennessee residents gathered Sept. 7 at Memorial Park in Hendersonville to learn about pollinators, talk with beekeepers and buy locally grown honey. 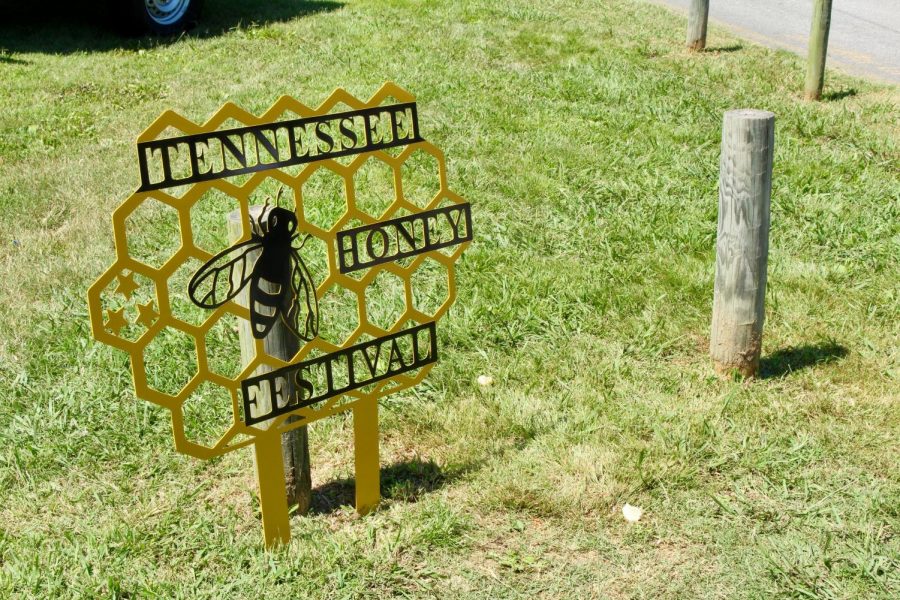 Memorial Park in Hendersonville, Tenn. gets its fair share of bees on any given day, but on Saturday, Sept. 7, the number of small, yellow-striped visitors skyrocketed. The second annual Tennessee Honey Festival, hosted by U.S. Pest Protection, drew in hundreds of the insects – and members of the Middle Tennessee community – from 10 a.m. to 5 p.m.

Last year, the first ever iteration of the festival was a huge success, drawing in more than 10 thousand visitors and dozens of local beekeepers to buy and sell honey, honey-based products and bee-themed clothing and jewelry. This year, there were more than double the tents for participating vendors.

The Mobile Bee Yard was a new and exciting addition this year; visitors explored a small trailer with mesh walls designed to house a few hundred bees and one beekeeper. Children and adults alike lined up outside the trailer, waiting for the opportunity to play with the bees, made possible by a set of gloves affixed into the wall of the trailer that reached inside. The festival also featured a main-stage with hourly performances from local musical artists, an education tent with hourly presentations, food tents, food trucks and an arts and crafts tent for children. 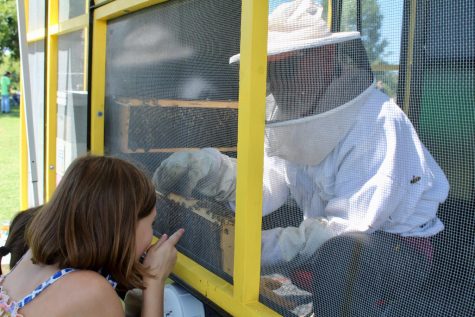 Honey festival attendees interact with honeybees in the Mobile Bee Yard, new to the festival this year. Demonstrations took place every hour, and beekeepers entertained long lines of children and adults alike.

Karen Bess, owner of Honey Child Jellies, was just one of many local vendors who set up shop at the festival to sell her specialty jellies, sweetened only with locally grown honey instead of processed sugars. Three and a half years ago, she quit being a pastry chef to start her business, and loves how she gets to meet so many people through festivals such as this one.

“My favorite part of any festival is meeting all the different people that come in. This is a honey festival, and I only sweeten my jellies with local honey. Why wouldn’t I be here?” Bess said.

Other attendees included Ralph and Gail Allen of Allen’s Apiary, local beekeepers who came to the festival because they simply didn’t know what else to do with all of their honey.

“We don’t know why we keep bees. We’ve done it for 10 years. If you have bees, it just kind of happens that you get more. We have 19 colonies now, and you’ve got to do something with the honey, so we sell it. We just enjoy the bees, simple as that,” Allen said. 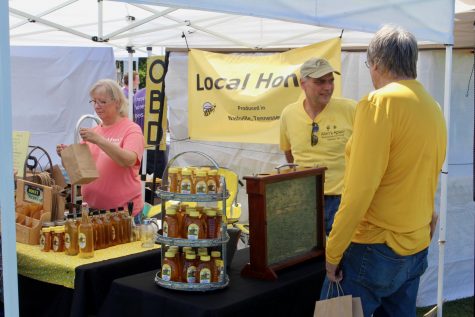 Allen’s Apiary was just one of many local honey vendors who set up shop at the festival. Ralph and Gail Allen, owners of the apiary, maintain 19 bee colonies back at their farm.

Interestingly, the Allens know most of the other beekeepers selling honey, noting that “beekeepers are a pretty tight-knit group.”

These relationships are facilitated by the networks opened by the Tennessee Beekeepers Association (TBA), who also ran a booth at the festival. Barry Richards, president of the association, spoke of the many smaller chapters that come together under the state-level umbrella organization at events such as the honey festival. While the Nashville Area chapter has been around since 1952, the TBA was formed in the late 90s to help connect beekeepers from those various smaller chapters.

TBA currently has more than 1,600 members active statewide, and is always looking to expand.

“What’s really been interesting in the last 5 years or so, is that there’s so much renewed interest in bees, and I think this honey festival is an example of that,” Richards said. “I think it’s because people are realizing that you don’t have to be a farmer to keep bees. We have bees in downtown Nashville on the roof of the Music City Center. It’s something that just about anybody can do all across the state, whether you’re out in the country or not.”

Richards also noted that the cool, casual vibe of the festival helped contribute greatly to the community feel of the event, which at its heart aims to educate, but on a personal level.

“You can go to the store and look for a tag that says ‘local honey,’ but when you can meet that beekeeper and ask them questions about their bees and what’s important to them, that goes a long way,” Richards said.

Nonetheless, TBA would not be involved at all if not for the efforts of the festival’s host, U.S. Pest Protection. The company, which operates in Tennessee, Kentucky and Alabama, aims to help people “bee aware” of pesticide use, according to Joshua Lefan, the spokesperson at the festival. Lefan explained that bees have had a high death rate in recent years, and he wants people to recognize the severity of the issue.

“Without bees, there are no human beings,” Lefan said.

As college students living on campus, it might seem silly to even consider starting a bee colony. But Richards wants students to know that it’s just as easy and beneficial to get involved in other ways. Vanderbilt University once had a beekeeping club, and some faculty members maintain colonies in Centennial Park (ever wonder what’s inside those white boxes on the island in Lake Watauga?) He noted that local beekeepers could always use an extra set of hands on the weekends, so there are always opportunities to help out. 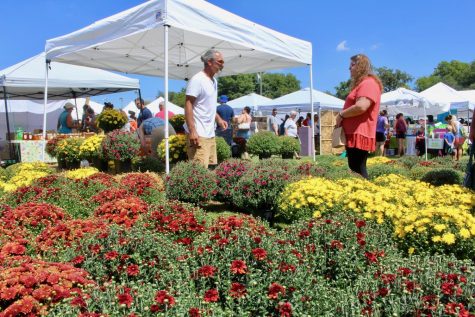 One specialty booth at the honey festival sold pollinator-friendly flowers in small pots that made it easy to transplant them. This booth, among others, ensured that the festival would be highly attended by the guests of honor: honeybees.

“There’s so much interest in honeybees and the importance of pollinators that people are interested in coming out and learning about them, talking to us and buying local honey because they recognize the importance of that,” Richards said. “This interest is going to fuel the research that’s required to face the challenges the future holds. We want to fuel that.”