STAFF EDITORIAL: Bill Lee is beginning to understand the wrongs of revering Confederate symbolism – he must continue his and Tennessee’s progress in understanding racial injustice 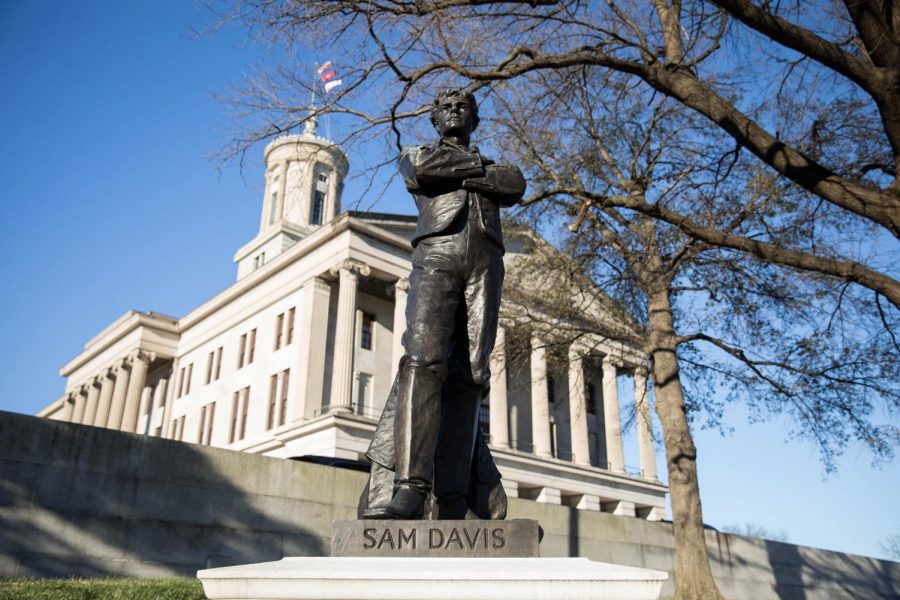 A statue of Sam Davis, the so-called "Boy Hero of the Confederacy", stands in front of the Tennessee State Capitol. Photo by Emily Gonçalves // The Vanderbilt Hustler

Governor Bill Lee is unsure about his participation in the reverence of racist symbolism in Tennessee. But he is walking in the right direction.

On July 12, he signed a proclamation to designate July 13 as “Nathan Bedford Forrest Day.” Forrest was a lieutenant general for the Confederate Army during the Civil War and served as the first leader of the Ku Klux Klan. Lee signed a document which casts Forrest in a positive light, describing him as “a recognized military figure in American history and a native Tennessean.”

However, just three days later and after extensive public outrage, Lee shared on Twitter a change in his stance: “While it is my job as governor to enforce the law, I want Tennesseans to know where my heart is on this issue. Our state’s history is rich, complex and in some cases painful. With this in mind, I will be working to change this law.” And he didn’t stop there. Firmly planting himself in his new position, he added, ”I want to share my heart about this. I didn’t like it, and I want to explain why I didn’t like it and why I didn’t want to sign it. There are parts of our history that are painful particularly to African Americans.”

Governor Lee’s decision to work with lawmakers in altering the statute should be lauded, as should his awareness of racial injustice in Tennessee’s history. But this positive step does not negate the racist issues that this controversy and others like it bring to light.

For instance, there is the issue of the bust of Nathan Bedford Forrest that remains prominently in the Tennessee State Capitol. Two years ago, Lee’s predecessor, Bill Haslam, called for the removal of the bust. Earlier this year, Lee took a political step backward, only conceding the possibility of providing more historical context for the bust. And amid his recent maneuvering about Nathan Bedford Forrest Day, he has further muddied his position about the bust, merely saying that a conversation needs to be had about the issue. Lt. Governor Randy McNally has even offered deference to a secondary commission to make the decision about the bust. Tennessee’s executives seem to be open to addressing the issue, but they’re still figuring out which position they can take.
Bill Lee has the opportunity to make Tennessee a leader in righting these wrongs, and his recent reversal shows signs he’s taking steps toward this correction.
Unfortunately, Lee is only the latest Tennessee governor to operate under government-sponsored idolatry of white supremacy – Haslam issued the same “Forrest Day” proclamation during his tenure, as did the seven governors who came before him. A Tennessee state law, enacted in 1969, requires the governor to designate six days of special observance each year. Three of these – Confederate Decoration Day, Nathan Bedford Forrest Day and Robert E. Lee Day – are celebrations of unequivocally anti-Black figures. Before this, those noxious figures and symbols were celebrated with official legal holidays.

Tennessee isn’t alone in holding onto these vindications of racial oppression. Across the South, many states still require the observation of Confederate memorial days or days honoring Robert E. Lee or Jefferson Davis (in an attempt at comforting racists, Alabama and Mississippi even mandate that Martin Luther King Jr. share a holiday with Robert E. Lee, as though the two are equally deserving.) Bill Lee has the opportunity to make Tennessee a leader in righting these wrongs, and his recent reversal shows signs he’s taking steps toward this correction.

Still, Tennessee has 70 Confederate monuments. Nashville has several of its own. Our own university housed some of its first-year students in “Confederate Memorial Hall,” a Commons dorm building that was only recently renamed after maintaining its moniker for more than 80 years. Vanderbilt has multiple academic buildings named after supporters of the institution of slavery, including Calhoun and Garland Halls, which are both named after slave owners, and McTyeire Hall, which commemorates a pro-slavery essayist. Inaction on behalf of Tennessee’s, Nashville’s and Vanderbilt’s leaders is an indication of the lack of priority given to their Black constituents.
we can start to grapple with the reality of white supremacy’s place within our history and our culture.
Many have tried to take matters into their own hands. Vanderbilt students have petitioned and hosted learning sessions about the Confederate legacy on campus. After protesting the Forrest bust at the state capitol, activists Justin Jones and Jeneisha Harris earned themselves bans from the hilltop. Earlier this summer, someone painted “THEY WERE RACISTS” on the Centennial Park Confederate monument. A hideous Forrest statue off I-65 still wears the bright pink paint applied in protest in 2017. These Tennesseans are tired of our shared public spaces being used to commemorate racists. If Lee maintains his ambiguous stance on the issue of celebrating oppression and fails to follow through on his new promises, he will be telling these activists that he does not care.

Our governor’s ambivalence is reflective of the historical moment. We’re at an inflection point in our collective attempt to deal with racism’s place within our history. We can pretend that anti-Black oppression doesn’t matter and accept those voices that demand that racists should be revered alongside MLK. Or, we can start to grapple with the reality of white supremacy’s place within our history and our culture. And we can start by cancelling Confederate holidays, throwing out the busts of slaveholders and rechristening buildings like Calhoun for people like John Lewis and Perry Wallace.