The Commodores will play for a National Championship against Michigan beginning on Monday night. 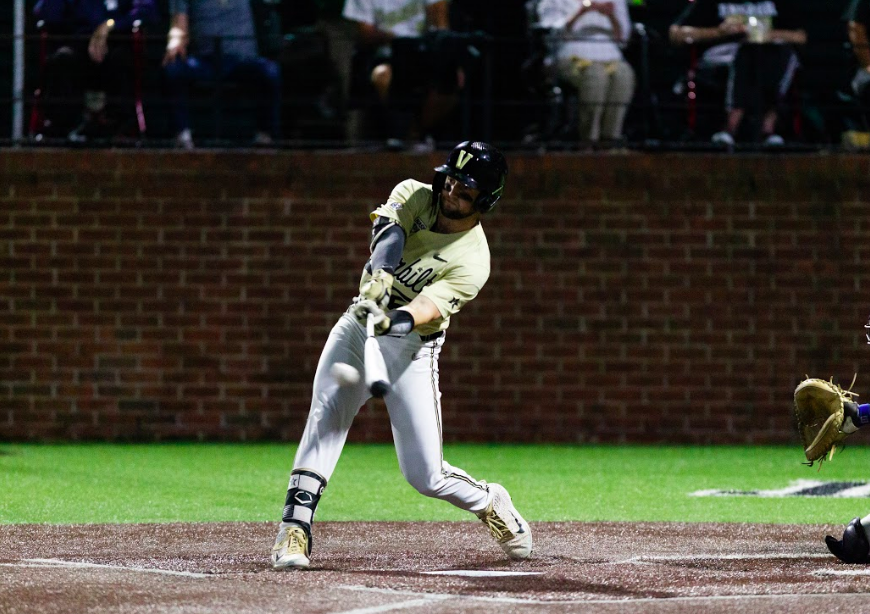 Last year, in the bottom of the ninth, in a winner-take-all Super Regional against Mississippi State, Vanderbilt needed a comeback.

They got it from two guys – Pat DeMarco and Ethan Paul – whose home runs sent shockwaves through the college baseball world. That wasn’t enough to make it to Omaha, though.

One year later, in Omaha, in the top of the ninth inning, those two came through again, and they’ve just propelled the Commodores into the College World Series Finals, defeating the Louisville Cardinals by a score of 3-2.

After losing the lead in the seventh inning, Vanderbilt looked headed for a Saturday night rematch. It was a heartbreaking blow for the Commodores, who watched the ball trickle into the outfield and watched the Cardinals celebrate their newfound lead.

Instead, Paul saved the day in the ninth, lacing a double down the right field line, scoring JJ Bleday from first and causing an eruption in TD Ameritrade Ballpark. Just two batters later, it was DeMarco’s turn. The Staten Island native smacked a ground ball down the third base line to score Paul and give the Commodores the improbable comeback.

“This team is special because no one really cares who steps up and gets that big hit or that big play,” said Paul. “I mean, I can say honestly I think that this team just wants to compete and play all nine. We knew we had to play a complete game to beat those guys tonight, and some guys stepped up when we needed them.”

It was the dream ending in what has been a dream season thus far for Tim Corbin and his team. Now, they’ll get a chance to take home the College World Series title against the Michigan Wolverines starting on Monday night.

His double down the third base line scores Paul to give the VandyBoys the lead again!#VandyBoys 3 – Louisville 2 pic.twitter.com/JdzcZu1vSx

While the offense came through late, Vanderbilt won this game with pitching.

Starter Mason Hickman was masterful. He didn’t get as many swing-and-misses as usual, but he baffled the Cardinals offense, inducing ground balls and pop flies with ease. It was classic Hickman — nothing flashy, but excellent command of his stuff and just not trying to do too much. He finished the night hurling six shutout innings, giving up just two hits, walking two, and striking out three, lowering his ERA to 2.08 in the process.

“Mason did everything that he could just to keep us in the game, and he did,” said Corbin. He left with a zero on the scoreboard, so he gave us a chance to win. And he’s been very consistent, too.”

It was the latest in a string of solid starts from Hickman, who emerged from a midweek role early in the season to claim the Sunday spot in the rotation from Vanderbilt all-time wins leader Patrick Raby. Tonight, he proved once again that he belongs there.

Hickman did allow a couple baserunners early on Friday night. The 6’6 right-hander drilled Alex Binelas in the hand with a fastball in the first, then allowed two baserunners to reach with two away in the second. Both times, however, he recovered quickly, silencing the Louisville bats. He carried that momentum into the next couple innings, retiring one Cardinal after another (albeit throwing a lot of pitches in the process).

Opposite Hickman, Luke Smith certainly did his part. The Illinois native hurled 8.1 innings, allowing just four hits while striking out ten. The Commodore bats simply had no answer for him until that fateful ninth inning.

At one point, Smith got so fired up from his dominance, he began yelling expletives at the Commodore dugout.

Vanderbilt did manage to strike first in the top of the third. Harrison Ray drew a leadoff walk and Ty Duvall promptly singled on the very next pitch to advance him to third. Ray came around to score when Infante grounded into a 6-4-3 double play.

It would be a while before the offense would show up again.

After the two sides traded scoreless frames in the middle innings, Jake Eder came on to relieve Hickman in the bottom of the seventh, and that was apparently what Louisville had been waiting for. Danny Oriente doubled to right-center field on Eder’s very first pitch, and advanced to third on Drew Campbell’s sacrifice bunt.

Justin Lavey came up next for the Cardinals and struck a hard-hit ground ball to short that would have gotten the run home, but Tim Corbin had the infield in, and Ethan Paul fired home to cut down pinch-runner Trey Leonard at the plate.

“We train that so much back at Vandy,” said Paul. “I just didn’t want to rush the play, just trust myself and make a good throw. In those moments you try not to do too much and you just don’t panic and you just make a good play.”

Louisville didn’t stop there though. Henry Davis singled to second to give the Cardinals runners on first and second with two out, and an errant throw to third from Ty Duvall on a double steal attempt allowed them to tie the game. They’d take the lead on the very next batter, as Lucas Dunn smacked a single off Eder’s glove that trickled into left to score the go-ahead run. The momentum had completely shifted, and the Cardinals looked headed for a rematch Saturday night.

That rematch will never come.

After a strong eighth inning, Smith came back out to try to finish off the complete game. He looked like he might do it, inducing a groundout to start the frame. Then, the Commodore offense struck gold.

After Bleday’s walk, Paul doubled down the right field line to tie the game. Clarke followed up with a single, and DeMarco smacked a chopper just fair down the third base line to give Vanderbilt the lead in the top of the ninth. Just like that, the script had flipped.

“I knew that [Smith] was close to his end, so I just wanted to get a pitch that I could handle,” said Paul of the at-bat. “I got a heater pretty center cut and just put a good barrel on it.”

Tyler Brown came on in the ninth, and after a ground ball off the bat of Drew Campbell clipped the first base bag putting a runner in scoring position, Brown did what he does best.

He shut the door.

“He contains his emotions unlike anyone I’ve ever seen before,” said Corbin of his closer. “Those saves, I understand what the statistic save means, but his saves are critical. If you go back and look at the nature of each one of those, his ability to focus and his ability to execute and his ability to stay in his lane and not get outside of himself is admirable. That’s a wrestler, that’s a dad, that’s a — he’s still a sophomore in college.”

Vanderbilt has a chance to win its second National Championship under Tim Corbin next week, and the first since his team did it just five years ago in 2014.

When Monday comes, they’ll be ready.