A five-star recruit with all the tools in the world combined with an up-and-down freshman season makes Simi Shittu one of the more unique prospects in this NBA Draft. 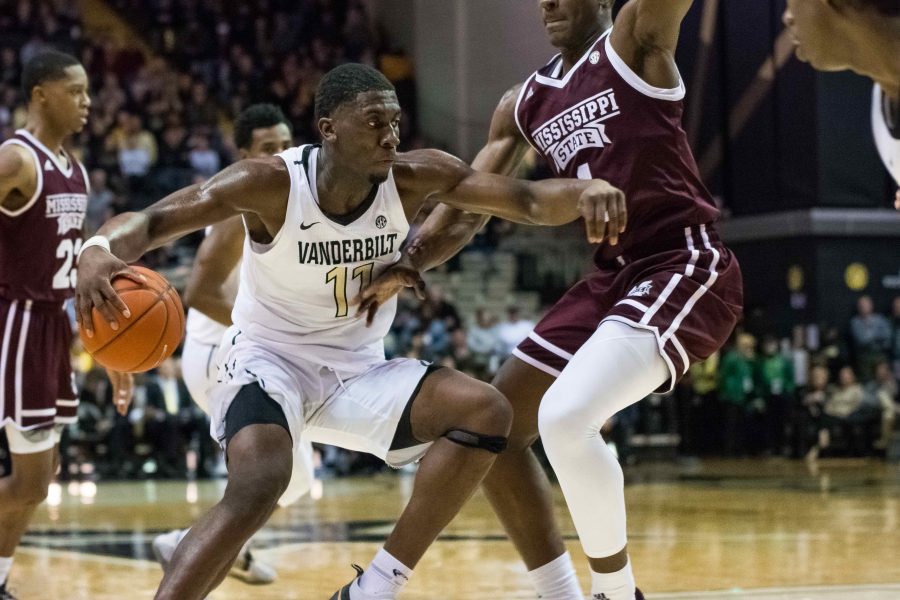 It was over a year and a half ago that 5-star recruit Simi Shittu announced that he was committing to Vanderbilt. The then consensus top-10 recruit ignored all the blue-blood programs chasing him and chose Vandy, completing the school’s greatest incoming freshmen class ever and adding to the excitement after Darius Garland had committed a few days prior.

Those who follow the Commodores know that the season did not go as planned from there. A few weeks after the team completed one of the most disappointing seasons in school history, Shittu declared for the NBA draft.

As the Vanderbilt big man prepares to hear his name called on draft night, here’s his draft profile.

While teammate Darius Garland did not participate in the better part of the NBA combine, Shittu did. He was measured, he competed in drills, and he played in the 5-on-5’s, giving teams a better idea of his size and skillset.

When measuring with shoes, Shittu was listed as the 7th tallest forward at the combine. One of Vanderbilt’s bigs this past season, Shittu compares well with big men from his class and those in the NBA. While the forward position is currently extremely diverse in terms of size and playing style, Shittu represents an overall in between. He could also easily fit into the “small-ball” center role of a team.

Shittu was middle-of-the-pack in terms of weight when compared to fellow combine prospects. While being lighter helped his quickness and vertical jump during the season, he was frequently outmuscled by heavier forwards and centers. Shittu could look to get stronger without losing his speed or leaping ability.

Among forwards at the combine, Shittu had the 9th longest wingspan. With the NBA obsessing over finding players with length, this puts him in a solid position. Even though he was not a rim protector at Vanderbilt, his wingspan will give teams hope that they can mold him into one when playing at the five.

When Shittu picked Vanderbilt, he became the school’s highest recruit ever in basketball. This was huge for a school that has had solid teams and recruits in the past, but had never been able to truly compete with college basketball’s elite in the recruiting game. Vanderbilt basketball had only one prior 5-star recruit in its history (John Jenkins), until Darius Garland committed. Garland’s signing gave fans hope that the school could recruit the game’s best, and Shittu cemented this belief when he also committed just a few days later. Shittu helped raise the team’s profile immediately, and with his commitment, expectations in Memorial also rose.

Once Shittu took to the court, he was just as impactful as he was off of it. Despite having torn his ACL in December and having missed most of his senior season, Shittu was ready for the season and played every game. On offense, Shittu was one of the team’s best scorers, consistently displaying his driving and rim-running ability, which frequently led to easy buckets for the big man. Besides scoring, he was also one of the best passers on the team and he led the Commodores in offensive rebounds. However, as the season transitioned from non-conference play into conference-play, Shittu underwent a noticeable dropoff in production. Chalk that up to a changed lineup in the wake of the Garland injury, or more formidable opposing big men, but it’s that dropoff that caused his stock to fall.

What Sets Him Apart

Most draft experts and analysts have Simi Shittu going very late in the second round or not being drafted at all. This sets Shittu up to possibly being one the draft’s steals.

Shittu’s passing is elite for a player his size, and it is arguably his best skill. Big men who can pass like guards are a rarity in the NBA, and Shittu has the potential to develop into one. His assist numbers may seem low, but they do not accurately represent his passing ability. Coach Bryce Drew consistently praised Shittu for doing a “great job of finding guys” and getting them “really, really good looks” with his passes. After Garland’s injury, the team suffered shooting and spacing issues which certainly thwarted many opportunities for Shittu to truly display his passing ability. A better offensive scheme and personnel in the NBA will likely allow the big man to exhibit his passing.

Shittu is also better at handling the ball than most bigs in his class. He would frequently start fast breaks after grabbing rebounds, usually finding the open man cutting to the basket. On a set half-court offense, Shittu flashed the athleticism and ball handling to attack and drive by big men off the dribble. If he can develop into a more consistent ball handler and passer on drives, he will boast an extremely valuable skill in the league.

Another skill Shittu possesses is the ability to effectively be the big man in the pick and roll. Even though Vanderbilt’s system did not ask him to frequently set a pick for the ballhandler, the few times it did, especially with Darius Garland at PG, Shittu shined. Besides setting solid screens that created separation for whoever had the ball, he was also a skillful finisher. This capability was better seen at the combine where Shittu’s pick-setting stood out. If he develops an outside jump shot, he would become even more dangerous as it would open a multitude of possibilities for him on offense with the pick-and-pop.

Whichever team drafts or signs Simi Shittu will acquire a “very unique player”, as Drew has called him, with the potential to have combination of offensive skills that few big men in the league currently have.

SHITTU FROM RYAN FOR THE JAM! THROW IT DOWN SIMI! pic.twitter.com/DUJEhomU6Z

Simi Shittu has untapped potential in his game, but he also has holes that he will need to fix in order to earn playing time.

While Shittu knows how to score off drives and cuts, he struggled with his post scoring and outside shooting. He has a quick spin move on the low post, but against better NBA defenders Shittu will need to learn more moves and score more efficiently. Even though the league has mostly drifted away from post ups, it is still a skill every big man should have as it can be very useful when the play or set has broken down.

Even for forwards and centers, the importance of being able to shoot threes has grown exponentially the past few years. Shittu understands this, but unfortunately, he hit only 1 of the 18 three pointers he shot. Drew even said that the team was hoping he would be able to “step out on the perimeter and knock some shots down”, but that never happened and it hurt the Commodores. More practice and emphasis on the 3 point shot will certainly help him improve, but he will also likely have to adjust his mechanics as his shooting motion is subpar.

Shittu’s biggest area for improvement is his defense. When directly guarding big men, he was frequently outmuscled in the paint. Shittu will undoubtedly need to hit the weight room and become stronger to hold his own in the post. At Vanderbilt, he was not consistently used to protect the rim, but he will have to when playing small-ball center in the league. Fortunately for him, he has the length and vertical leap to do it, but a team will need to develop him.

Being able to guard and switch onto smaller, quicker players will be one of Shittu’s most important challenges. Considering he struggled to do that in college, NBA teams will try to exploit this weakness and Shittu will need to improve to stay on the floor. Becoming more agile and boosting his lateral quickness (he was in the bottom half of all measurements at the combine) will be huge for him.

Considering Simi Shittu’s interesting and diverse set of skills and areas for improvement, there isn’t a perfect comparison in the NBA. There are a variety of ways Shittu can play in the league, but one player he could have a similar career to is Dwight Powell. While Powell is not a superstar, he is someone who has found a niche in the NBA and has established a path that Shittu can follow with hopes of having a lengthy career.

Physically, Powell and Shittu are very similar. Powell is only 1.5 inches taller and a few pounds lighter, but he has a shorter wingspan. His college numbers are also extremely close to Shittu’s as he averaged 10.8ppg, 6.3rpg, and 1.8apg, on 46.4% shooting from the field while at Stanford.

In terms of playing style, Powell has become a fan favorite in Dallas due to his high-energy and unselfish play. He knows he does not get all the attention or praise, but he always focuses on doing his job of setting hard picks, helping on defense, and playing with energy, and he is now in line to receive an extension from the Mavericks.

Shittu has the size, athleticism, and ability to do all these things. If he can develop a selfless mentality similar to Powell’s, especially with his passing ability, he will definitely have a role in the NBA. Hopefully Shittu can find the perfect position for him in the league and stick to it for many years.

There is little information available as to who Simi Shittu has met and worked out with. According to multiple sources, Shittu has participated in a pre-draft workout for five different teams. These teams are the:

The Toronto Raptors just won the NBA championship, but they might have a very different roster come next season due to several expiring contracts and the team being over the salary cap. While the defending champions usually do not have much space to improve, one thing their roster does need is big men. The Raptors are full of versatile forwards but they only used two true big men on their championship run – Marc Gasol (who could opt out) and Serge Ibaka. Drafting Shittu would add another big man to the roster, especially one who can pass and be used in the high post in Nick Nurse’s offense. This would also be a homecoming for Shittu, who grew up in Burlington, Ontario near Toronto.