The Vanderbilt Hustler • May 2, 2019 • https://vanderbilthustler.com/23812/featured/vanderbilt-soccer-stars-getting-attention-at-national-team-camps/ 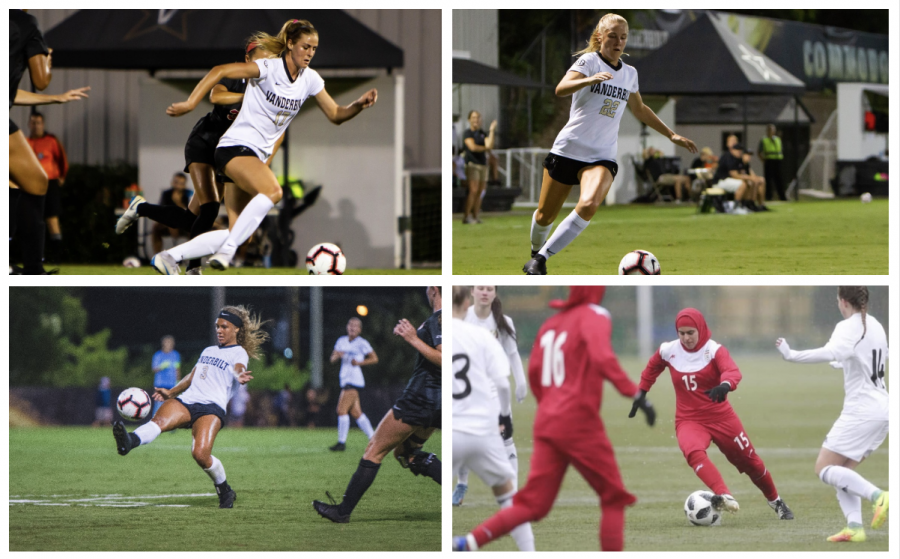 Vanderbilt Soccer had a historic t0 2018 season, and some of the players that helped make that history in 2018 are getting recognized at the international level.

This spring, four different Commodores received call-ups to national team camps. Forward Haley Hopkins and center back Ella Shamburger got tapped for two different United States U23 National Team camps, early enrollee Kimya Raietparvar has earned two call-ups to the Iranian U19 National Team, and winger Madiya Harriott has been called up to multiple camps with the Jamaican Senior National Team, known as the “Reggae Girlz.”

Head Coach Darren Ambrose is thrilled to see that many Vanderbilt players get recognition on such a big stage.

“I think any time you’re asked to represent your country, I don’t care if it’s in soccer, basketball, I don’t care if it’s knitting, it doesn’t matter,” Ambrose said. “There’s a tremendous honor that goes with that that’s far beyond anything else. I think the girls realize that. For us, it’s nice to see the Vanderbilt name next to a kid on a roster for the national team. I think it shows that our program is capable of developing players when they come in, taking girls that have had a little experience like Ella, and continuing on that development track that they are clearly able to go back into camps and progress through that system. I think it just shows that the level of our program continues to grow and our expectations of our players coming in and those we recruit are high.”

Harriott will participate in Jamaica’s camp from May 12-19 as the team narrows down its roster for the Women’s World Cup taking place in France this summer. The Reggae Girlz will take on Panama in a World Cup tune-up at the end of the camp on May 19 at the National Stadium in Kingston, Jamaica. The final 23-player roster for the World Cup is expected to be released following that camp.

The environment in the camp as the World Cup approaches is extremely tense, but according to Harriott, that’s exactly the environment she wants.

Hopkins played for the U.S. U23 National Team at a tournament in Portland, Oregon that featured some of the top National Women’s Soccer League sides, including the Portland Thorns featuring Vanderbilt alum Simone Charley. The two got to link up while in Portland, and they lined up against each other for the final minutes of the U.S.’ 1-0 win over Portland.

Just a couple of weeks later, Shamburger got called up to a completely new U23 roster for the La Manga Tournament in Spain featuring some of the best U23 teams in the world. She earned the start in the team’s final match of the tournament.

The U-23 #USWNT dropped a hard-fought 2-0 result to 🇮🇹 in its third and final match at the La Manga Tournament. pic.twitter.com/M3l3wF77G1

“It was really surreal to me because my parents are both from Iran,” she said. “So it felt good to represent them and truly show what Iran is and just make everyone in my family proud.”

Having that many players getting recognized is a sign that Ambrose’s program is on the rise and heading in the right direction, and the program is preparing to add more players with international experience to the mix. Two other 2019 recruits, Maya Antoine and Sophie Guilmette, have experience in the Canada National Team system.

“It’s just such a great representation of Vanderbilt Soccer and having so many players like Madiya, Kimya and Ella being able to have the chance to represent their respective countries on the international level,” Hopkins said. “It’s kind of just a great depiction of how our season went.”

From a player development standpoint, having international experience is invaluable. Ambrose said the experience of getting to play on an international stage helps players elevate their games and bring a completely new mindset to the Commodore program.

“I think it’s happened with Madiya Harriott,” Ambrose said. “Again, you see that she comes back and they see the bar is higher. When they’re in our program and clearly they have an impact and they play, they’re successful. Then all of a sudden, they go and they see there’s a whole other level that they have yet to attain. We hope the goal and expectation is that they come back with a really laser focus on the things they have to do to be successful. They’re only at Vanderbilt now, but to make a national team, to go play in a World Cup, to go play in Spain, to go play at the pro level, there’s another level. I think it reinforces the things that we have spoken with them about, they’ve identified as areas that we’re trying to work with them on and things they need to do.”

For Harriott, who still has a chance to represent Jamaica in the country’s first-ever World Cup, just having experience with a senior team is an incredible experience for a rising junior. Even if she doesn’t make it to France this summer, Ambrose is certain she has a bright future for both college and country.

“She’s a sophomore,” he said. “She’s young. I’d be shocked if come World Cup time in four years’ time again if she’s not somebody that maybe makes it. Right now, it’s about the experience, it’s about seeing what that’s like, and I will tell you she went there and came back, she’s a different player. She has elevated her game in the things we’ve talked with her about in her passing decision, her first touch, all of those things have improved exponentially in the last three months. She’s really playing probably the top of her game right now. It’s a great honor to go in as a young player into that kind of environment. Even if it was never about making the final 23, it’s about being called back and now doing it in the fall and playing as well as you can and maybe getting a call back after that. Those women are going to get old and retire, and the next group coming in, Madiya Harriott I think has got the ability to be a part of that group.”