Dr. Jonathan Metzel was discussing his book, Dying of Whiteness, when a group of white nationalists overran the Politics and Prose Bookstore 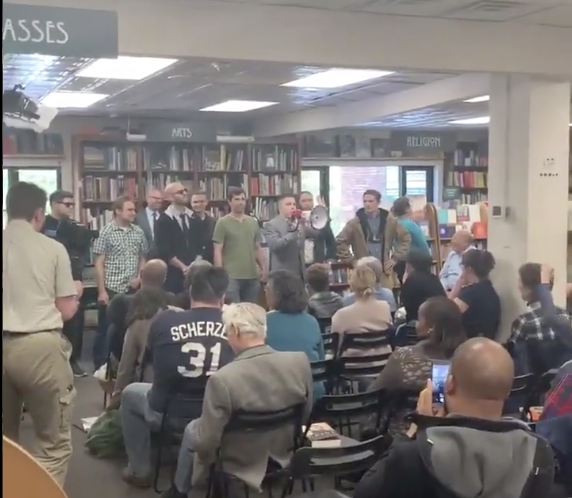 Dr. Jonathan Metzl’s book talk at Politics and Prose Bookstore was interrupted on Saturday when a group of white nationalists marched into the Washington D.C. shop and took over the talk, shouting “this land is our land.”

“It was scary for about a second because when people march in acting like they did, your first question, especially if you’re from Tennessee, is do they have guns, do they have weapons,” Metzl said.

The white nationalists, who called themselves “identitarians,” were not armed and demonstrated by yelling and chanting through a bullhorn. According to Metzl, no one was injured, and the chants were met by booing from the audience. The American Identity Movement, which is considered a hate group by the Southern Poverty Law Center and a white supremacist group by the Anti-Defamation League, took credit for the disruption on Twitter.

So this bullshit just went down today at Politics & Prose. White nationalists disrupting @JonathanMetzl talk on his book Dying of Whiteness. Point made. @PM_Learn pic.twitter.com/nucKlrJ8X2

Metzl, a professor and Director of the Center for Medicine, Health and Society at Vanderbilt, was engaging with an audience member who helped Metzl’s family escape the Nazis during the Holocaust, when the white nationalists entered the store, he said.

“My dad is a Holocaust survivor, he and my grandparents escaped Austria, and one of the men who helped my family escape was in the audience,” Metzl said. “So part of what I was doing in the talk is, I said, ‘here’s a vision of America that’s bold and generous and we can do so much better when we act confidently to provide safe haven for people.’ I was acknowledging this man who saved my family and at that moment, in come the Nazis.”

The white nationalists took issue with Metzl’s book, Dying of Whiteness, which explores how racial resentment in politics is hurting health outcomes for white Americans. Videos of the disruption on Twitter show the group’s racist and anti-immigrant rhetoric and claims that their nationalism could offer white Americans better healthcare and jobs.

After a few minutes of chanting, Metzl says the white nationalists left. Rather than return to what he was talking about, he asked the audience to take a few moments to process what they had just experienced. Audience members took turns coming to the microphone, where Metzl said many raised the question of what kind of country they wanted to live in. After talking through the event, Metzl finished his talk.

Politics and Prose co-owner Bradley Graham said this is not the first time a book talk has been interrupted by a demonstration. Just last month, protestors from the University of California system disrupted a book talk with former Secretary of Homeland Security Janet Napolitano at the bookstore. Graham said that the staff remained calm during Saturday’s events and were told that Washington D.C. law enforcement is investigating the situation.

In the day since the event, videos on Twitter have gone viral and Metzl has received an outpouring of support. He said he was heartened by the responses and thankful no one was injured. The interruption, he noted, was just hours after a shooting at a California synagogue, and it is necessary that white Americans speak out against white politics of racial resentment because the stakes are so high.

“There’s such a powerful community of people out there, Republicans and Democrats, who are just appalled by this,” Metzl said. “This isn’t about one party – this is about the future of our country.”