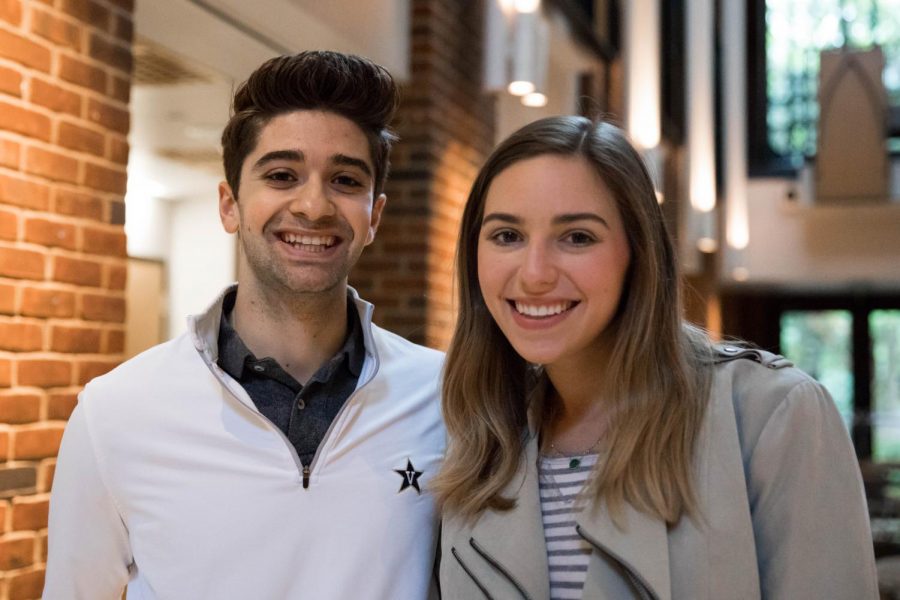 Vanderbilt Student Government (VSG) 2018-2019 President Tariq Issa and Vice President Lanier Langdale sat down with the Vanderbilt Hustler to discuss the accomplishments and challenges of their past year in VSG, as well as their hopes for the future.

Vanderbilt Hustler: Looking back on this year, what do you see as the milestones that have marked the year in VSG?

Tariq Issa: The people that we’ve met, the growth that we’ve have individually and personally and professionally– that’s probably been the coolest thing. I’ve met a lot of people that I wouldn’t have otherwise if I weren’t in my role: administrators, students in general. […] In terms of initiatives, some of my favorite things have been the student leadership award that we established this year– that was on our platform; that was probably one of my favorite things –and working on the student center proposal that the Hustler covered this week.

Lanier Langdale: I think when we got to the point when we were walking into meetings and not just in full panic mode anymore, but actually having a full understanding of “Okay, this university has a lot going on.” Future VU is massive, but there’s all these projects, and we’re involved every step of the way. We know what’s going on. We’ve joked we’ll come back for Homecoming and know exactly what’s going on because everything will be just as we planned with the construction. Just getting a full grip on that and how the university functions– that’s when we started to see a lot of our initiatives pick up speed because you just have understanding of what we’re working with.

VH: Looking back on your campaign platform, what are things you have achieved and what do you wish you could have spent more time with this year?

LL: I think [the VSG] website is one thing we really wish we had been able to spend more time with. As with any student organization, you’re dependent upon the people in the organizations, and people go abroad and plans change and stuff happens and it’s no one’s fault. That was one thing that we were really passionate about.

TI: We campaigned on the fact that we had ideas and plans for how we were going to carry them out. And we’ve been able to do 80 percent of it, and then set the groundwork for two of the other points. It was only two other points that we didn’t get to this year: the task force for student advocacy, because it was just difficult to do with midterms, and our director of Active Citizenship and Service really had a lot on her plate and did a great job with everything but that kind of fell through. And then the other one was, we didn’t get a lot of work done on our academic mentoring before students got here– just because our academic affairs committee was doing great work elsewhere and we felt like we didn’t need to say, “This was our platform; do this.” If you’re doing a lot of great work, it’s not about one point anymore, it’s about what the overall goal and vision of VSG is. […] You enter the role, and you’re like, “Okay, I have these twenty points that I have to get done because this is what I campaigned on.” And then you’re micromanaging because you want to get those twenty points done, and you realize that there are 160 other members in the org. If they’re doing 160 other things that are all fitting into the mission, that’s a lot more than twenty points. I think we got a lot more done once we let go of the platform, and then, with that, a lot of the platform did get done because people came up with those similar ideas because those are still campus issues.

VH: What has been the most challenging thing for each of you about your role?

LL: I would say people management has been the most difficult thing. It’s something I feel like is really hard to prepare yourself for. As a student, we don’t get the chance to manage other people in this way very often, so that was a very new skill that you just have to jump into headfirst and try different methods to see what works. I think that was the most surprising thing for me, but obviously the most useful skill that I gained also. That’s just absolutely invaluable.

TI: Another thing I found really challenging is balancing the two different timelines that exist at Vanderbilt. Students, we’re on a four year timescale, so we want change in the next week; otherwise, it’s too slow. An administrator is here for ten, twenty, thirty years, and they see exactly how far Vanderbilt has come. So we think that Vanderbilt hasn’t changed a lot in the past two years; it has. Construction is one fourth of our Vanderbilt experience; it’s a small fraction of the future of Vanderbilt. So how do you balance those timelines between the administrator and the student, between getting tangible work done now and for the future? Because Vanderbilt’s going to last a lot longer than we are. In four years, we’re going to look back and say, “Oh, that’s what all that work was done for. That’s worth it.”

VH: What are your hopes for next year’s VSG?

LL: I’d love for them to be able to hit the ground running a little better than we did. We’re really pouring ourselves into this turnover, trying to make sure it goes smoothly and that they’re prepared to take on these roles– although you can never be fully prepared. As hard as we try, stuff still takes you by surprise. I would love to see them really get some headway over the summer. I love Frances [Burton] and Veer [Shah]’s focus on sustainability and environmental impact. We’ll be really excited to see how that plays out. While it’s always been a priority for VSG, it’s such a huge passion of both of theirs. I think they’re going to do incredible things.

TI: One of my biggest passions– and I think of a few members of their administration, including Frances, Veer, Sean [Swinford], and Julianna [Hernandez] — is pre-professional prep and seeing how far we can go with that. There’s some retention of members of VSG who are working on it this year and continuing it next year. How can we support students who want to go to these professional schools, graduate schools, and make sure there’s an equitable opportunity for everyone? It doesn’t matter where you come from or the mentors you had growing up.

VH: Where will both of you be next year?

TI: I’ll be in medical school in Chicago.

LL: He’s going to Northwestern. He doesn’t like to talk about it. He’s going to do great and probably be involved in the student government there.

TI: I was at a Second Look weekend, visiting there, and they had an org fair. These first year med students were tabling, and I was like, I really don’t want to be one of these students tabling for an organization, but I feel like that’s going to be me next year.

VH: What last words or piece of advice would you want to leave with the student body?

LL: Vanderbilt can be a pretty intimidating place, especially when it comes to leadership positions. They’re extremely competitive here, and they can be really hard to get. I never imagined myself getting here. It was never my grand plan to be on an executive board of anything, let alone VSG. Everyone should have the confidence of knowing that their ideas, opinions, and experiences are all important and can be really impactful, even if you don’t think they are. So never be scared to speak up and go for those positions and voice those opinions. Because that’s what makes Vanderbilt the great place that it is.

TI: It’s even beyond positions. Some of the things that have rallied students the most this year haven’t been through student organizations. The Free Cyrus Wilson movement— a lot of students came in beyond their organizations because they thought, this is an idea I want to pursue. The 100% Renewable Movement— it was really exciting to see how many students came together to work on it. Yeah, SPEAR supported it, VSG supported it, other organizations came in to support and make sure it came to fruition, but those were the ideas, the brainchildren, of individual students who came in like, I have this idea I want to pursue it. So don’t be afraid to push your idea and talk to people, reach out, see who will support you. Because there’s a lot of people on this campus who share the same ideas as you and want to do the similar things. If you have a great idea, make sure you share it.