The lighter side of Vanderbilt Baseball 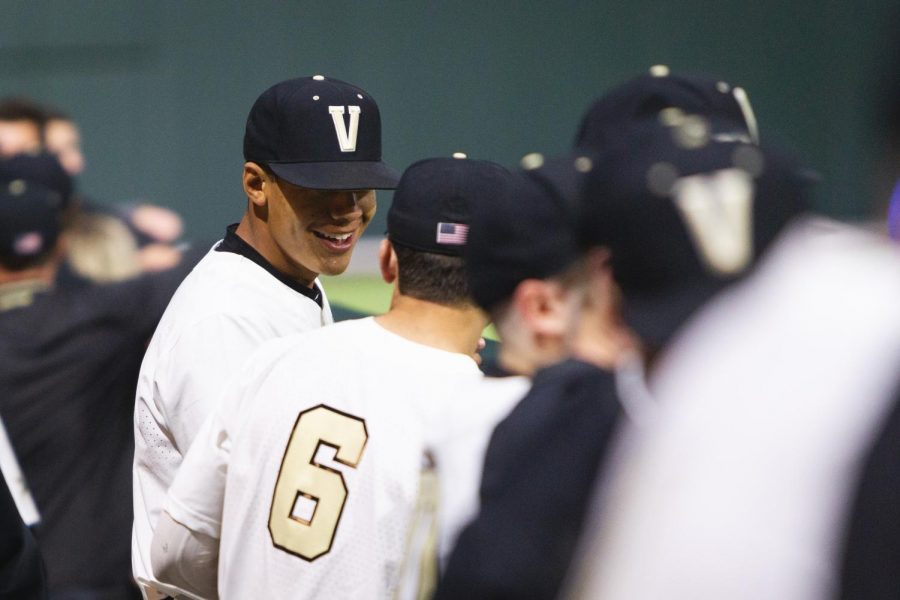 The side of Vanderbilt baseball that most fans see is serious and focused on the game, but when they’re all together and the spotlights of Hawkins Field are off, their true personalities shine.

We asked a few players about everything from their favorite place on campus to who they trust most to take the aux cord and play music during a workout.

Vanderbilt Hustler: Who has the best walk up song?

“I think JJ’s defines his personality the best. But, I like Austin’s. Austin brought his back from last year, which was a hit.” –Philip Clarke, sophomore catcher

“The best walk up song would probably be Austin Martin…I don’t know if anybody notices, but we all notice when he kind of shimmies with it and dances with it. So it’s pretty fun to watch, and it’s pretty funny to see him hit and also dance at the same time while he’s in the box. He’s having fun with it.” -Justyn-Henry Malloy, freshman infielder

“I like Austin’s Martin’s classic from last year. He has that little dance that he does with it. I love that. He’s got his little routine, so you can’t beat that.” – Julian Infante, senior infielder

VH: Who do you trust most on aux and why?

“I think Cooper [Davis]. I give him a hard time, but he has pretty good music. He’s the only one who really like it and always takes it.” -Clarke

“Cooper Davis. Cooper is usually the first guy to get his phone on the aux, and he plays some fire stuff.” -Malloy

VH: If you had to be on a deserted island with one teammate, who would you pick and why?

“Oh that’s tough. Probably Jack Goodrum. He’s our senior manager. He’s really good with outdoor stuff, and he’s really smart. I would say he’s the best in that situation and a really good friend of mine.” –Infante

“I would pick Julian Infante because he would know what to do on a deserted island. He’s a very mature guy and a very fun guy to be around. He’s the type of guy I would want to be around 24/7.” -Malloy

“Jake Eder. He’s really outdoorsy, so he’d know what to do.” -Clarke

VH: Who’s the worst dancer on the team?

“I’d say Harrison Ray, who thinks he can dance like Chris Brown. He said that in an interview recently, and that’s just absolutely not true, so I’m calling him out on it.” -Infante

VH: Who do you look up to most on the team?

“All of the seniors. They’re all awesome. To have that many seniors is amazing.” -Clarke

“Julian [Infante]. We play the same type of position. We’re corner guys. We’re kind of the same type of hitter with power. So we relate in many ways. With that, we kind of just grew close, and it’s a big brother-little brother thing.” -Malloy

VH: Who’s the funniest guy on the team?

“The funniest guy on the team would probably be John Malcolm. He’s a character in his own way. It’s really funny to see his antics and what he does. Everything about him is just funny. The biggest antic would probably be his voice. His voice is really unique, it’s really deep and raspy, so with that, it just kind of makes everybody laugh, and we enjoy his company all the time.” -Malloy

“I’m going to have to go with Austin Martin, who’s a roommate of mine.” -Infante

VH: Who’s the most serious guy on the team?

“The most serious guy on the team would be Ethan Paul. But at the same time, he’s really funny. When he’s between the lines, he’s really serious, but he’s still one of those guys that you always want to be around. You want to crack him and make him laugh because of how serious he is.” -Malloy

VH: What’s your favorite spot on campus besides Hawkins Field?

“I would definitely choose the Pub. The Pub is a place where we can decompress and relax and escape from baseball for a little while, whether it’s before we eat and get together as boys. We’re able to come over before heading to Hawkins, and then after, if we want to go over and eat at the Pub and use our meal swipe, we can do that, too.” -Malloy

“I like Rand. It’s really creepy, but I like the back of Rand by the old pizza place. I like to go right there and get in a little corner and just listen to music and do homework. That’s where I study. I like people-watching, and that’s the spot.” -Infante

“I go eat with Ethan Paul and JJ Bleday. Then, I come here and hit. Then, we do our team pregame and drink a smoothie and eat a peanut butter and jelly sandwich. Then I’m ready to go.” -Clarke

“First, I would go down into the cages. We have our hitting tools, so I get going with that first and get stretched out. Then, I’ll hit in the hitting cage with our hitting coach, Coach Baxter. Then after that, we get onto the field and do our thing. In between, with our downtime, I’ll listen to music and relax and decompress and get my mind right for the game.” -Malloy

“I like the standard black top and the white pants with the stripe.” -Infante