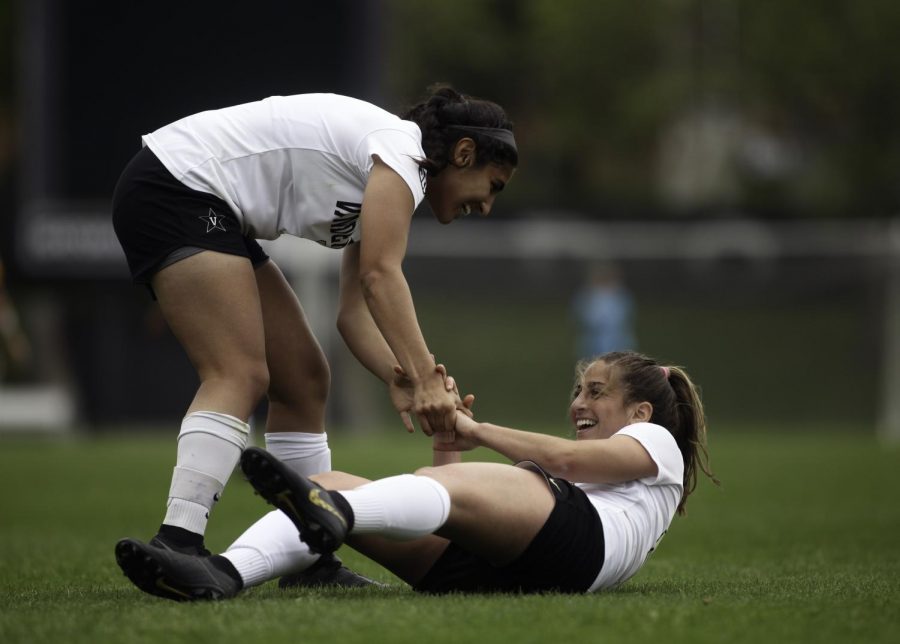 Following a historic 2018 season, Vanderbilt Soccer showed no signs of complacency as they routed Kennesaw State 4-0 in their final spring scrimmage.

Despite the dominant scoreline, Kennesaw State showed signs of pressing the Commodores early on. The Owls seemed to have scored the opening goal of the game on a header off of a free kick, but it was quickly called off due to the Kennesaw State scorer being offsides.

From that point on, the Vanderbilt defense shut the Owls out of the attacking third for the vast majority of the game.

“I think that it’s hard when we are playing teams that we don’t usually play because we don’t know how they play,” said midfielder Raegan Kelley.  “Once they get a chance like that, you have to say ‘Okay, they can score’ and everyone kicked into gear after that.”

The wake-up call seemed to resonate with the offense as well as the defense.

Kelley opened up the ensuing Commodores’ scoring frenzy with a one-touch goal off of a cross from Maddie Elwell late in the first half.

In the second half, forwards Kaylann Boyd and Haley Hopkins helped stretch the Commodores lead to 3-0, and Kelley capped off the match with a wondrous sequence of a touch, 180º spin and goal off the crossbar to punctuate the 4-0 victory.

Coming off of an already strong freshman season, Kelley’s furthering of her goal-scoring ability should be a source of excitement for the Commodores in the coming season.

“This spring, we’ve seen her [Kelley] take over games a little bit more,” said Coach Darren Ambrose. “Through practice and application of things we’ve talked to her about, she is clearly emerging as one of our stronger players.”

While the Vanderbilt attack’s ability to create opportunities garnered most of the game’s attention, the Commodores’ defense also smothered the Owls as they denied the Kennesaw State offense a single shot on goal in the second half.

“We were really quick to put some pressure on them and force them into playing passes that they weren’t comfortable making,” said Ambrose. “They never could hold the ball long enough to make any dangerous attacking opportunities.”

The off-season development of the Vanderbilt back three—Nia Dorsey, Myra Konte, and Ella Shamburger—should be instrumental in helping the Commodores in their pursuit of a repeat SEC regular season crown. In fact, Shamburger was one of twenty women to be selected to play for the U-23 U.S. Women’s National Team in Spain last week, where she competed against other U-23 teams hailing from France, Italy, and Sweden.

In addition to dominant tactical play, Vanderbilt’s performance against Kennesaw State provided a glimpse of some of the rising leaders that will have to fill the void of departing seniors in the coming season.

“Our captains, Lauren [Demarchi] and Nia [Dorsey], lead by example,” said Ambrose. “Grace Jackson is another who shows up everyday and does her job. That group in general does a really nice job.”

The maintenance of Vanderbilt’s strong core and the ascension of leaders such as Dorsey, Demarchi, and Jackson should help make for an exciting 2019 season for the Commodores.

“I think that everyone has really developed over the spring, and we’re expecting some big things in the fall,” said Kelley.