Lunch with Jerry Stackhouse: Bringing the Memorial Magic back to Vanderbilt students 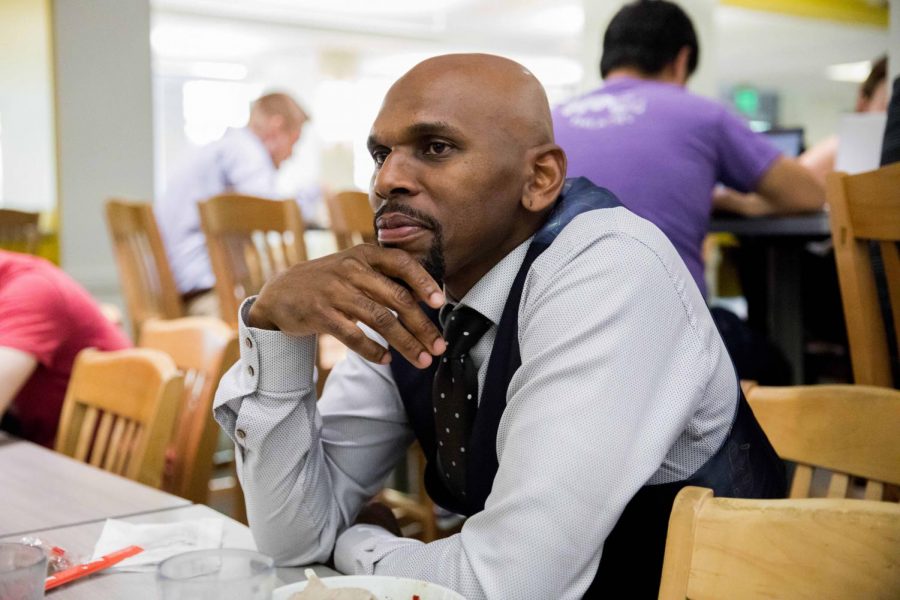 As noon approached on an early April Tuesday, Vanderbilt students converged on Rand Dining Center to grab a bite to eat and refuel before heading to afternoon classes.

And then, Jerry Stackhouse walked in.

His 6’6” frame and snazzy three-piece suit drew attention right away, and he stopped to shake hands with students and dining employees. But, he was there for the same reason as any other student: to get some food and unwind for a few minutes.

He selected his ingredients from the Mongolian noodle bowl station and waited for his bowl to be heated up, just like any student would. The chef called out his name to pick up his order, just like any other student. With the exception of a slightly shocked look on the chef’s face when Stackhouse claimed his bowl, nothing felt out of the ordinary.

While this particular trip to Rand for the new Vanderbilt Basketball head coach was for a planned meeting with a few student journalists, it likely won’t be the last time he takes a stroll through the hub of Vanderbilt’s campus. While he will be trying to establish his team’s culture and help push the program into the future, Stackhouse wants to make sure he has the entire university and its students behind him the whole time.
Building the Buzz 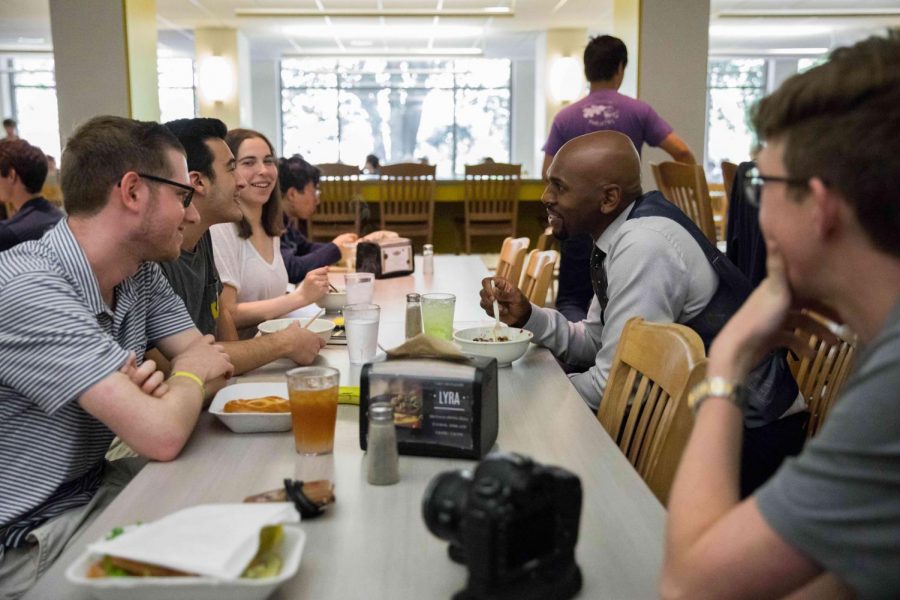 Stackhouse never got to play in Memorial Gym in his collegiate career at North Carolina, but that doesn’t mean he can’t appreciate the aura around one of the iconic old barns in college basketball.

This past season, the “Memorial Magic” made some brief appearances during some of Darius Garland’s early-season games and particularly during an epic clash with Tennessee. The Magic that boosted players like Shan Foster and Will Perdue to take down the giants of the SEC peeked its head out of its burrow, even if only for a few moments.

For the new Men’s Basketball boss, having that type of home court advantage is vital, and it starts at the grassroots level by making sure the students and the Vanderbilt community are involved at every turn.

“We have to have the fans engaged and make this a place that they want to be every time we open the gym and step on the floor,” Stackhouse said. “That’s what I would want to create, that these fans start to believe that they are a part of our success. I think on really good teams that I’ve been on, the guy that popped the popcorn, he felt like if he didn’t pop the popcorn right, we weren’t going to win. We want our fans to feel that way that we need them in the building and excited for us to win. They’ve had a good run with these five-star guys like Darius [Garland] and what not, maybe we’re getting four stars and three stars, and we need a competitive advantage, and that advantage could be our student body.”

One way that Stackhouse wants to earn that support is by encouraging the student body to take ownership of the program. Across collegiate athletics, there can be a perceived gap between athletics and the rest of campus. Stackhouse wants to emphasize the fact that the players that wear the black and gold uniforms represent the whole university, including the entire student body.

That’s why small gestures such as eating lunch in Rand or taking a walk through campus can go a long way. Being seen amongst the general student population is a way to make students feel like Stackhouse and his players are just as much a part of the university as their professors and classmates.

“This is their team,” Stackhouse said. “We want them to feel that it’s their team. That’s why you have to engage. It seems like a simple thing, but just being able to come here and have lunch. It’s easy to go to a restaurant, but maybe it’s coming in here at this time and being able to see students, and have them see us. Not just myself, but our whole staff, to be just kind of in their space. This is our space. I think once they understand that you’re willing to walk the same aisles and do the same things as they do, they feel that they want to reciprocate the same way. That’s going to be a part of our plan going forward, to try and be as engaged that we can be something where we are a representation of the student body and not the other way around.”

For Stackhouse, the program’s contributions to Vanderbilt’s culture are perhaps just as important as the culture within the program.
What’s in a Culture? 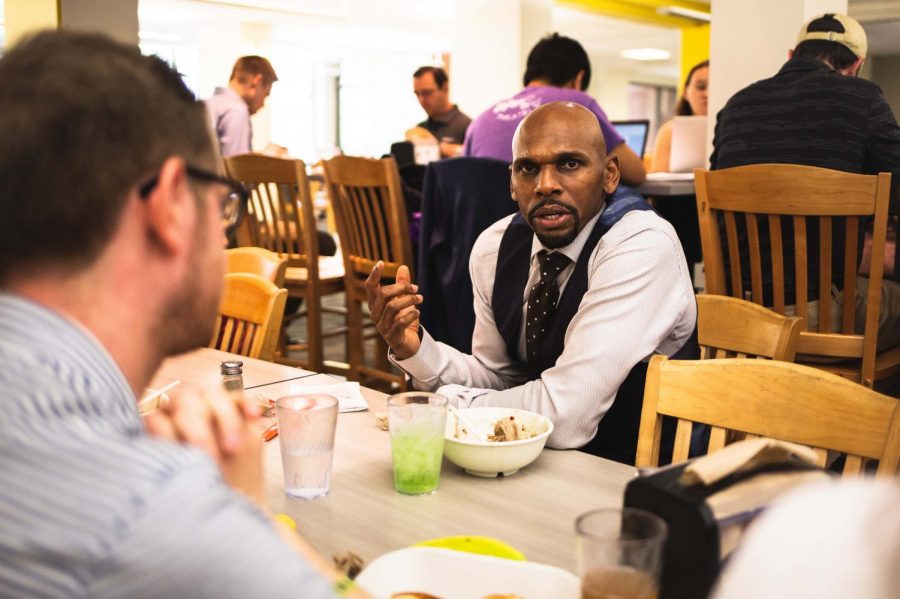 As the head coach of the Toronto Raptors’ G League franchise, Raptors 905, Stackhouse walked into a room of 15 players he had no relationships with and was tasked with building a culture from scratch. He had clear expectations for the team, and he was able to build a winning culture that culminated in a G League championship in his first season.

The following year, 15 new players were on the 905, and Stackhouse was forced to rebuild his culture all over again with the same level of success as the previous year.

College basketball experiences much less turnover than the G League, but Stackhouse was still faced with a similar situation as his first season in the G League when he met his Commodore team over the weekend. He has to win over a team that was recruited by the previous coaching staff and who are only old enough to remember Stackhouse as a reliable, tough sixth man, not the All-Star he was earlier in his career.

Stackhouse said, “Culture is a funny word. Culture is really the people that you’ve got involved. By all accounts of what I’ve heard, these guys are great guys, so it’s not about having to deal with a whole lot of negative energy, bad attitudes, and bad personalities. I look at that as a positive right out of the gate. I had those teams that I built [in the G League], and I had to deal with that, almost to the point where you were the exception if you continued to stay in the lane because we had more guys that bought into what we needed to do and what we were trying to do things the right way. And it works. Guys get on board, and they feel like they want to be a part of something, as opposed to being out there on your own.”

Possibly more important than simply getting his players on board with his culture and vision is training them according to the principles of his hard-working culture based on accountability.

Developing a new culture is just one of the many changes Stackhouse envisions for his program. Perhaps the most visible mark Stackhouse wants to leave on the program in the near future is improvements to Memorial Gym.
The Future is Now at Memorial Gym 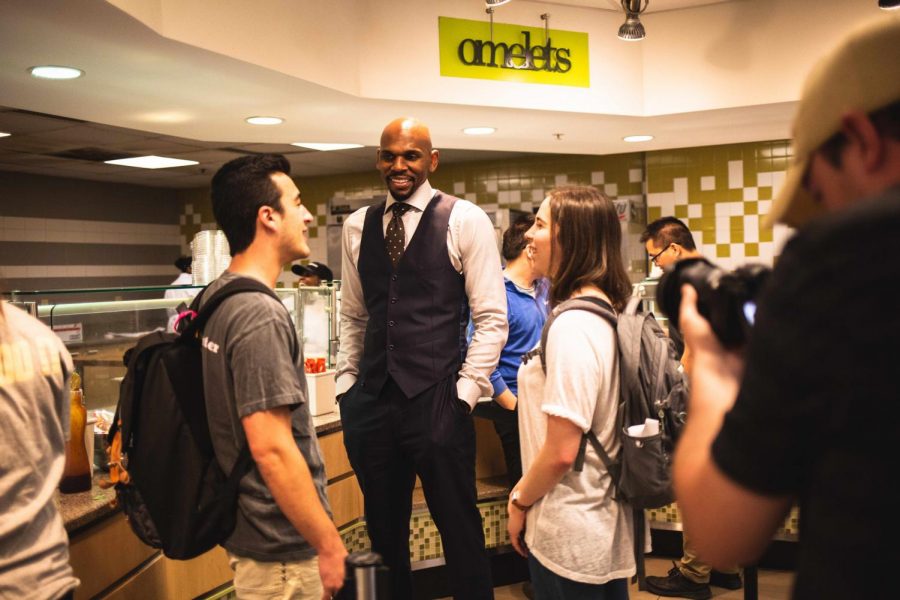 Memorial Gymnasium, home to the Vanderbilt Commodores, first opened its doors to the public in 1952. This makes it the oldest arena in the Southeastern Conference, and as such, it comes with a unique charisma.

“Just looking at the mystique walking in the arena, I love the arena,” said Stackhouse as he enjoyed his Rand meal just a few steps away from the storied landmark.

He acknowledged some of the factors that make Memorial a historic and unique, yet often confusing location for visiting teams. One of those very factors is the bench location under each basket–unlike every other arena in college basketball. These oddities contribute to the narrative of both the stadium and Commodore basketball.

And they’re not going anywhere, even as Stackhouse seeks to modernize Memorial Gym.

“I don’t want to get away from what I felt when I walked in there for the first time,” said Stackhouse. “Obviously, we want to be able to make a presentation to recruits and everything, because when they go and visit other schools, we want to be on par with them, but at the same time, maintaining some of the history and some of the authentic feel of it.”

The history will only become more nuanced with time, but at the same time, some of the more frustrating, outdated traits of such an old gymnasium are ready for some change, according to Stackhouse. Commodore fans, players, and coaches have waited patiently for far too long.

They’ve watched Tim Corbin’s baseball team turn Vanderbilt Baseball’s facility into an MLB-caliber establishment. Meanwhile, in Memorial, the players spend the pregame in older locker rooms, and fans sitting in sections 2A through 2K have an obscured view of the center court video boards. Yet, the only major improvements to Memorial Gym have been adding a new center court Jumbotron and new ribbon boards.

If the first week of the Jerry Stackhouse Era has proven anything, it’s that the future is now. Change is on the horizon.

“We have some plans to make some cosmetic changes and some upgrades to the arena,” said Stackhouse.

The first change, he hopes, is to the locker room.

“Locker room is huge,” Stackhouse said. “Guys want to know that their space is a very nice space. There’s actually space to do something. There’s a really nice shell, and we’ve got to go outside [the current walls] to do things right. And we’re going to do it. [Athletic Director] Malcolm [Turner] is committed to doing it, and he’s giving me a lot of autonomy to make those decisions that I think, If I feel this should be here, this should be there, we will utilize space. We will take advantage of it and will make a space where these guys feel like they want to be here.”

Just one full day after his introductory press conference, Stackhouse made it clear that change will happen. It all starts with head coach Stackhouse, but the responsibility also falls on his counterpart: Athletic Director Malcolm Turner.

Stackhouse and Turner have already developed a strong relationship, and they plan to work in tandem to address the needs of their student-athletes and their Memorial Gym facilities.

The history will remain intact, but the future is now. Welcome to the Stackhouse Era.