Bleday plays the hero as Commodores walk off on Hilltoppers 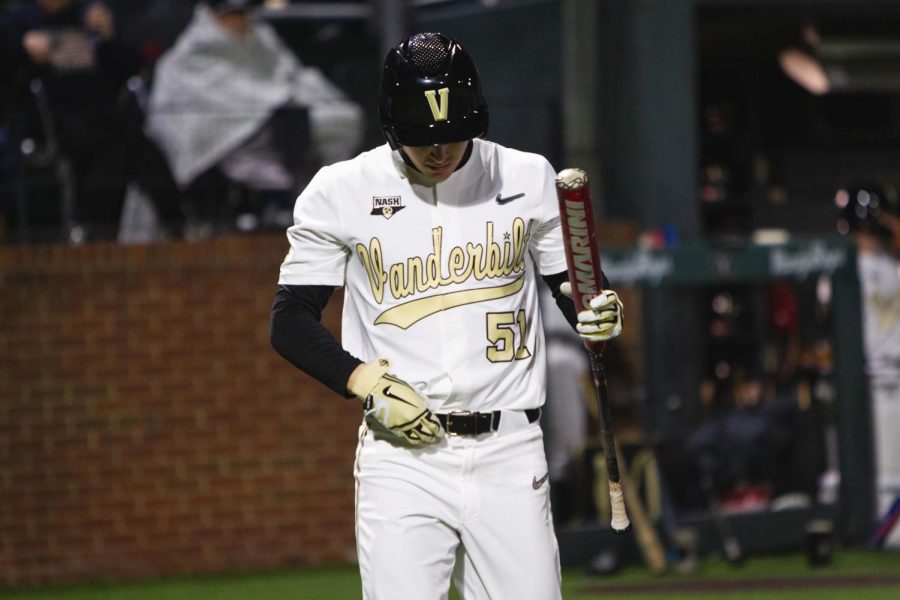 It took 10 innings, but the Vanderbilt Commodores (23-6) squeaked out a 5-4 win over the Western Kentucky Hilltoppers (14-12) on Tuesday night at Hawkins field.

With sophomore Mason Hickman on the mound, the Commodores squared off with a tough Western Kentucky team and left hander Jack Lambert as the starting pitcher.

Vanderbilt struggled to get the bats going tonight early, as Coach Tim Corbin pointed out.

“He [Lambert] was mixing his pitches and throwing a lot of off speed pitches in hitters counts,” Corbin said. “We just couldn’t get to him. He frustrated us, you could tell.”

Facing six lefties in Vanderbilt’s order, Lambert painted the outside corner and forced many pop ups and shallow fly balls in four and one third quality innings.

But as the ninth inning rolled around and the Commodores still down 4-2, the heart of this loaded Vanderbilt order delivered.  Sophomore Austin Martin continues to be a force at the plate and tonight he stepped up first in the ninth and blasted a solo home run to deep left field to cut the deficit in half.

Then JJ Bleday continued his incredible season and hit his SEC-leading 12th home run of the year to tie the game up.

“I was just looking for something up and I got in a good hitters count 3-1 and he left one up, I put a good swing on it and thankfully it got out of here,” he said.

That sent the game into extras and the Commodores took care of business from there.

Reliever Ethan Smith threw a great top of the tenth inning and Ethan Paul drew a walk to start the bottom of the extra inning. Corbin then called for two bunts, which created runners on second and third for Bleday.

The slugger put a good swing on a fastball and lined one up the middle for the walk-off single.

Corbin has an enormous amount of trust in his junior right fielder saying afterwards, “You have high believability in him because he contains the zone and understands hitting.”

Bleday and Martin continue to be a devastating duo for opposing pitchers and will be relied on heavily by Corbin to continue to produce.  Martin exits Tuesday’s game with a .452 batting average and added three more hits tonight. Bleday had two more hits and two more RBIs to further solidify himself as one of the top hitters in the SEC.

Hickman was just a touch off early as the starting pitcher, as the Hilltoppers hit him early and ended his 25 inning scoreless streak.  However, he settled in as the game went on, retiring 10 batters in a row between the fifth and seventh innings en route to seven strong innings.

Corbin praised his right hander for a solid outing.

“He pitched very well…He did a real nice job of just staying in the ball game and I thought he got better as time went on.”

After four doubles in the first two innings, the Hilltoppers jumped out to a 2-0 lead early.  The Commodores continued to battle throughout the game, getting one back in the second and another in the fifth, and finally broke through in the ninth and tenth innings to secure the win.  Hickman was finished after seven innings with nine strikeouts in a no decision.

Vanderbilt will be heading on the road this weekend for a huge series against SEC-leading Georgia in Athens.  The Commodores will bring a 23-6 record to Athens on Friday for the first of three with the Bulldogs.