Jordan Peele continues his horror hot-streak with ‘Us’ 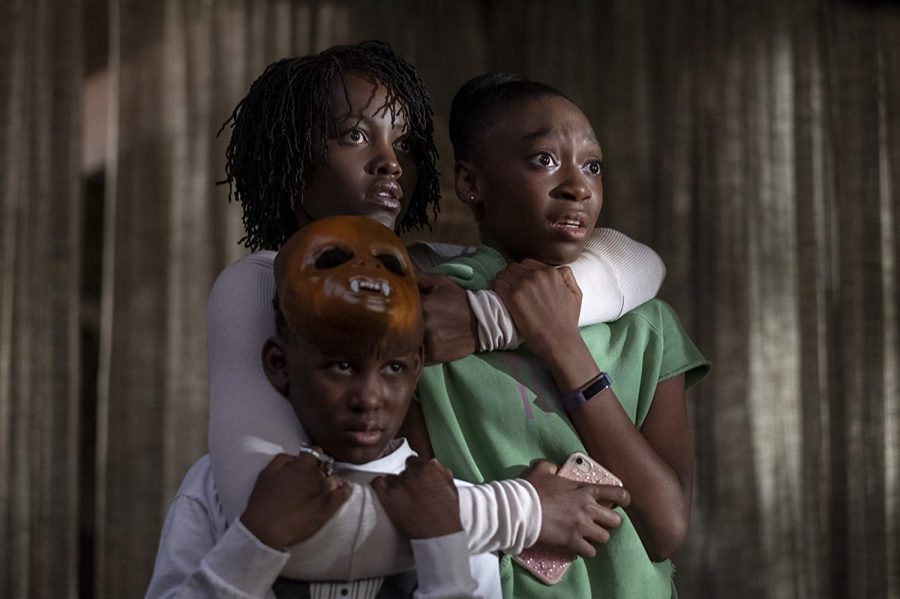 A young girl wanders aimlessly through the Santa Cruz pier. The bright lights and buzzing sounds of the fair drive anxiety into her innocent eyes. She clenches her caramel apple tighter. She paces past the chaos of the rides onto the beach, where she discovers a funhouse standing menacingly before her. “Find yourself,”  its sign beckons. She drops her apple in the sand. She enters, pacing through a endless hall of mirrors. She begins to shake as she struggles to find an exit. She searches relentlessly until she freezes, staring at a reflection that moves on its own. Her eyes widen in horror.

The opening to Jordan Peele’s Us is as poignant as that of its predecessor, Get Out. After two years, horror fans across the country wondered how Peele would follow up his smash-hit debut. With only a few vague trailers and promotional posters, it seemed the director wanted as little as possible to be revealed before the film’s release, and for good reason. Us offers a visceral, striking horror-comedy that, in my opinion, equals its predecessor.

Us differs greatly from Get Out in everything from its scale, plot and themes. While Get Out delivered a clear and unique statement on race relations in modern-day America, Us’ ultimate message is far more vague, and can be interpreted in many different ways. Us’ premise and ultimate revelations are also far more ambitious than that of Get Out in both their concept and execution. It’s clear that Peele wished to tackle a larger and entirely different thematic ballpark than his beloved debut. That being said, I believe everyone should go into the movie with as open a mind as possible.

One aspect that Us improves upon from Get Out is its fusion of horror and comedy. While Get Out was quite hilarious, most of the comedy came from the well-written but detached character of Rod Williams, played brilliantly by Lil Rel Howery. Get Out would build the tension and scares, then relieve it with Williams’ hilarious one liners and commentary. Us, however, displays the horror and comedy simultaneously. There were many scenes where I found myself in stitches while still feeling horrified. You laugh because you are so unsettled. Peele boils the genre-bending down to a science as something as specific as a single shot would amuse and terrify at the same time. There were times, however, where the jokes became a bit overbearing, and deflate rather than elevate the scares.

Much of Us’ comedy comes through its performances, particularly Winston Duke as Gabe, the father of the main family. Shahadi Wright and Evan Alex also offer terrific performances as the two children, and Tim Heidecker and Elisabeth Moss bring loads of laughs and scares as well. Lupita Nyong’o as Adeline, however, steals the entire movie. Every word, mannerism and look she delivered was filled with the character’s anxieties and paranoia. She absolutely commands every frame of screen time she holds, both as the protagonist and, without giving too much away, the main antagonist.

Us’ script excels in everything from its unique concept to its clever and hilarious dialogue. The plot progression and continuous revelations throughout the film are executed perfectly. Its story hops perfectly between past and present, as we learn more and more about the film’s protagonist. The only negatives I can find are the few bouts of exposition where a character explains what is happening. Not only is this a particularly lazy means of progressing the plot, they dampen the film’s otherwise relentlessly fast pace. The eventual plot twist is also left purposefully vague, allowing for a variety of interpretations.  It also, however, allows audiences to poke holes and cut the twist’s logic to pieces, exposing another of the film’s few weaknesses.

Peele’s direction is also at its best in Us. Not only is the film shot beautifully, Peele implements many clever details and reincorporation that will certainly reward repeated viewings. The film has a very controlled, purposeful and ominous tone that the director instils from the very first scene. After the overnight success of Get Out, Us cements Jordan Peele’s status as a horror-mastermind of this generation.

Us is currently in theaters, and you can watch the trailer here.