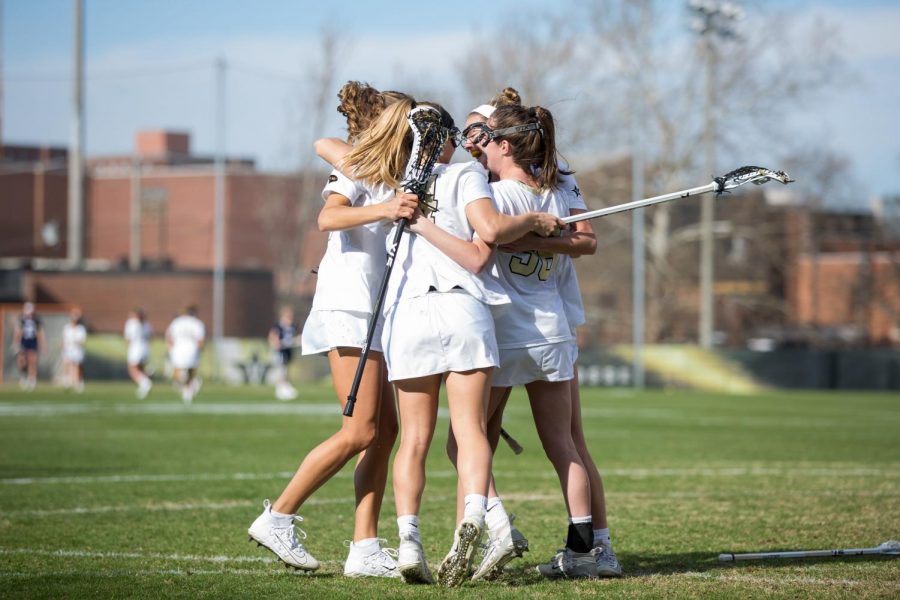 After a tough loss to Notre Dame in South Bend this past Wednesday, the Commodores (8-2) returned home and dominated the Butler Bulldogs (3-7) on Sunday in Nashville.  The Commodores got off to a fantastic start, scoring five goals in the first 10 minutes of the game en route to a 19-2 drubbing of Butler to continue their perfect 5-0 home record.

Coach Beth Hewitt was proud of her team’s ability to bounce back after a loss and execute properly on the day.

“Our goal of the day was to get back on track after Wednesday, and I thought the whole crew did a really great job of following the game plan and executing together,” she said.

Senior Hadley Brown also commented on learning from the loss to Notre Dame, but using it as a positive for this game.

“I think just channeling some energy from Wednesday’s loss into today helped us a lot,” Brown said.

Brown did her part, contributing two goals and two assists.  But offensively, it was really an all around effort as 13 Commodores scored goals.  Sophie Furlong kicked off the scoring with a beautiful unassisted goal just two minutes into the game.  She continued her success with two more goals and added two assists.

Attacker Gabrielle Fornia continued her tremendous play as she added to her assist total with three more, which should keep her firmly inside the top 10 in terms of assists for the entire NCAA.  In addition, freshmen attackers Olivia Lagomarsino and Megan Macgillis scored their first collegiate goals in the second half of the game.

As the Commodores enter the home stretch of their season and conference play, Brown stressed the importance of keeping a narrow focus as the season winds down.

“We have been talking a lot about having to focus on ourselves instead of the other teams so I think that is something that is going to be very important throughout conference play,” she said.

Hewitt echoed her senior’s words regarding the beginning of conference play, saying her team needs to focus on the details and taking it one game at a time.

“We feel like we are getting off to really good starts and then in the second half we don’t feel like we are as organized as we want to be so we are really focused on that,” Hewitt said. “And taking it one game at a time now that we are in a conference.”

Vanderbilt is back in action on the road on March 31st when they travel to take on East Carolina for the first game in conference play.