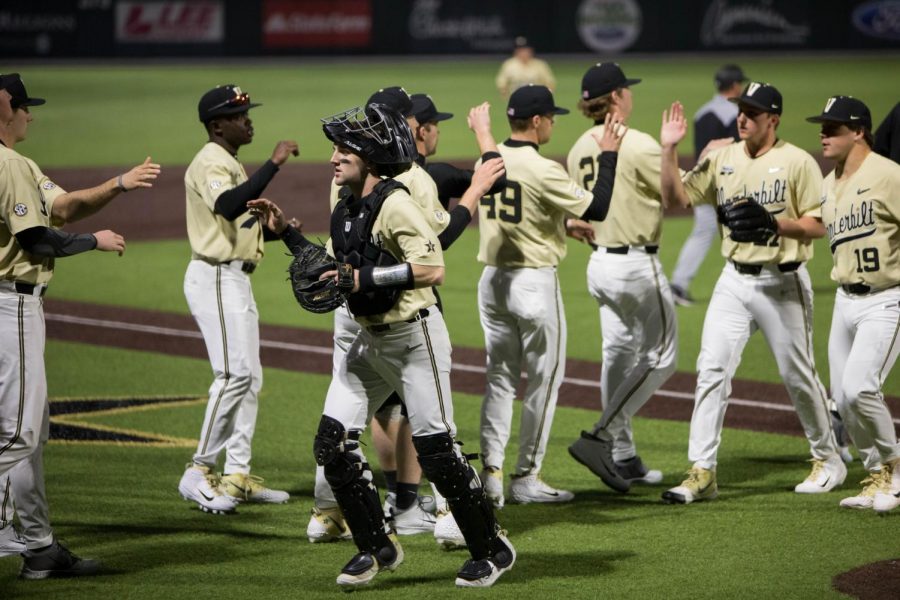 On a beautiful spring Thursday night, the Vanderbilt Commodores kicked off a three-game weekend series against the Florida Gators.

This would be the start of Vanderbilt’s second SEC series, and its second against a particularly talented opponent. The Gators are not to be taken lightly, as they entered the contest ranked 14th in the nation, third in the conference in runs scored, and second in hits. With a rather inconsistent Drake Fellows on the mound for the Commodores, many expected this matchup to be a slugfest.

However, in a gripping pitching duel, the Commodores came out on top 5 – 0.

The game got off to as good of a start as the Commodores could’ve asked for–Fellows had no trouble in the top of the first, while the top of Vanderbilt’s order was able to make a dent in the scoreboard shortly thereafter.

What began with Cooper Davis’ softly-hit infield single ended with a wild throw to first, easily advancing the leadoff batter to second. Then, JJ Bleday’s deep double to left field brought Davis home, putting the Commodores on the board.

The game went quiet for a few innings, as the pitchers controlled the pace of play.

Eventually, in the bottom of the fourth, the Commodores were able to put a few more runners on base. Ethan Paul drove one home with a sacrifice groundout, but that hardly served as insurance. Vanderbilt’s 2-0 lead was still too close for comfort.

Luckily, Fellows was having a terrific night on the mound.

Through seven innings, Fellows had pitched a gem. He did not allow a single earned run, struck out seven, and only forfeited two hits and three walks.

In the bottom of the seventh, the Gators’ pitching began to slip.

After a pair of Commodore singles, the Gators failed to take matters into their own hands. In fact, they proceeded to walk, plunk, and throw balls away, starting the Vanderbilt merry-go-round. Florida’s misery continued, as three Commodores merely had to jog their way from base to base to reach home safely.

With a 5-0 lead entering the 8th inning, Head Coach Tim Corbin felt comfortable leaving Fellows in the game. This, in theory, could pay dividends for the Commodores: if Fellows pitches well, Corbin can save his relievers for the next two games. If Fellows’ performance declines, however, the Commodores could be stuck in a familiar narrative–letting comfortable leads slip from their grasp.

“We had the ‘pen ready,” said Corbin. “I just don’t think you ever feel comfortable with anything until it’s over with.”

The inning began with a pop-out, but quickly took a turn for the worst.

Fellows continued to let up two singles, and fans crossed their fingers. It seemed like the Gators were ready to make their rebuttal.

Florida’s Nelson Maldonaldo launched a pop out to right field, but it had the distance to advance a runner from second to third. After JJ Bleday secured the fly ball, he planted his foot and launched a rocket to third.

The tagging runner had clearly beaten out the throw, but after he slid head-first into the bag, third baseman Austin Martin remained attentive. The slide brought the runner just an inch past the bag, and Martin quickly applied the tag before the runner could lay a finger back on the base. After video confirmation, the double play was confirmed–Bleday’s arm, coupled with Martin’s heads-up play, awarded the Commodores an exit route.

“JJ’s play, catching the ball, getting his foot behind it, throwing to third base, and putting the tag was certainly a big play at the time. I don’t know if Drake finishes that game if we don’t get that out,” said Corbin.

When the top of the ninth inning rolled around, Corbin didn’t hesitate to roll the dice once more.

As the Commodores left the dugout and manned their positions, the mound was briefly left unoccupied.

Fans kept their eyes peeled on the dugout, until eventually, Fellows was greeted with a standing ovation as he came out for his ninth inning.

Fellows continued to do what he had done so well all night. Even after letting up an extra base hit, he remained calm and collected. One line out, one strikeout, and one groundout later, Fellows completed his gem of a complete game: nine frames and eight strikeouts, all while not forfeiting a run.

“I think the story line is Drake,” Corbin said. “To get into a game, complete it, and keep the team off the scoreboard, especially a Florida team. It’s just a nice job of pitching.”

The Commodores will face off against the Gators twice more this weekend, but now, they will do so with more confidence and a well-rested bullpen.