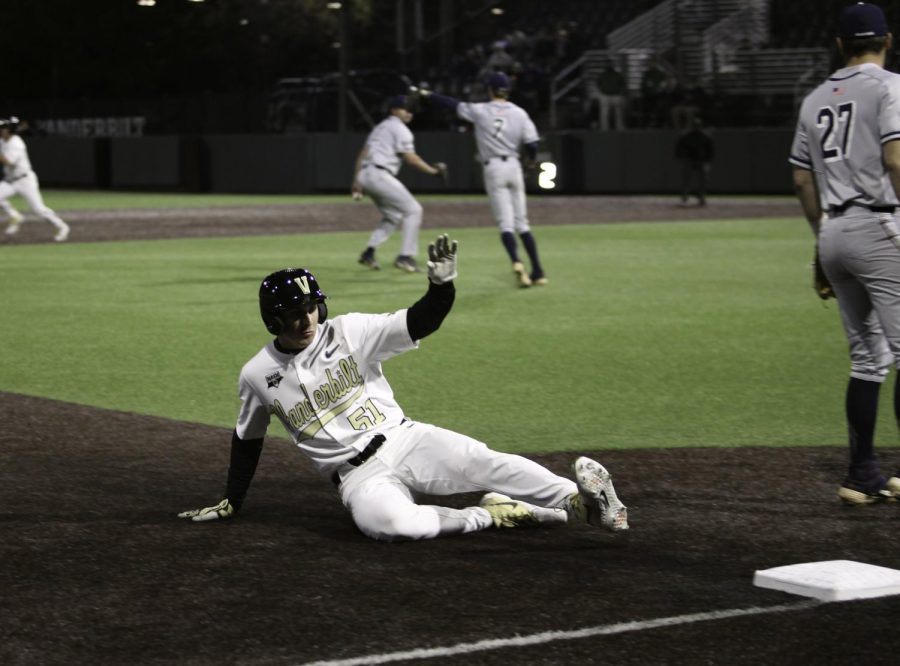 In their final matchup of a fourteen-game homestand, the Vanderbilt Commodores defeated the Samford Bulldogs 11-6.

Samford was first to put runs on the board with an RBI single and a bases-loaded walk in the top of the first. The Commodores stranded three baserunners, but were forced to turn to Jackson Gillis for relief after starting pitcher Chance Huff was only able to record two outs.

The Vanderbilt bats responded quickly. Each of the Commodores’ first ten batters reached base and Vanderbilt scored seven runs before Samford recorded a single out.

In a 57-minute first inning with two Samford pitching changes and 13 at-bats, Vanderbilt put up nine runs. It was the Commodores’ highest-scoring first inning since their March 17, 2010 matchup against Western Kentucky.

An Ethan Paul sacrifice fly to deep right field extended the Commodores’ lead to 10-2 in the second inning.

“[Paul] is doing a really good job in all facets of the game,” Corbin said. “He might be the most consistent player we have on this team.”

The eight-run deficit wasn’t enough to quell the Bulldogs, who posted a four-run third inning with RBI singles from Preston Moore and Branden Fryman. Nevertheless, the Commodores were able to interrupt Samford’s momentum when Jayson Gonzalez pulled off an impressive hidden ball trick to tag out the runner at third base.

Both teams would go quietly for the rest of the game, with the only additional run being an infield single RBI by Ethan Paul in the bottom of the eighth.

Eight different players had an RBI in the win despite the fact that the Commodores only had nine total hits.

The Commodores put up a decent defensive effort, allowing seven hits and one error. Mason Hickman earned the win with four innings pitched including four strikeouts and no walks.

“The pitching was very good,” Corbin added. “It got us deep into that ballgame which was much needed against a very dangerous offensive team.”

The win moves the Commodores to 14-3 before the start of SEC play. The team will head to College Station, Texas to play a three-game series against #19 Texas A&M this weekend.