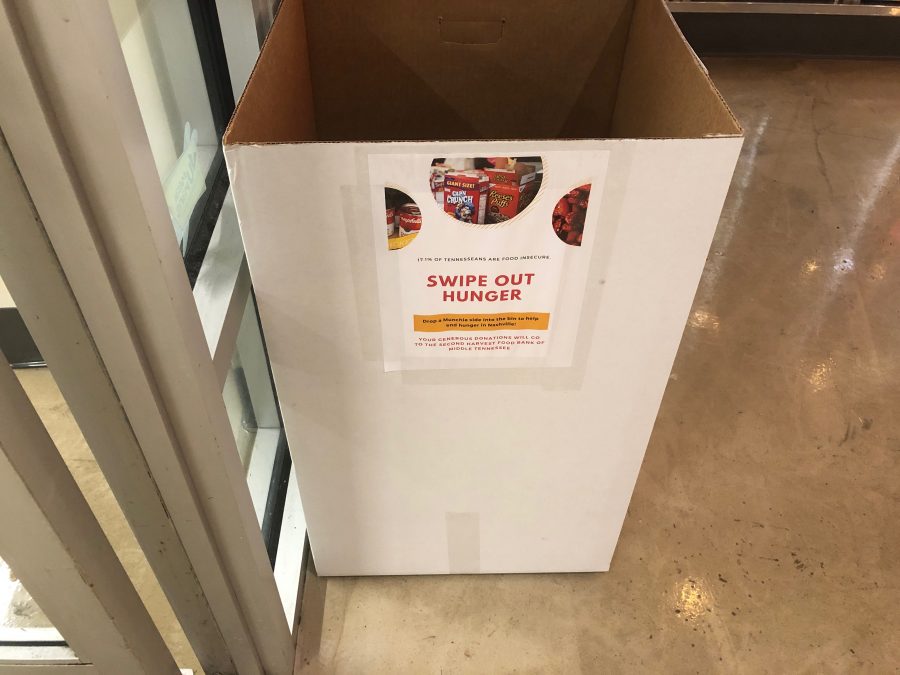 Bins are placed in all Munchie Mart locations except for Rand to collect donations. (Photo by Rachel Friedman)

Over winter break, as seniors Arunabh Singh and Gloria Liu contemplated their upcoming final semester on campus, they decided they wanted to leave their mark on Vanderbilt.

This inspired the idea to start a food drive on campus, placing bins placed in Munchie Marts to gather donations to the Second Harvest Foodbank of Middle Tennessee. Their plan came to fruition Feb. 4; over the next two weeks, students can donate non-perishable food items in any of the Munchie Marts on campus aside from Rand.

“One of the things that we noticed is that usually after natural disasters, there will be donation bins to collect food to go to people in need,” Liu said. “But what we’ve found is that there’s a high level of food insecurity right here in Nashville.”

Singh and Liu decided to give donations to the Second Harvest Food Bank because the organization has partnered with Vanderbilt groups before, and it has a large distribution network, Singh said. Furthermore, the students’ idea to orient the program around placing bins in Munchie Marts came from the observation that when students have extra meal swipes or sides, especially freshman, many students redeem them at the Munchie Marts. This extra food can provide a constant supply for donations.

“Instead of racking all that up, why not have an opportunity at any time of the year to pass that forward and be mindful about that at all times,” Singh said.

The students coordinated with Campus Dining in order to get permission to place the bins in the Munchie Marts, and Dining was accommodating in helping the students make their idea a reality, Liu said. Notably, the Campus Dining staff agreed to place bins in all Munchie Marts except Rand, which has fewer nonperishable goods compared to other locations, said Julie Akard Crider, Marketing and Communications Manager of Campus Dining.

During the pilot, Liu and Singh are in charge of bringing the donated items to the food bank. However, if the pilot is successful, it could be converted into a permanent program. When assessing the pilot after it ends Feb. 15, Dining will look at student participation and the timeliness of the pick-ups and drop-offs at the Food Bank, said Akard Crider. If made permanent, there would need to be more planning regarding the management of the program in the future, given that the pilot is entirely student-run, Akard Crider said.

For Singh and Liu, garnering enough participation during the pilot in order to lead to the program’s continuation after they have graduated is their main goal.

“We’re obviously taking this program with the assumption that students will be taking action on it and donating with all their excess swipes, excess sides, whatever other foods they have,” Singh said. “That’s one of our biggest hopes with this program, is that students really take action on this and do what they can.”