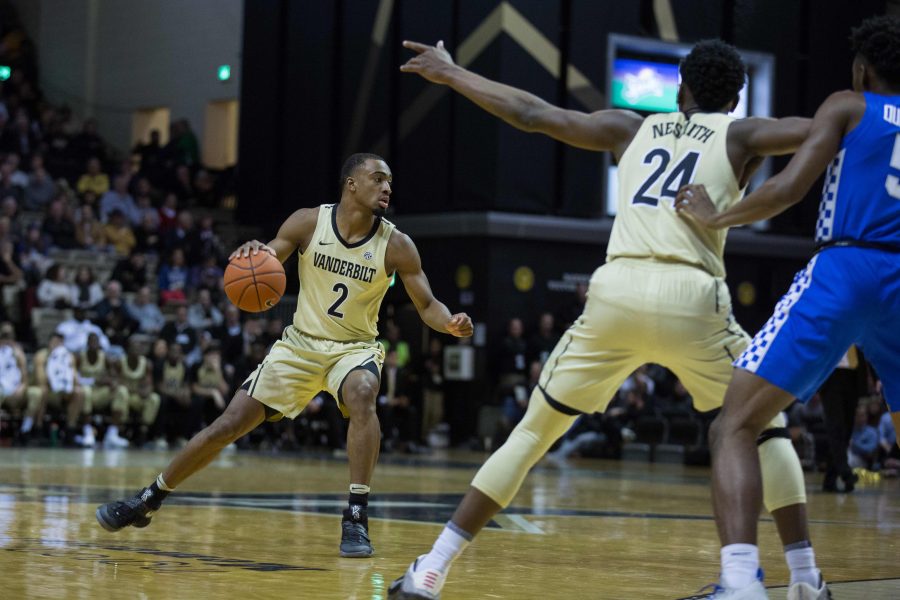 Just over two weeks ago, Vanderbilt traveled to Rupp Arena to take on the Kentucky Wildcats. Playing the Wildcats on the road is no crystal stair; in fact, few could’ve expected the Commodores to come close.

Even fewer predicted that Vanderbilt would amount a first half lead as large as 12, a halftime lead of 3, and ultimately fall victim to Kentucky, on the road, by just 9.

This Tuesday night, the Wildcats traveled to Nashville to face-off with the Commodores in Memorial. The result, a gut-wrenching, 87-52 Wildcat beatdown, is unfortunately what many SEC fans have come to expect.

The beginning of the game was far from indicative of its end result, as Vanderbilt kicked off the game with a three-point field goal from Saben Lee, followed by two made free throws from Lee.

With 13:20 left in the first half, Vanderbilt trailed just 12-10. That’s a manageable deficit.

Then, the Commodores’ luck ran out.

Kentucky seemed to repeatedly run the same play, but Vanderbilt defenders were getting caught up in same low screen each time. The play resulted in an open three point attempt for the Wildcats, and it began to get ugly.

Kentucky’s PJ Washington made a trey ball, along with Ashton Hagans, Immanuel Quickly, and two from Jemarl Baker. Vanderbilt soon found themselves in a deep hole.

The most concerning part?

Believe it or not, it wasn’t Vanderbilt’s lack of defense. During those 13 minutes of Wildcat domination, Vanderbilt’s offense managed to score just five points.

Five points, along with 14 turnovers.

Kentucky began to steamroll to the final whistle, as they left the Commodores behind by a whopping 30 points at halftime. The 45-15 margin was unacceptable for Bryce Drew’s Commodores.

Head coach Bryce Drew was faced with a conundrum: what do you say to the players, down by 30 to one of the best teams in the nation?

“It was unacceptable,” said Coach Drew. “We really challenged them at halftime, we told them to win the second half. Every segment, we were trying to win it and unfortunately we lost by five at the end. I was really proud of our fight in the second half. Through that whole 20 minutes we didn’t quit.”

Kentucky showed no signs of hitting the breaks.

The second half went at about the same pace; while Vanderbilt managed to score 47 points, it still wasn’t enough. Not even close to it.

Kentucky saw Vanderbilt’s 47 points, and put up 42 of their own.

Throughout the entirety of this matchup, the Vanderbilt Commodores made just 17 shots, missing half of their free throw attempts. In fact, their 17 made shots didn’t compare to their 20 turnovers.

Free throws have been a topic of concern this entire season. Bryce Drew has been assuring the media that it’s still a work in progress, but for the second time this season, his Commodores shot a mediocre 50% from the line. Will this linger?

“That’s been an achilles heal all year for us,” Drew said. “Again, I assure you we are working on it. I assure you these guys are in the gym working on it. The more they get to the line and watch the ball get through the basket, the more confident they will get. We proved in the middle of the year we could do it, during this stretch we just haven’t been able to win some games because of the free throws.”

Kentucky’s Johnny David, who had six minutes logged on the entire season, walked onto the court with two left in the game. He was greeted by the echoing chants, “Go Big Blue,” after nearly all the Vanderbilt fans had left.

“Bryce has done a heck of a job,” he said. “With the injuries and the other stuff that he’s dealing with? Oof. Again I’ve done this 35 years, but it all evens out. Whatever happened in that game, in this game, there’s going to be a bouncing ball that goes their way and you can say coach Cal told you so. Something is gonna happen and go their way.”