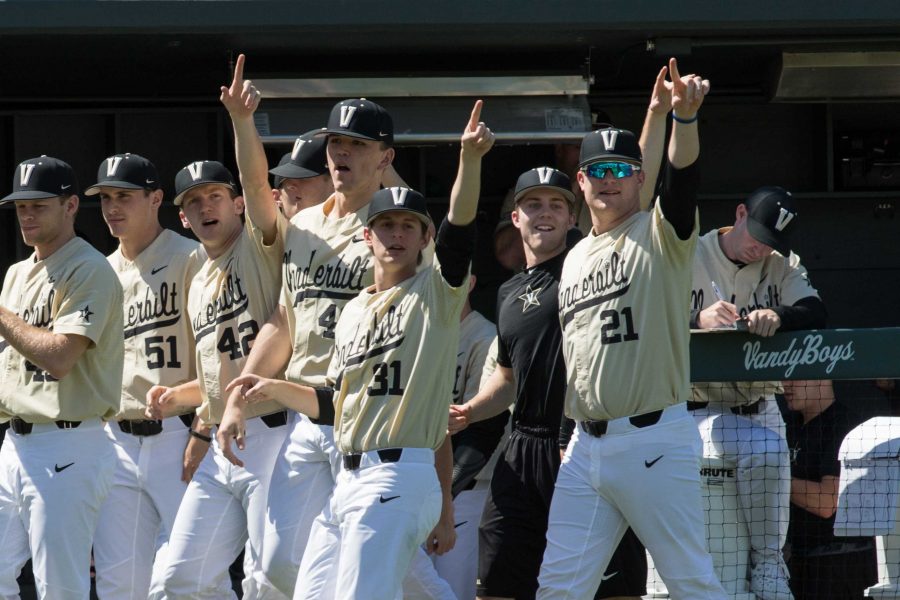 The Vandy Boys play the University of South Carolina on Saturday, April 28, 2018 at Hawkins Field. (Photo by Claire Barnett)

Head coach Tim Corbin and his staff bring in some of the best talent in the country each and every year to the Vanderbilt Baseball team. There’s a rite of passage for nearly all of the players.

They sit as a freshman and maybe see some playing time when a game is out of hand already. During their freshman year, these players are humbled, taught the “Tim Corbin way,” and develop on and off the field.

As a sophomore, many finally crack the starting lineup regularly, but Corbin never commits to a solid rotation, so they still will observe many games from the bench. As highly-touted recruits, most baseball players would be itching to transfer and get regular playing time. Those recruits don’t end up at Vanderbilt in the first place. Only the ones humble enough to understand Corbin’s process come to Nashville.

Junior year rolls around, and the pressure is on. Major league scouts are closely looking at the juniors, who are eligible to be drafted after the season. Scouts will tout each Commodore’s versatility, again to the credit of the “Tim Corbin way.”

Senior utilityman Stephen Scott said, “I think we’ve all been cross-trained. We’re all getting experience at a bunch of different positions. We’ve just got to be available for whichever position Corbs puts us in the lineup. That’s a big part of this team, and that really reflects our athletic ability.”

After their junior year, some players will get drafted in the first few rounds of the MLB draft and sign with a professional team.

Others decide to come back for their final year.

Corbin said, “I think there’s a sense of peace when a senior comes back to school. I think the toughest years to play at a place like Vanderbilt would be your freshman and junior years. Freshman year because it’s new, and junior year because of that year that everyone makes a big deal of.”

There’s many reasons to come back for a senior season, such as getting a Vanderbilt degree or improving your draft stock. Or maybe, the real reason players return is because they know the value of this brotherhood.

Senior first baseman Julian Infante said, “We’re getting a degree from one of the best universities in the country, and we’re excited for that. It prepares you for not just baseball, but for life in general. And you get to be with these guys every day like Stephen said, and that’s something special that doesn’t happen I don’t think anywhere else.”

This season, Vanderbilt has seven academic seniors, which is the most it’s had since 2008.

Corbin said, “They’re my favorites. I enjoy seniors. I love everything about them.”

The seniors act as an extension of the coaching staff both on and off the field.

“Being able to be in this position and help guys who are younger and help lead this team in any way we can is something we look forward to,” Paul said.

The seniors are prepared to both mentor and compete for playing time with the top-rated recruiting class in the country, according to Perfect Game.

“If there’s one area class-wise that depicts who we are, it’s certainly the pitching staff because from seniors to freshmen, we have a nice balance of kids,” sad Corbin.

Freshmen pitcher Kumar Rocker was one of the nation’s top pitching prospects coming out of high school, but Corbin would not commit to starting Rocker at the start of this season.

He said, “If he’s good enough he’ll pitch. If he’s not, he’ll pitch when he’s ready. That’s all there is to it regardless of who he is and what people think of him.”

In fact, Corbin would not even commit to keeping the same weekend rotation as last season of Patrick Raby, Drake Fellows, and Mason Hickman.

Corbin said, “I don’t know if that’s our rotation. Those were the three last year, but that was last year. I don’t know. We’ll put the best five guys out there in Week One because that will be the amount of games. But the first game will be whoever is the most consistent person.”

And such is the “Tim Corbin way.” Freshmen are expected to sit on the bench and learn, but at the end of the day, the best players will play.

Or at a place like Vanderbilt with an extremely talented roster, the best of the best will play.