At least three demonstrators were also referred to Student Accountability following the disruption. 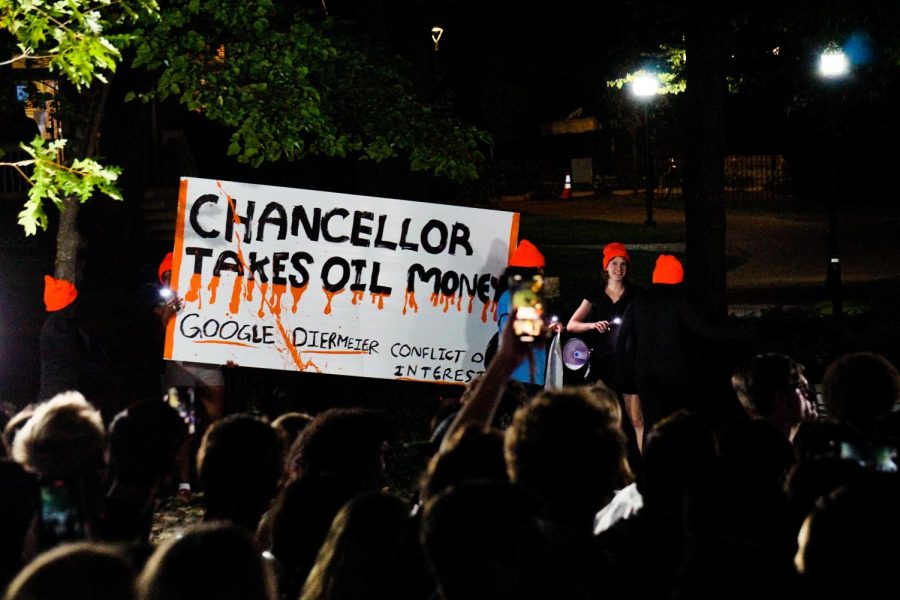 Editor’s Note: Author Aaditi Lele is a member of Dores Divest. Lele was not involved in this protest and did not conduct any interviews included in this piece.

Dores Divest, a group that advocates for Vanderbilt to divest from fossil fuels, held a demonstration during Chancellor Daniel Diermeier’s speech at Founders Walk on Aug. 21. The traditional event was also more formal than in previous years in an effort to mimic Commencement.

As Diermeier’s speech began, a group of student protesters from Dores Divest silently walked along the side of Alumni Lawn, holding a sign that read “Chancellor Takes Oil Money.” A second group of protesters in morph suits appeared halfway through Diermeier’s speech. Holding a sign that read “Vandy Divest Fossil Fuels,” they ran briefly in front of the stage. Similar to their protest during last year’s Founders Walk, they also handed out pamphlets to students.

A university representative told The Hustler that the university was aware of the protest and shared guidance with the group regarding in which areas they could protest under the university’s freedom of expression policy. In an Aug. 19 email to Dores Divest obtained by The Hustler, Assistant Dean for Community Standards and Student Support Neil Jamerson sent a map that showed areas where protesting was not allowed, areas where silent protest was allowed and areas where protest with “non-disruptive” noise was allowed.

“Protesters at the event who are deemed to have acted within the guidance will not face disciplinary action,” the email reads.

Miguel Moravec, Graduate Student Council president and third-year graduate student, was detained due to allegedly violating the university’s protesting policies. He said the purpose of the disruption was to introduce new students to the mission of Dores Divest and Diermeier’s alleged “improper business relationships” with the fossil fuel industry. Moravec also said he acknowledged the guidelines that the university had set up prior to the event, but “accepted the personal risk” associated with breaking them.

“It seems to me that the ‘no protest’ zones designated for Founders Walk this year were designed explicitly to prevent protesters from messing up the Univeristy’s photo op of the event,” Moravec said. “[We] decided to proceed anyway, not just to promote dialogue about the university’s role in fueling climate change, but also to invite conversations about the role of free speech on our beloved campus.”

“While I’ve normally had positive interactions with VUPD, I was surprised with how quickly the on-site officers resorted to physical force to detain us. A bike-mounted police officer pursued me and threatened to taze me if I didn’t halt,” Moravec said. “I surrendered and was released without incident after the fact.”

VUPD did not respond to The Hustler’s request for comment.

According to Moravec, an administrator asked whether he was an employee of the university shortly after the disruption. The university did not respond to The Hustler’s request for comment regarding the purpose of this question.

“When I replied affirmatively, he told me to expect a call from HR, I suspect to freeze my stipend,” Moravec said. “This would be my second and only other case with student accountability, the other instance of which was also for peaceful climate activism.”

Junior Annabelle Littlejohn-Bailey—a staff writer for The Hustler—said she was stopped by a VUPD officer before Founders Walk while carrying a sign for the Indigenous Scholars Organization (ISO) near McGill Hall—her residence hall and the location where Dores Divest met prior to the event. She stated that the officer demanded to see her poster and threatened to use Commodore Card swipe records to identify her if she did not do so herself. According to Littlejohn-Bailey, the officer also called his peers for support and said she was “uncooperative” when she did not immediately show him the sign. She also stated that a university representative later apologized for the VUPD officer’s actions.

“Even if I was protesting, I have the right to go to my dorm or even to stand outside my dorm and carry a sign,” Littlejohn-Bailey said. “[The university] say[s] they promote free speech, but the moment someone carries a sign, then that’s just not cool.”

Sophomore Luke Calhoon was similarly stopped by VUPD on their way to McGill Hall prior to Founders Walk. Calhoon said the officer asked to see their student ID, questioned them about why they were carrying an orange hat—a signature accessory of Dores Divest—and asked them if they were a member of Dores Divest. The officer also asked if Calhoon knew where Dores Divest was meeting prior to the event.

The university representative said in a statement to The Hustler that the university is committed to free expression and is working to combat climate change in ways that do not alter the endowment.

“We are committed to free expression and believe differences of opinion and diverse perspectives are fundamental to education and discovery,” the email reads. “Climate change is a topic we take seriously, and continue to address directly by identifying innovative solutions, decreasing our carbon footprint and investing significant funds and capacity into renewable energy and emission reduction strategies.”

“Our commitment to free expression has become all the more critical as we have weathered recent crises, upheaval and hardships resounding all over the world,” Diermeier said in an Aug. 24 email to students. “Given the intense divisiveness that pervades today’s politics, we believe it is our imperative to protect free expression within our community.”

The university representative also reiterated previous remarks from Diermeier and Raver on the protesters’ demand that the university divests its endowment from fossil fuel companies.

“Our endowment is not an advocacy tool,” the email reads. “Its sole purpose is and should be to support our students and our faculty.”

Like the Dores Divest protest at last year’s Founders Walk, first-year students had mixed reactions to this year’s protest. First-year Ellie Armstrong said the protest contributed to a lack of seriousness for the event among the Class of 2026.

“I feel like the Founders Walk already lacked a feeling of seriousness for a lot of the freshmen there, so all of the protest ‘excitement’ just really added to everyone already invalidating the legitimacy of the evening,” Armstrong said in a message to The Hustler.

First-year Hunter Reichel said he felt that the protest should have occurred at a different time.

“I think that, like all things, there’s a time and a place,” Reichel said. “I understand that the organization wanted to bring attention to an issue important to them, but if they want any progress to truly happen, they have to be willing to respect the university’s ceremonies and faculty.”

Isabella Backus, another first-year student, added that the protest was unclear in communicating how students could support the organization’s efforts.

“I thought it was very interesting, but they honestly went too fast for most of the undergraduates to read what the sign said,” Backus said.

Founders Walk also had a new, more formal format this year. The event was structured in reverse order than that of prior years, featuring a ceremony followed by a celebration with representatives of various student organizations. Unlike past years, students were not allowed to run through the aisle of student organizations. Students were also asked to dress in business casual attire and faculty, administrators and student speakers wore their regalia.

“This year, the Founders Walk ceremony is taking on a more formal tone in order to highlight the event as an official welcome tradition for incoming students,” a university representative said. “This year’s event is also designed to bookend with Commencement, with Founders Walk opening our undergraduate students’ time at Vanderbilt, and Commencement marking its end. Like Commencement, Founders Walk will now begin with a procession, a formal ceremony and finish with a large celebration.”

First-year Sydney Grossman first learned about Founders Walk during CommonVU Orientation and said she had looked forward to the event regardless of its new format.

“It’s super exciting and a really important part of feeling at home at Vandy,” Grossman said.

Abhinav Krishnan and Eigen Escario contributed reporting to this piece.

CORRECTION: This article was edited on Aug. 28, 2022, to correct the title of the Indigenous Scholars Organization.