‘Ms. Marvel’ is marvel-ous in every way

Marvel’s newest show teaches us the importance of learning about cultures that are typically underrepresented in the film industry. 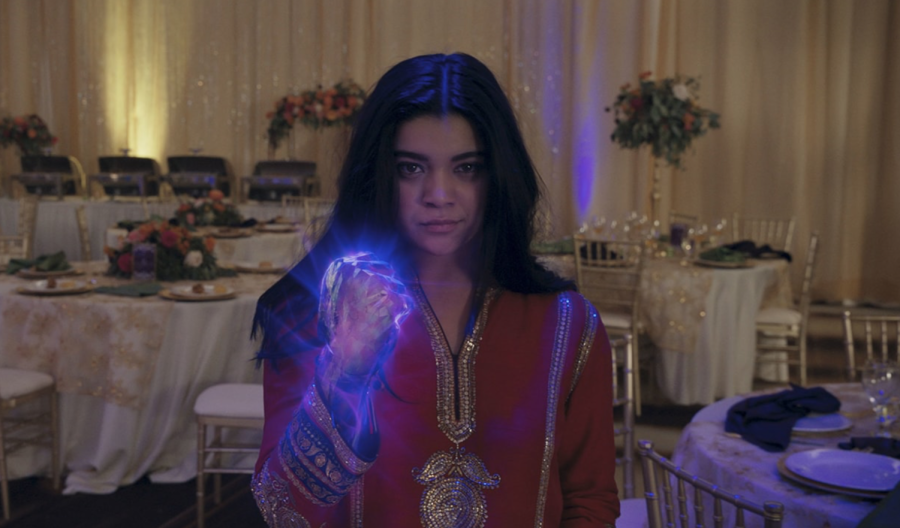 “Ms. Marvel” is, as the name suggests, the marvelous new addition to Marvel’s latest superhero show installments. The show is centered around Kamala Khan, a Muslim teenager living in New Jersey who comes to realize that she may possess superpowers similar to those of heroines and heroes she idolizes.

In the first episode of the series, “Generation Why,” Kamala can be seen struggling with her fantastical dreams of Captain Marvel, her idol, and her role as a daughter, friend, student and young woman in a strange and confusing world. Kamala experiences cognitive dissonance over her strict upbringing and her intense desire to attend AvengerCon, the first-ever gathering of fans to celebrate well-known Marvel heroes. After managing to make it to the convention following a slew of hurdles, Kamala wears what seemed to be nothing more than an ornamental bracelet but what later helps her to turn into a superhero herself. Interestingly, it’s revealed that the bracelet only unlocks Kamala’s powers, which really originate from inside her.

From the very first episode, it is clear that “Ms. Marvel” is significant in the future of the Marvel Cinematic Universe (MCU). First and foremost, Kamala’s identity as a Pakistani woman means a great deal to all the “brown girls in New Jersey” (to quote Kamala herself) who can change the world. Until now, there has been very minimal representation of Indian and Pakistani communities in many superhero franchises. Kamala represents a new age of superheroes in the MCU: the era of diversity.

The next two installments, “Crushed” and “Destined,” only further this new era of diversity. They both elucidate much about Pakistani culture by including snippets of Hindi and traditional Pakistani wedding celebrations. Scenes inside of a mosque also educate Marvel viewers about Kamala’s culture. The respect tailored toward exploring a new culture is definitely appreciated by viewers.

Interestingly, the idea of the Djinn, creatures of lore that have been likened to ghosts, also plays a key role in the story. When Kamala realizes that she is a Djinn and may have the power to help other Djinn return to their home by summoning Noor—light energy, the possibilities for the plot are endless. This ancient and generational folklore provides promising ground for the series.

The adventure continues with the latest installment of the series, “Seeing Red,” where Kamala travels to Pakistan to uncover the mysteries of her bracelet, family and past. The sights are a marvel to behold, from the cool action scenes with Noor to the sights of Pakistan.

The show is slated to have six episodes, like Marvel’s latest “Moon Knight” series. The first four episodes are now streaming on Disney+.

Stay tuned for more coverage on The Hustler!