Eagles continue to live ‘Life in the Fast Lane’ in Nashville

Time has had no effect in the band as they performed their classic rock discography at Bridgestone Arena on April 28. 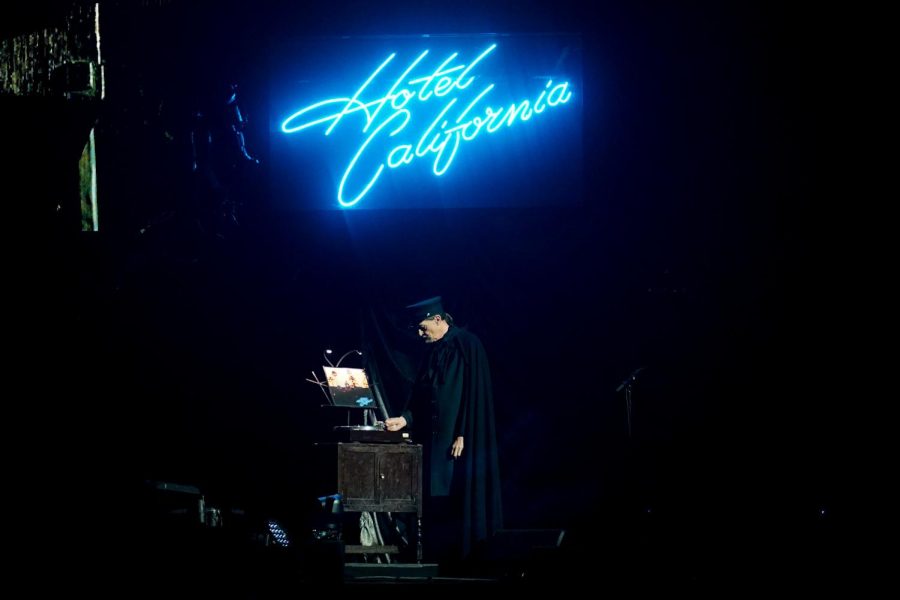 A mysterious figure kicked the Eagles concert off by putting the vinyl of the “Hotel California” album on a turntable, dropping the needle, as photographed on April 28, 2022. (Hustler Multimedia/Miguel Beristain)

One of the most influential and beloved bands ever is turning 50, but its music is as timeless as ever. The iconic Eagles gave it their all on the Bridgestone stage on April 28 with an atypical performance for a group of laidback seventy-year-olds.

The crowd consisted of die-hard Eagles fans, many of whom probably grew up listening to their music, and me, one of the few people in the crowd under thirty. I thought I was a big fan until I witnessed the passion of the old lady next to me, who jumped around during the concert so much that she had to apologize for bumping into me several times.

Band members Don Henley, Joe Walsh and Timothy B. Schmit, plus a newer, permanent addition to the band—country great Vince Gill—started the night off by covering the entire “Hotel California” album. As soon as the well-known lyrics of the legendary track started filling Bridgestone Arena, I realized the amount of fun I was about to have. The entire crowd sang along to every word (I did my best on bangers such as “Life in the Fast Lane” and “New Kid in Town”). The band then took a ten-minute break, before coming back for another two uninterrupted hours of their greatest hits.

What’s most impressive about the Eagles is their diversity of talent. For some songs, Walsh took to the piano and Gill sang. For others, Schmit sang and Henley accompanied with drums. Every time a song ended, the stage went black, and we watched the silhouettes of crew members carrying different instruments for each band member back and forth. Each member’s range is no doubt the result of long, long careers in rock music, culminating in a mastery of every role in the band.

The concert was a testament to the legendary musicians’ discography, as they managed to stay on the stage for three hours without running out of popular songs. Songs such as “One of These Nights,” “Lyin’ Eyes,” “Witchy Woman” and “Heartache Tonight” kept the audience singing all night long. Like drummer Henley said between songs, they’re “just a few guys with guitars, rocking it out, with no smoke machines or butt wagging” (boomer moment). It was admirable to watch them captivate their audience with the same kind of stage presence they occupied half a century ago.

Honestly, however, we have to give credit where credit is due: The Eagles experience did not start and end with their music. The ever-changing mega screens behind the band, setting the mood with effects and backgrounds fit for each song, definitely helped bump up the concert-quality—not to mention the full choir and orchestra (led by Music Row conductor Jim Ed Norman) that joined the performance. When the Fisk Jubilee Singers and a full set of violins start harmonizing with the rock legends in songs like “Wasted Time,” you know the Eagles’ claim to be just “a few guys with guitars” isn’t the whole story.

The band also played a few songs from Walsh and Henley’s solo discographies. I was warned by a friend who had previously seen the band live that Walsh would ask the crowd to make random noises, a la Live-Aid Freddie, but I was still taken aback when he asked the crowd: “Can I get a heughhhh?” (don’t know how else to describe it). Needless to say, Walsh stole the show with his insanity.

Walsh also gave the best quote of the night, referring to how the world around us seems to be getting crazier by the second.

“I had more fun being twenty in the seventies than I am being seventy in the twenties,” Walsh said.

Henley additionally commented on the state of the world.

“Our mission this evening is to give you about a three-hour vacation from all the chaos and turmoil that’s going on in the world,” he said.

Overall, the Eagles delivered on their promise of being an escape from the chaos and turmoil of the world, which for me mostly referred to my programming assignment that was due the following day. As I listened to a dad next to me explain Eagles lore to his teenage daughter, I realized how precious the Eagles were, and still are, to both young and old generations. While I didn’t grow up listening to them, unlike most concertgoers, their performance emphasized their timelessness. I can’t wait to introduce their music to my own kids one day.