The 2022 Rites of Spring experience: From Waka Flocka Flame to 2 Chainz

We experienced everything Rites-related, from deep-fried mac and cheese to calls and responses of “I Say Waka, You Say Flocka." 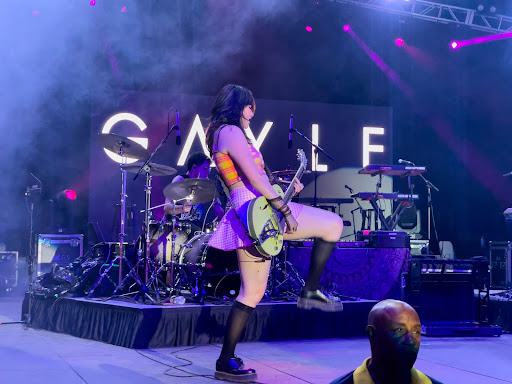 The view of the stage during Gayle’s set, as photographed on April 23, 2022. (Hustler Multimedia/Josh Rehders).

If the crowd turnout was any indication, the best way to spend the weekend of April 23 was at Rites of Spring, an annual event thrown by Vanderbilt Programming Board (VPB). The festival, which took place on Alumni Lawn, was a full-scale event with a massive stage set-up, photo opportunities and a plethora of delicious food trucks. Due to COVID-19 restrictions, VPB did not host the event in person in 2020 and held “Rites of Stream” online in 2021 featuring Zoom performances by Rico Nasty and Dominic Fike.

After a two-year hiatus, the event needed a big come-back. This year’s line-up positioned the concert series to do just that, with Dreamer Isioma, Waka Flocka Flame, 2 Chainz, Gayle, Blxst and the controversial Miguel. The sets were spread out over the course of Friday and Saturday evenings, with three artists performing each day. A staple of the Rites experience, there were food trucks serving hungry attendees from opening chords to encores, including Slim + Husky’s Pizza, Califarmia, Nashville Chicken and Waffles, The Inka Trailer, The Love Bus and Retro Sno.

Depending on the time and day that you went, the line to get in could have been no time at all or a 20-minute wait. Once in, though, the atmosphere of the festival was loud and lively. The mosh pit extended far out from the stage, and only trickled out around the middle of the festival grounds. Those areas closest to the stage were not fit for the weak. As a note to our future selves and any other naive attendees: do not wear open-toed shoes if you plan on residing in the mosh pit—your un-bruised feet will thank you later. The less-crowded areas of the festival grounds were home to concertgoers enjoying the night from the safety of their picnic blankets.

Each artist approached their performance a little differently. 2 Chainz dominated the stage with popular beats and back-to-back crowd favorites, such as “I’m Different,” “It’s a Vibe” and “Big Bank.” There were some complaints about the performance times being incongruous with the advertised set times, with YikYaks from the night including, “At this point, we might not even get 1 chain.” However, 2 Chainz arrived on stage unfazed, easing the crowd into chants with a plethora of his iconic hype lyrics.

Miguel offered a more intimate experience, often amusing the crowd with small anecdotes, a seemingly impromptu session on the bass and playing the more sensual songs he’s known for such as “Coffee,” “Adorn” and “Sky Walker.” Along with these legendary artists, Rites also provided space to some less familiar faces: Dreamer Isioma, Gayle and Blxst.

Dreamer’s set took us by surprise. A somewhat novice performer, he seemed cool, calm and collected as he worked through his most-played Spotify hits, such as “Chosen.” Gayle electrified the audience with her viral TikTok audio, “ABCDEFU.” Blxst, a California-based musician, might find himself to be a returning Rites artist like some of his counterparts, Miguel and 2 Chainz, as the crowd was energized by his smooth sounds and heavenly background vocals.  The crowd’s whistles and hoots seemed to make the confident performer grateful and shy, his thank-yous echoing as he exited stage left.

Despite the overall success of the event, some students expressed sentiments regarding the performers and how well-known they were among the student body.

“Miguel did a good job. He’s a good performer, but we just didn’t know him as a school, or at least most people around me didn’t know his songs,” sophomore Caleb Harrigan said. “He is very niche. It would’ve been better if they spent the money on one artist or two smaller artists on the first day and one bigger artist on the second day.”

Ultimately, Rites 2022 proved to be a satisfying return of performances following the event’s two-year hiatus. We can’t wait to see what another year in the books helps to pave the way for in the coming years, although hopefully with a little more crowd control.