Hold on to what we’ve got: Bon Jovi celebrates nearly four decades of making music on his 2022 tour

Bon Jovi’s tour ended with a bang at Bridgestone Arena on April 30. 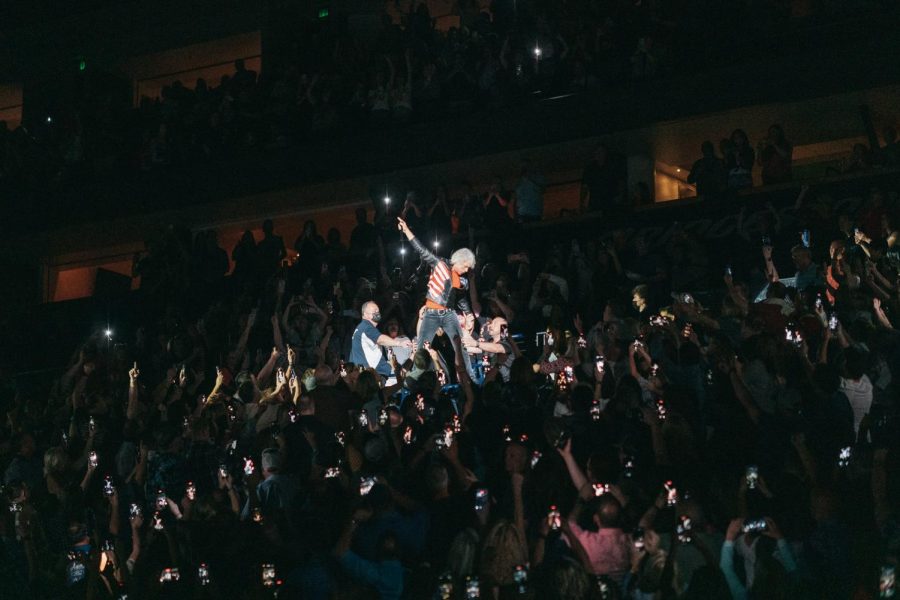 Before my tweenage self discovered the teenybopper heaven that was the discography of Selena Gomez and the Scene, my iPod nano was full of ‘80s classics, thanks to the careful curation of my father. On April 30, surrounded by middle-aged women having the time of their lives, I eagerly awaited my favorite Bon Jovi song, “Livin’ on a Prayer,” a classic I assumed would be played as the encore. However, the band decided to switch it up and made a setlist choice that they haven’t made since 2011.

When the stage lights came up on the members of Bon Jovi—including keyboardist David Bryan, drummer Tico Torres, guitarists Phil Xenidis and John Shanks, bassist Hugh McDonald and percussionist Everett Bradley—there was one important player missing. I turned to my neighbor, who said, “Where is Jon Bon Jovi?” As we soon discovered, the band’s legendary namesake entered from directly behind our section, pausing in the stairwell just 15 feet away from me to croon “Livin’ on a Prayer.”

While I’m no ‘80s baby, I was nothing short of reverent witnessing Jon Bon Jovi sing his greatest hit from a few arms-lengths away. Along with nearly 2,000 fellow concertgoers, I half-sang, half-screamed along about the fates of down-on-their-luck Tommy and Gina. It was one of those moments when you know that you’re beholding something you may never experience again.

After “Livin’ on a Prayer,” Bon Jovi made his way across the floor, working the crowd and jamming out to instrumentals. Once he reached the stage, the band sprang into “You Give Love a Bad Name,” another staple I recognized from my faithful iPod. Other notable songs included  “The Radio Saved My Life Tonight;” “Keep the Faith,” during which the band brought out maracas; and “Who Says You Can’t Go Home,” a fantastic choice for the closer.

“I’m telling you this story because it doesn’t matter if it’s a half a world away, across borders, language barriers or, in fact, even decades since that song was out,” Jon Bon Jovi said. “The common thread is humanity. People half a world away and us have much more in common than we do differences.”

After this poignant message, the band launched into “It’s My Life.”

At age 60, Jon Bon Jovi is still a total rockstar. Though he declared to the crowd that “I’m too old for this sh*t,” his performance proves otherwise. Throughout the show, he rarely stood still, jumping around the stage, interacting with the audience and doing what could best be described as jazz hands above his head. It’s safe to say that he was having the time of his life on tour.

Bon Jovi’s wardrobe screams “rockstar” as well. He started off the show in an American flag-print leather jacket, before changing into a leather shirt with a bold zippered V-neck about halfway through the show. For the encore—which lasted a thorough half-hour—he changed into yet another leather get-up, this time with a blue tank top underneath.

Though minimal, the set was fitting for a rock concert. Metal towers with attached lights moved up and down, giving the stage an industrial feel and shining small spotlights all over the crowd.

As the concert ended, the band came back out for not one, but two encores. During the first, they played “Wanted Dead or Alive” and “Bad Medicine,” before ending the show—and their 2022 tour—with “I’ll Be There for You.” Indeed, Bon Jovi has been there for their fans for nearly four decades, just as Bon Jovi fans have been there for them. Jon Bon Jovi concluded by expressing his gratitude for his fans’ support since 1983, which has helped to give the rock band their uniquely long career.