After allowing just six runs through the first two games, the Commodore bullpen gave up 12 runs on Saturday, leading to a tough series loss to the Aggies. 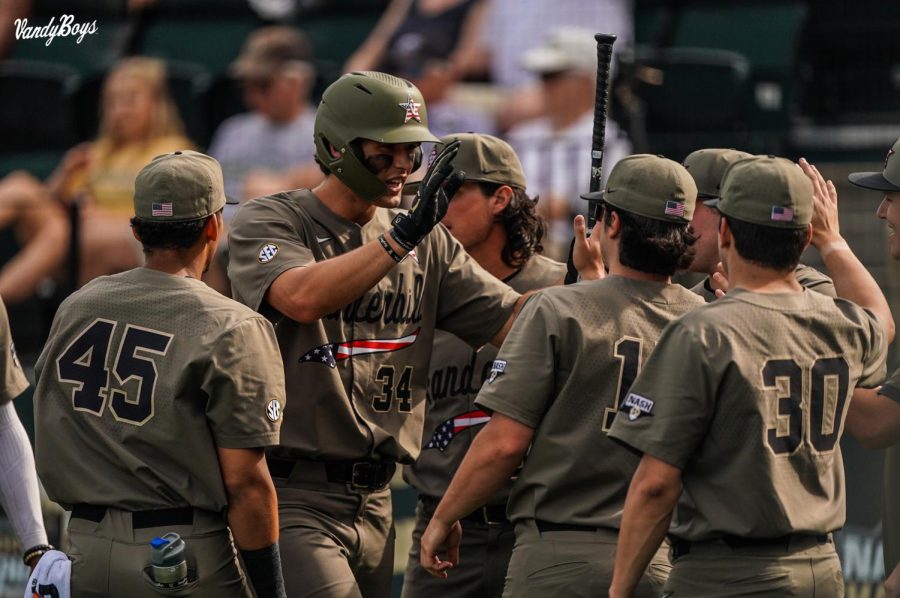 After a one-run outing on Thursday and an 11-run showing on Friday, Commodore fans had no idea what to expect for the deciding game of this SEC series. Surprisingly, it was the defense that really struggled, giving up 12 runs—the most in any single game this entire season. Vanderbilt lost the matchup, 12-4, and dropped the series in the process.

Freshman pitcher Bryce Cunningham got the mound call for the Commodores, his third straight series-finale start. However, the righty only went 1.2 innings, picking up three strikeouts and allowing four walks and six runs.

Texas A&M started the game quickly, loading the bases with two walks and an Austin Bost single. With two outs and two strikes on the count, graduate catcher Troy Claunch smacked a line drive to right-center field and batted in two runs for the Aggies.

The Commodores responded immediately. Enrique Bradfield Jr. led off with a walk and was moved to second by a Spencer Jones groundout. With Bradfield Jr. in scoring position, Dominic Keegan snuck a ball between the shortstop and third baseman to bring the sophomore home. Then, Calvin Hewett took Aggies pitcher Brad Rudis’s first offering for a ride, launching a two-run shot over the left field wall. The home run lifted the Commodores above the Aggies, 3-2.

The slugfest continued. Cunningham walked the first batter of the inning once again. After that, the flood gates opened. Texas A&M’s offense produced four hits and a walk in the next seven batters, driving in four runs in the process.

Cunningham’s day ended there. Head coach Tim Corbin pulled the first-year in favor of junior Nick Maldonado. However, with a runner on third, Maldonado inherited a dangerous situation. He was unable to work out of the stretch, giving up a single and pushing the Aggies lead to 7-3. He struck out the next batter and relieved the home side for the time being.

Before Vanderbilt could do any more damage, the Aggies made a pitching change, swapping Rudis for the southpaw Joseph Menefee. This proved to be extremely effective, as the Commodores were held scoreless for the next four innings. In fact, the side could only produce a single and a walk during that stretch.

On the other side of the diamond, Maldonado’s entrance patched the leak for a few innings. The veteran got seven straight batters out, collecting four punch-outs in the process. However, trouble came with the fifth. Maldonado gave up a single to the first batter, and then, sophomore Ryan Targac sent a ball over the right field wall and into the parking lot behind Hawkins field. The two-run homer gave Texas A&M a commanding 9-3 advantage.

Before the top of the sixth, Maldonado gave way to Nelson Berkwich on the mound. The lefty would allow a double and a walk in the inning but found a way to work out of the pickle and leave two stranded.

In the bottom of the frame, Vanderbilt’s offense started to wake up. Jones and Keegan led off with back-to-back walks and advanced one base each with a wild pitch from Menefee. Tate Kolwyck then drove a run in with a grounder to A&M’s shortstop. Kolwyck would reach base on an error, as the first baseman’s foot was off the bag when the catch was made. Freshman Davis Diaz followed this sequence up with a walk, loading the bases with two outs and Carter Young up to bat. Unfortunately, Young’s slump continued. The junior struck out swinging and left three stranded.

Donye Evans would then enter the contest to relieve Berkwich of his duties after just one inning. Evans would also only pitch for one frame, but he didn’t allow a run and picked up a strikeout in that period. Grayson Moore would replace Evans.

Moore started the eighth strong with two early strikeouts, but with two men on base thanks to a walk and a single, Targac stepped up to the plate. The sophomore already had one booming home run to his name on the day. But, somehow, Targac topped his first moon shot. This rocket headed straight over the center-field monster and landed about 450 feet from its launch point. For the first time this year, Vanderbilt allowed more than 10 runs in a single game. The score was now 12-4.

Moore came out for the final frame, giving way to Jack Anderson. The graduate pitcher struck out two in an efficient 1-2-3 inning.

Offensively, the Commodores were unable to produce any more runs in the last three innings. Pitchers Menefee and Will Johnson stranded five runners during that time.

“We’ve got some sorting out to do,” Corbin said. “We’ll just figure out what’s best for our team.”

For Vanderbilt, the problems from the bullpen are new. Pitching has been this squad’s strength, and losing a series because of poor performances from the mound is a tough pill to swallow. Still, everyone has bad games, and this Saturday was certainly one for the VandyBoys.

Both the offense and defense will look to rebound this Tuesday, May 3, as Vanderbilt takes on Louisville at 6 p.m. CDT at Hawkins Field.