Behind 11 hits and a scoreless five innings from Carter Holton, the VandyBoys earned themselves a chance at another SEC series win with a victory on Friday. 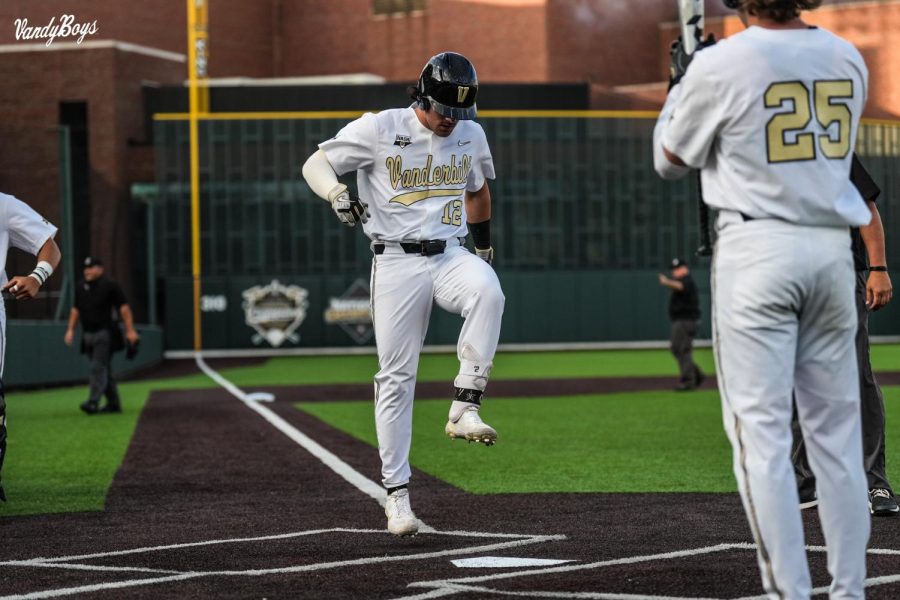 On a beautiful evening under the lights at Hawkins Field, the VandyBoys (29-12) strung together a dominant nine innings of baseball to defeat the No. 21 Texas A&M Aggies (26-15), _- _,  in Game 2 of the weekend series. After scoring just one run on five hits in Game 1, head coach Tim Corbin’s squad totaled 11 hits with three Commodores registering multi-hit games. Dominic Keegan led the charge, going 3-for-5 with two RBIs and raising his batting average back above .400.

Despite not naming a Friday starter during the week, Corbin once again turned to freshman Carter Holton (W, 5-3) for a Game 2 start. The southpaw turned in one of his best performances of the season, blanking the Aggies in five innings of work.

He got tremendous run support from his teammates behind him, as the VandyBoys scored runs in each of the first four innings, giving Holton a seven-run cushion after four innings. The freshman took that cushion and used a fastball topping out around 95 MPH to rack up seven strikeouts in his five frames. He allowed just four hits and claimed his first SEC win since March 19 against Missouri.

“Letting the defense work behind me was the biggest thing. Just in the big situations they made plays behind me,” Holton said. “Resetting myself after I walked a couple of people and just getting back in the zone was key.”

On the other side, Aggies starter Micah Dallas (L, 4-3) was roughed up from the start. The righty went just four innings and surrendered eight hits and seven earned runs, and the VandyBoys wasted no time jumping on him.

The onslaught began in the first when Spencer Jones matched Vanderbilt’s run total from Thursday night’s loss with a solo home run to kick off the day. His seventh dinger of the year was followed quickly by Keegan’s eighth of the year, as back-to-back solo shots got the VandyBoys rolling.

They struck for three more runs in the second thanks to some small ball and their third solo homer of the game. Both Calvin Hewett and Tate Kolwyck got on base to start the inning and ended up crossing home via passed balls while Enrique Bradfield Jr. was at the plate. One pitch after Kolwyck scored, Bradfield Jr. took Dallas deep to right field for his fifth homer of the year and Vanderbilt’s fifth run of the game.

Hewett kept the VandyBoys momentum going in the third, slapping a single to right field to score Keegan and put the hosts up 6-0. Bradfield Jr. then scored his second of three runs in the game on an RBI groundout from Jones.

Texas A&M added their only run of the game in the sixth inning courtesy of a Jordan Thompson sacrifice fly, but a leadoff triple from Bradfield Jr. in the home half allowed Bulger to get that run right back with a his own sacrifice fly, pushing the Vanderbilt lead back to seven. A Kolwyck double scored Hewett in the seventh and Keegan’s third hit of the game, a triple, scored Jones in the eighth. Keegan eventually came around to score to make the score 11-1 and more than seal the deal for Vanderbilt.

Christian Little finished out the final four innings on the mound, allowing just one run and striking out five Aggies in the process. Little has surrendered just three runs in his last 15 innings of work.

“[That was] good for him because he just needed to get some length,” Corbin said of Little’s four innings. “I think once his adrenaline calmed down after that first inning, I thought he settled in nicely and threw three or four pitches for strikes—it was good. It was really good and that’s good for him. It’s good for us.”

The VandyBoys will look to take their third consecutive SEC series on Saturday with first pitch set for 2 p.m. CDT.