The Vanderbilt Commodores struggled at the plate in a Thursday night clash against No. 23 Texas A&M, losing 5-1. 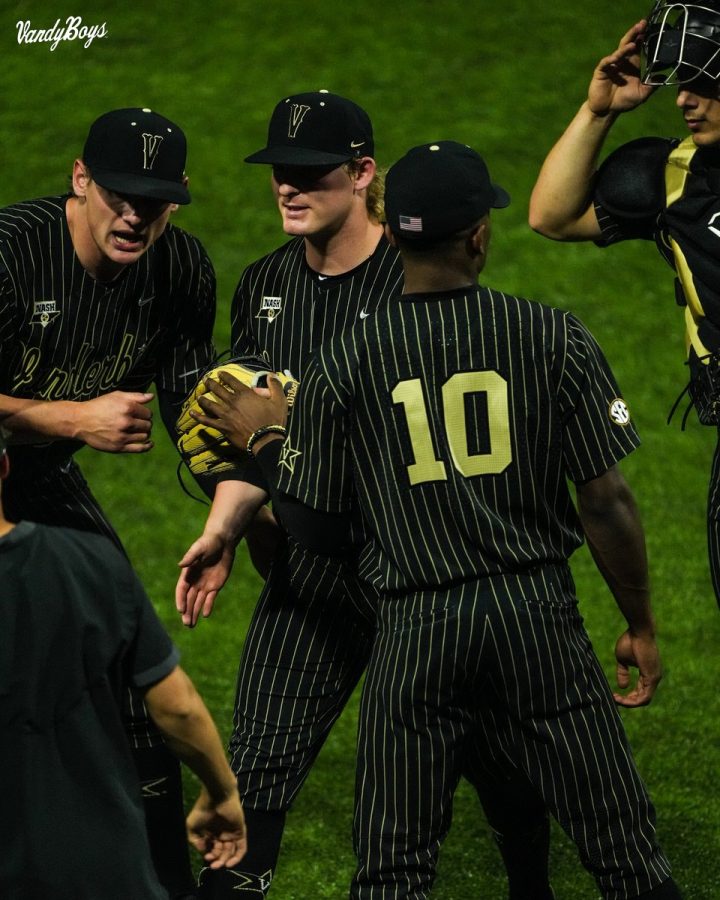 Texas A&M’s Kole Kaler led off the game with his first home run of the season to put the Aggies up 1-0. The VandyBoys responded in the bottom of the first after Enrique Bradfield Jr. walked to lead off the inning, stole second and scored after two straight groundouts.

Other than the early homer, McElvain kept the Aggies off the board in the first few innings. He pitched perfect second, third, and fourth innings, but still needed 76 pitches to get the first 12 outs. McElvain’s mix of speeds and locations got the junior six strikeouts in the first three frames.

The Commodores threatened in the bottom of the fourth after Spencer Jones reached on a throwing error and Dominic Keegan walked with no outs. Parker Noland flew out on a 1-2 count after attempting to bunt, Calvin Hewett grounded into a fielder’s choice and Tate Kolwyck struck out to strand the two Commodore baserunners.

McElvain walked the first two Aggie hitters in the top of the fifth. After a single by Trevor Werner, the visitors retook the lead. Texas A&M had the bases loaded after a sacrifice bunt and an intentional walk, but the Commodores were able to limit the damage to keep the score 2-1.

After throwing 99 pitches through five innings, McElvain exited the game. Despite recording a solid start that featured 2 hits, 7 strikeouts, and 2 earned runs, McElvain was unable to work deep into the game due to persistently long counts.

“You’ve got to give them credit too because five or six times, they got past eight pitches,” head coach Tim Corbin said. “They’re tough to put away. When you get to two strikes, they fight, they battle you.”

Sophomore Patrick Reilly came out of the bullpen for his 11th appearance, the eighth time in relief. Brett Minnich singled and took second on a wild pitch before scoring on a line drive into center by Troy Claunch.

Vanderbilt’s offense struggled against Dettmer in his seven innings of work. Dettmer improved as the game progressed, as the Commodores were 0-for-15 in his second and third times through the order. Overall, the visiting starter allowed just 1 earned run on 2 hits in his 104-pitch outing.

“[Dettmer] throws a power sinker and he throws it into the ground,” Corbin said. “He did it to Arkansas last week and he slowed us down. You’ve got to give it to that kid, Dettmer’s a good pitcher.”

With two outs in the bottom of the eighth, Jack Bulger and Jones notched back-to-back singles to keep the inning alive for Keegan. Keegan popped out in the infield to end the threat.

Reilly pitched well through the eighth inning to keep the Commodores in the game. However—after the Aggies loaded the bases in the top of the ninth—he was replaced by lefty Brett Hansen. Reilly struck out 3 batters and allowed 4 hits, 3 walks and 3 earned runs in his appearance.

A sacrifice fly and a double by Austin Bost extended the visitors’ lead to 5-1 before Hansen was replaced by Jack Anderson. Anderson got a groundout to end the inning.

Freshman Davis Diaz pinch hit for Noland to lead off the bottom of the ninth and singled to center. The next three Commodores went down in order to secure the win for the Aggies. The Commodores finished the night with just one extra-base hit and one run, falling below .500 in SEC play once again.

Game 2 of the VandyBoys’ series against the Aggies will be tomorrow night at 6 p.m. CDT. Corbin again declined to name a starter.