Men’s Tennis: Vanderbilt falls to Alabama in first round of SEC Tournament

The 12th-seeded Commodores were upset by the 13th-seeded Crimson Tide, 4-3, in the first round of the SEC Tournament held in Athens, Georgia. 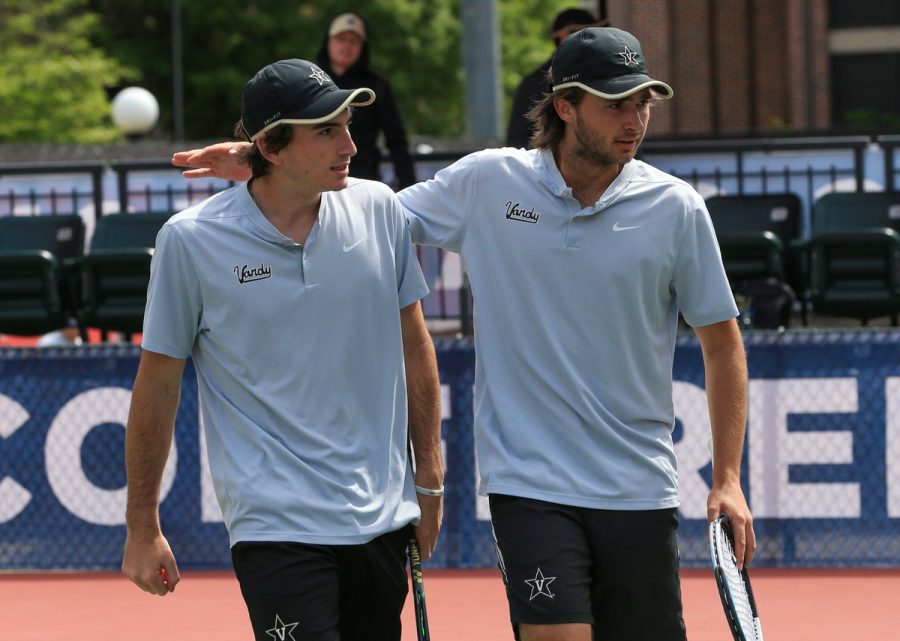 Michael Ross and Jeremie Casabon during the Commodores match against the Alabama Crimson Tide in the first round of the SEC Tournament on April 20, 2022. (Vanderbilt Athletics)

On Wednesday, April 20, the 12th-seeded Vanderbilt Commodores (14-12, 2-10 SEC) were upset by the 13th-seeded Alabama Crimson Tide (9-21, 0-12) in the first round of the SEC Tournament, 4-3. As a team, the Commodores are ranked No. 57 nationally but will likely fall short of qualifying for the NCAA Tournament held in May, ending their season.

The duos of Michael Ross and Jeremie Casabon, as well as Ross and Siim Troost, each won their respective matches against the Crimson Tide to secure the doubles point for the Commodores. Fifth year Max Freeman then continued the momentum for Vanderbilt, winning his singles point and putting the Commodores ahead, 2-0. The Tide then regained control, winning three straight singles points to pull in front, 3-2.

Vanderbilt’s senior Macsen Sisam tied the match at three apiece after winning his match, before No. 33 George Harwell lost a heartbreaker to Juan Martin of Alabama in three sets, sealing the 4-3 victory for the Tide.

“We’re hugely disappointed,” head coach Ian Duvenhage said. “Our season started very promising—we were 11-1 in our nonconference schedule. We played a lot of good matches and beat some good teams. Bottom line, though, is that we finished the season badly.”

Despite starting the season 11-1, Vanderbilt dropped 11 of its last 14 matches. The Commodores also defeated the Crimson Tide, 4-3, earlier this season in a home contest on March 27.

While the season ended in disheartening fashion, the Commodores flashed their true potential at times. They clobbered No. 29 Northwestern, 6-1, at home back on March 9 and nearly upset three teams ranked nationally in the top 10.

Vanderbilt narrowly lost to No. 5 Tennessee, 4-3, at home on April 10 on Senior Day. It seemed as though the Commodores had positive momentum to close out the season, but they still dropped their final three matches.

On a positive note, the Commodores will welcome three talented freshmen to campus next season: Nathan Cox, Paul Wang and Mitchell Deames. In addition, seniors Marcus Ferreira and Macsen Sisam are likely to return for their fifth year.

“We’re gearing up for improvements for next season,” Duvenhage said. “The core of a good group is returning, and with some new faces coming in, it’s tough to predict how they’ll adjust, but we’re ready for the coming year.”