The Commodores were unable to pull off a program-defining upset, but head coach Aleke Tsoubanos is proud of her teams’ fight. 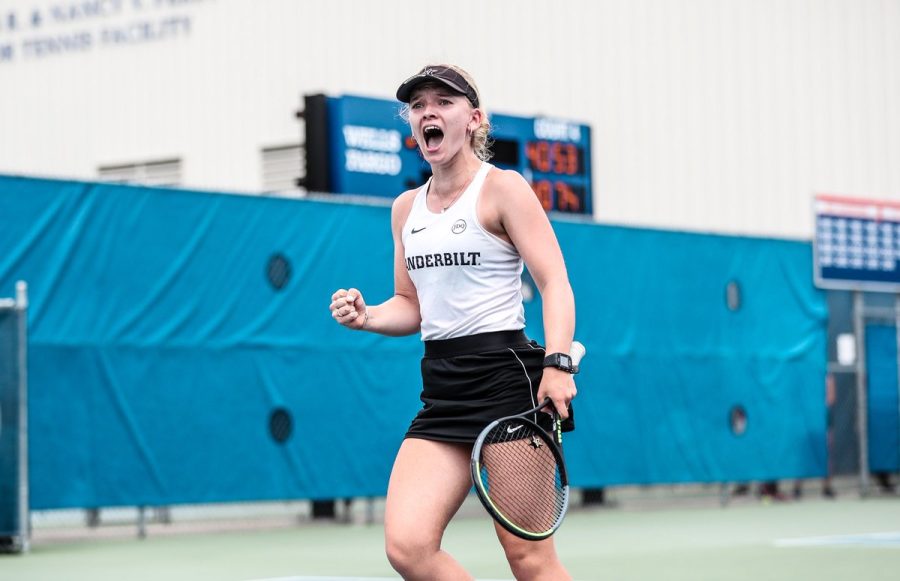 After a strong finish to the regular season, No. 31 Vanderbilt traveled to Gainesville, Florida, to compete in the SEC women’s tennis tournament. The Commodores (16-9) dominated in the first round of the event, beating Ole Miss 4-2. Following a convincing first round, they fell to the No. 6 Texas A&M Aggies 4-2 in the SEC quarterfinals.

“Over both matches in Gainesville, I was really happy with the way we competed as a team,” head coach Aleke Tsoubanos told The Hustler. “We are a more confident team now in late April, and I think we have positioned ourselves well to earn a bid to the postseason.”

The Commodores started the SEC Tournament on a tear, snatching the doubles point from the Rebels in swift fashion. Vanderbilt’s Anna Ross and Holly Staff—the 40th-best duo in the nation—paired up to take Court 1, defeating their opponents by a 6-1 margin. Vanderbilt clinched the doubles point a few moments later on Court 2, thanks to Marcella Cruz and Anessa Lee defeating Ludmila Kareisova and Kelsey Mize, 6-4.

“Holly and Anna were a preseason top 10 team, and they are capable of being one of the best doubles teams in the country,” Tsoubanos said. “They have great energy together, and when they are serving well and setting up each other from the backcourt, they can be hard to stop. I would love to see them get a shot in the individual tournament.”

The Rebels struck first in singles with a win on Court 1, where No. 48 Sabina Machalova bested No. 41 Ross in two sets. Vanderbilt and Ole Miss traded the next two points, as Vanderbilt’s Dasha Kourkina defeated Lillian Gabrielson on Court 5 and Ole Miss freshman Rachel Krzyzak defeated Yufei Long on Court 4.

With the match tied at two apiece, Staff understood that a win on Court 2 would be a much-needed momentum booster for the Commodores. After taking the first set, 6-2, she fell in the second set, 6-3. Staff ultimately won her third set, 6-4, giving Vanderbilt a 3-2 lead. Following Staff’s gritty performance, all eyes turned to Court 3, where Lee clinched the match-winning point in a three-set duel (7-5, 3-6, 6-1).

“We zoned in on playing a committed match against Ole Miss knowing some of the matchups would be the same in both singles and doubles,” Tsoubanos said. “Dasha put a point on the board quickly for us, and Holly and Anessa were just outstanding closing out their third sets.”

After defeating Ole Miss on Thursday, the Commodores clashed with Texas A&M on Friday. The morning started as a hard-fought battle between SEC foes, but the Aggies struck first. On Court 3, MaryAnn Rompf and Dasha Kourkina were unable to overcome an early 5-0 deficit, ultimately losing 6-2. On Court 1, Ross and Staff were unable to take down Jayci Goldsmith and Tatiana Makarova—the third-best doubles tandem in women’s college tennis.

The Aggies carried their momentum from the doubles courts to the singles courts, capturing wins on Court 2 and Court 1 to force Vanderbilt into a 3-0 hole. With their backs against the wall, the Commodores resiliently fought back and won two consecutive matches. Kourkina definitively took Court 5 and Amy Stevens captured Court 6 soon after. Trailing the Aggies 3-2, all faith was put in Vanderbilt’s Cruz. She lost her first set, 6-4, and was locked in a 6-6 tiebreak in her second set. She looked to force a game-changing third set but ultimately dropped the set, 7-6(4).

“Texas A&M is a very, very good team, and their record reflects just that,” Tsoubanos said. “We have come a long way from our matchup in College Station in mid-March. We were in a great position to get to third sets on the final two courts and came up just short.”

“We’ve taken a few days off to rest and recover,” Tsoubanos said. “We will focus on more doubles work and try to get a little sharper on offensive execution and limiting loose errors. If we can continue to work on the practice court and fight in matches the way we have in the past four weeks, I like our chances in the NCAA Tournament.”