‘I Disagree’ with you missing a Poppy concert, even on a Tuesday

Poppy’s performance shook the walls of the Brooklyn Bowl. 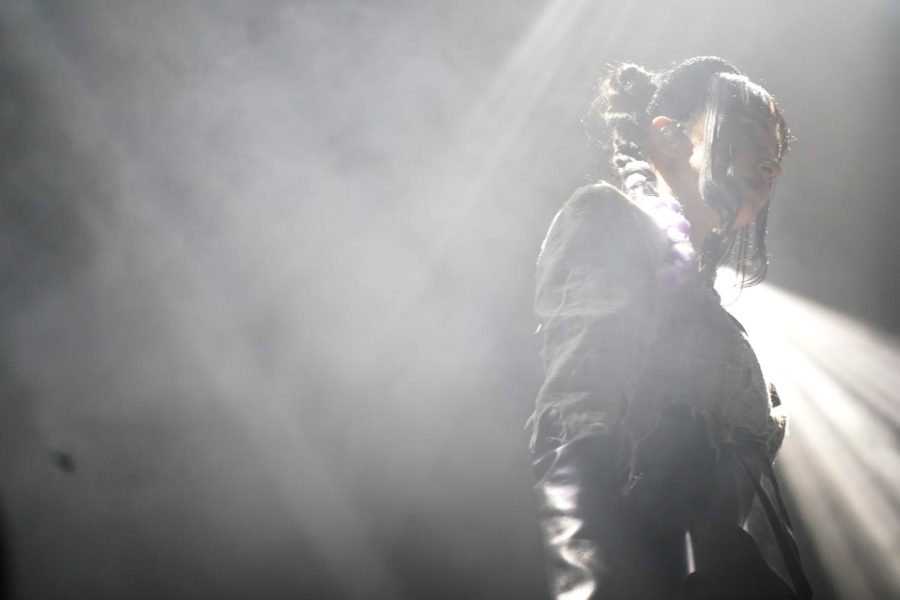 Tuesday nights are usually pretty slow; the week has just started, homework is picking up and the vibes are still down. I decided to beat back the Tuesday doldrum on April 5th by booking it to the Brooklyn Bowl to see alt rock superstar Poppy.

A Nashville local, Poppy is primarily known as  a singer-songwriter, but for those of us who spent too much time online in the 2010s, she was once a YouTuber. Poppy’s videos can only be described as surreal, with titles such as “Me Eating a Banana” and “Ahhhhh.” Her videos are as surreal as their titles: Poppy stands in a solid white room (called her “void” by her fans) and talks in her signature soft, airy voice about whatever she wants. The videos are usually around a minute long, but they are each an experience that feels much longer.

She began her music career in 2017 with her album “Poppy.Computer” and has released three other albums, her most recent being “Flux.”  Poppy’s music ranges from softer art-pop to much harder alt-rock that pushes into heavy metal. Her songs don’t fit into one mold: she sings about gender identity and life in the public eye, but does so in a way that is uniquely Poppy.

Her opener, rap and metal artist MZ Neon hyped up the crowd with a stellar performance. Following the opener, more fans poured into the venue and waited in anticipation. After the sixth time listening to the Hamster Song, Poppy came on stage. The floor and balcony were filled with adoring fans all headbanging along to her hits.

One of my favorite songs she performed was, “I Disagree,” the title track from her 2020 album. The song is a message to the music industry. Poppy disagrees with the way that the industry pressures her and is failing to make her happy. This song blends Ricky Tillo’s headbanging guitar riffs with Poppy’s high vocal register to encapsulate her journey into heavy metal. Seeing it live was a spiritual experience, with the crowd chanting “Watashi wa anata ni dōi shimasen” (meaning “I do not agree with you” in Japanese) raising the energy for Poppy as she screamed the lyrics. Later in the show, Poppy slowed things down with “Hysteria.” A throwback to her more mellow era, it gave the crowd a chance to catch their breath before diving right back into the intense set.

Any Billie Eilish fan needs to listen to “BLOODMONEY.” To me, an avid Billie and Poppy fan, this song reminds me of Eilish’s first album, ”When We All Fall Asleep Where Do We Go?”. The chilling message to “go beg for forgiveness from Jesus the Christ,” being repeatedly screamed by and at the audience drew everyone into a trance, held in the palm of Poppy’s hand.

Artists doing covers at their own concert can sometimes miss. In Poppy’s case, however, she did the song justice and in a way made it her own on “All The Things She Said.” The original song gained some popularity as a sound on TikTok, but there was no TikTok dancing anywhere near the stage this night.

Overall, this was one of the best shows I’ve been to: the lighting, crowd interactions and the general vibes were immaculate. I definitely recommend anyone who likes harder music to go to a Poppy concert, and I will definitely be seeing her live again.