Lights on the Lawn rescheduled for September 2022 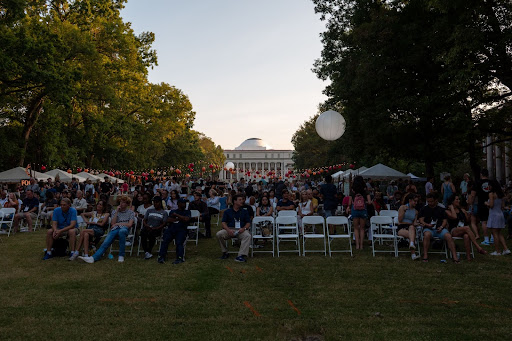 Fall for the Arts, as photographed on Oct. 2, 2021. (Hustler Multimedia/Josh Rehders)

Lights on the Lawn (LOTL) has been postponed from April 16 to September 2022 due to religious conflicts and contract negotiations, per a March 30 Instagram post.

Junior and LOTL President Shea Gordon explained that the event is important to the student body and the Mary Parrish Center (MPC), which is why they wanted to make the event’s scheduling more inclusive.

LOTL is a student-run philanthropy organization comprised of IFC fraternity members committed to supporting the MPC, a transitional housing nonprofit for survivors of sexual and domestic abuse.

“MPC helps survivors get back on their feet after living through detrimental relationships,” LOTL’s AnchorLink page reads. “The organization achieves this goal primarily through the planning and execution of an annual on-campus concert, from which all profits are donated to the Mary Parrish Center.”

Past headliners for LOTL include Quinn XCII, Diplo, Louis the Child, the Chainsmokers, Two Friends and Gryffin.

“The only date that was available for the artist we were communicating with was on a night of Passover, and we felt that was unfair to a large portion of the Vanderbilt community, and the general lack of availability and contract issues with the artists we were speaking to,” Gordon said.

Although he expressed that the LOTL planning committee is saddened to not be able to have a concert this semester, Gordon said the extra time will help them improve the quality of the concert and raise more money. He also acknowledged that students might be disappointed by the change, but said the lineup for the concert will not be changing despite the rescheduling.

First-year Faeid Hassan said he would have preferred the concert to have been this semester rather than in Fall 2022.

“It would be really nice to have an event now rather than having it be rescheduled later because it would allow the students to destress for finals,” Hassan said.

Similarly, senior Katherine Wiesbrock expressed that she was let down when she heard the event was postponed, especially as she will be graduating in May. However, she said this change was not surprising to her given past short-notice scheduling changes with LOTL.

“I am a little disappointed that it was canceled but also not surprised,” Wiesbrock said.

Another senior Rose Litt shared that the Rites of Spring concert series, which will be occurring on Alumni Lawn from April 23-24, helped make up for LOTL being canceled.

“Obviously, a lot of the seniors were looking forward to [LOTL], considering it normally happens in the fall, and the last one we had was Quinn XCII sophomore year,” Litt said. “LOTL is less about having a big name and more about just having a fun lowkey concert on campus for a good price.”

Gordon spoke on the changes, declining to explain how many or which artists would have been performing at the originally-scheduled LOTL.

“The lineup is not changing—still likely just going to do one major artist,” Gordon said. “The lineup will most likely be announced sometime this summer, and there are still a few possibilities, so we don’t know who the major artist is yet”

Per Gordon, even though LOTL is set for next semester, the LOTL committee is planning other fundraisers to benefit the MPC this semester.

“We’ll be hosting some events at the end of this semester and beginning of next to support the Mary Parrish Center and their mission to support survivors of interpersonal violence,” Gordon said. “The best way for individuals to support is to attend and help spread the information they learn through the Vanderbilt community!”