KUMAR: Why I don’t believe in diversity and inclusion

Accepting students of diverse backgrounds to elite institutions only to subsequently subject them to physical and mental violence once admitted is not a policy that should be praised. 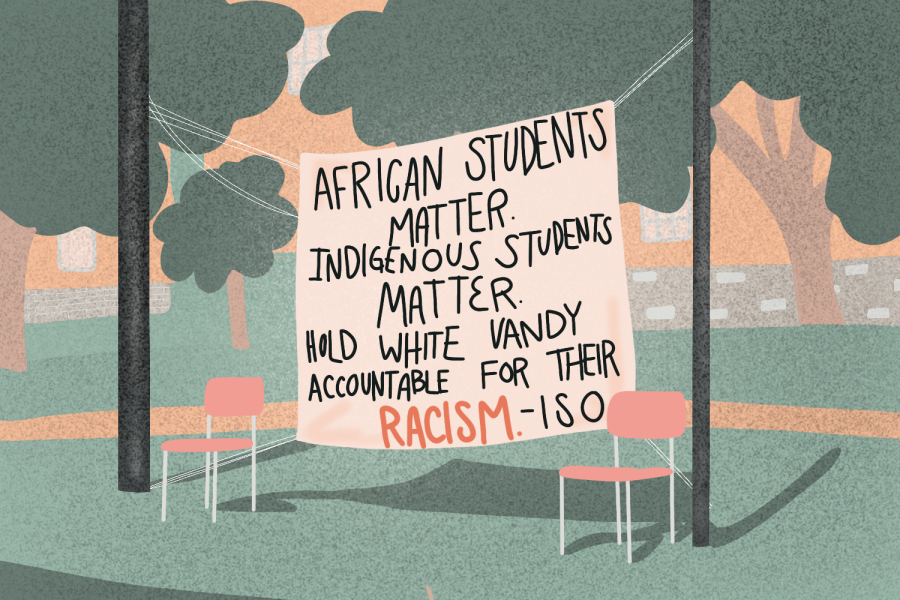 Editor’s Note: This piece contains a brief mention of suicide and sexual assault.

As a rising high school senior from Arizona, I visited Vanderbilt ready to experience the realities of racism I had heard so much about in regard to the American South. Nashville itself was nothing like what I had expected. The city certainly lives up to the stereotypes of being a patron of country music, as well as the more negative stereotypes. I could not ignore the fact thousands of unmasked people milled around during the pre-vaccine height of the pandemic. Yet, the city’s extensive comfort food offerings, Southern hospitality and vibrant minority communities made it easier for me to adjust to any regional culture shock. Vanderbilt itself, however, was far from the “safe haven” from the discrimination I was told it would be.

Many faculty members have recounted to me that Vanderbilt only recently acquired its identity as a competitive national school, like its southern elite peers Rice University and Duke University. This “nationalized identity,” was the result of extensive diversity and national outreach measures implemented by our former Chancellor Nicholas Zeppos. The implementation of such outreach strategies did not exist in a vacuum, though, as Chancellor Zeppos realized that students being brought to Vanderbilt from across the country were not enough. After hearing out student demands, the chancellor worked to make substantial changes to university policy, introducing programs such as Opportunity Vanderbilt and “creat[ing] the role[s] of vice chancellor for equity, diversity and inclusion and chief diversity officer”. These were not simply empty calls for diversity measures, there was a clear financial commitment that underlaid and thus substantiated the desire to make the university look different.

Zeppos’s approach to hearing out students and responding appropriately seems to differ from our current chancellor’s by a wide margin. From refusing to read a simple land acknowledgment before speeches to ignoring student calls for divestment on campus, Chancellor Daniel Diermeier has taken an approach that can only be described as total animosity towards student calls for change.

Chancellor Diermeier formerly taught at the University of Chicago, an institution known for its reputation as a bastion for free speech. He has long called for open dialogue to be respected on campus, whether in his Founder’s Walk speech or in statements responding to conflicts where African and Indigenous students report being subject to name-calling and racist stereotyping by their peers. However, in the chancellor’s efforts to make Vanderbilt like its peers, he fails to recognize that our peer institutions from his former, UChicago, to Harvard also make significant financial contributions toward perspectives of those on the margins that challenge the status quo.

Chancellor Diermeier’s ethos of union-busting and his attribution of American governmental systems to economic success ignores histories of colonialism and violence that make these successes possible. This ignorance has prevented our chancellor from acknowledging critiques of structural inequality. This ignorance lets him brush off critiques as the result of “ideological echo chambers” rather than a result of the real experiences of students and well-documented histories. This worldview is infinitely reproduced in his approach to responding to student demands and concerns. When issues are brought up by marginalized groups, they are reduced to ideological antagonisms that are disruptive to the Vanderbilt learning community. It is clear that, at Vanderbilt, those in power don’t take criticism seriously, nor do they see the generative value of such criticism.

Leaders of our peer institutions see activism, advocacy and student demands as a manifestation of healthy political discourse. Diermeier’s limited worldview leads him to see student responses to university policy and scholarship as an impediment to the very form of free speech he claims to worship.

On this campus, free speech from those who oppose the status quo is often met with immediate obstacles from police presence to protests, ignoring credible allegations of sexual assault against faculty members, directed violence, slurs on anonymous platforms such as YikYak and death threats. In the long term, the administration responds with policies like the new free speech guidelines, which, in a rather Orwellian manner, encourage students to register their protests and debrief with the administration after any direct action. Effectively, this change will stop a huge amount of protesting, as students won’t be able to respond immediately to problems that arise and, instead, will have to go through additional bureaucracy. Meanwhile, when students bring to administrators’ attention that at supposedly dialogue-opening events they hear that  “the Aztecs ate babies,” nobody is ever reprimanded, much less deprived of their membership in student organizations or, God forbid, suspended for racist behavior.

As my labor history professor, Dr. Jefferson Cowie, aptly put it during a discussion of labor organizing: What does freedom of expression mean in a situation loaded with power? Who gets to speak freely is almost always qualified by restrictions on those who dare to challenge the natural order of things. Anyone can say anything, including hate speech and spout historical inaccuracies, but if students dare to call out white students’ racism, they threaten the school’s reputation. Institutional criticism hurts admissions, disrupts tours and so on. Rules are then formulated by administrators to curtail free speech, and students can no longer express their concerns. Without institutional backing or the ability to protest, marginalized students are left with no alternatives through which they can make their concerns heard.
This tension comes after a year of two Black women in the undergraduate student government. This year was the first time that students of color were finally able to express their demands. The backlash from our community leaders and fellow students clearly demonstrates that no one on this campus cares for students of color as we ourselves do.
The administration’s refusal to hear our demands requires marginalized students to take matters into our own hands. In my first year, Carlissa Arrow, Vanderbilt School of Engineering alumnae and current Brown School of Design student, and I co-founded Student Basic Needs at Vanderbilt, a student-run collective responding to student needs. When it snowed last year and Vanderbilt refused to help disabled students attend classes or acquire meals, we were the ones that threw together an Excel sign-up sheet of students who may be willing to bring disabled students meals as necessary.

Diversity and inclusion measures without built-out networks of support for marginalized students will simply offset the actual work of changing structural problems onto students themselves. Rather than creating a safe environment for students, it puts the onus of changing unjust policies and initiating cultural dialogues onto those that are already being dehumanized.

This kind of problem-solving is necessary for survival at a university that reels in students from “diverse backgrounds” or those who are passionate about social justice with financial and merit-based scholarships, only to then exploit them for the purpose of brochures and pictures.
Rarely do the students Vanderbilt recruited for their commitment to diversity and inclusion get their hard work featured on the official Instagram page or receive awards. Instead, these students work in campus jobs, do unpaid organizing work and finish classwork in the little time they have left.
Meanwhile, a new brand of thinking that I choose to call “sorority liberalism” has taken over the school. Fraternity and sorority members reposting infographics declare their support for social causes while refusing to show up to protests led by students of color when issues do not impact them. This is not just limited to sorority members or even just to white students. The socioeconomically privileged sects of this campus, regardless of race or Greek life membership, seem never to show out for their marginalized counterparts, regardless of their professed ideological commitments or learnings in discussion-based seminars.

“Once again I am blaming a problem within Vanderbilt’s student body on the lack of financial diversity here,” wrote former Hustler opinion editor Miquela Thornton in a Twitter post. “This is what happens when the majority of the student body is rich-but-doesn’t-think-so regardless of how racially and ethnically diverse the campus is.”

The same inaction applies to many of my social science and humanities professors, who spend hours lecturing us on the importance of racial inclusivity and social justice while overlooking the issues wracking the very student body they are teaching. Both of these groups also seem to ignore the struggles of the staff that clean their bathrooms and serve their food in dining halls.

The diagnosis of this problem is simple. Diversity and inclusion currently is an empty call for the student body to look racially diverse, without accounting for the violence that attending Vanderbilt might subject them to. Dr. Brooke Ackerly, professor of political science, said the following when asked what the future of such strategies at Vanderbilt should look like: “diversity, equity, and inclusion initiatives should not be merely backward-looking to correct mistakes and oversights of the past, but rather look forward to how to bridge epistemic gaps and include people in discussions.”

For too long, diversity and inclusion at Vanderbilt has meant bringing in students from across the country only for them to be subjected to constant threats and harassment.

It is the social justice-minded students who are recruited by the university precisely for this perspective who face the most backlash from privileged students.

Simply placing us in a violent and harsh environment among insensitive peers, without proper culturally sensitive mental health resources readily available to us, financial compensation, recognition for our work, healthy meals and more, is an exercise in violence.

The violence being perpetrated is not just physical or verbal; the mental health of students of color has been under attack as they are forced to balance school work and deal with racial alienation. Fellow Multicultural Leadership Councilmember Lanna Caruth (Special Events Co-Chair) spoke about what she termed, the epidemic of “disappearing black girls”—women who dropped out or took leaves of absence because their psychosocial and physical health needs were not being met.

Vanderbilt is a diverse school. That does not make it safe for women, enjoyable for Black and Indigenous students or welcoming for LGBTQIA+ students. Queer students still exist on the margins of social life: gay people still get called the f-slur on online platforms and transgender students still have their pronouns disrespected by their peers. Do not bring us here and expect us to change this institution for the better when you, as administrators and fellow students, refuse to hear our criticisms. Statistical shifts for brochure purposes should not be the goal of the university. The goal should be to implement suicide prevention measures tailored to the needs of students of color. The goal should be to recognize Black and Indigenous students’ concerns about at least the smallest of changes: like renaming buildings named after Confederate slave-owners or instituting a universal land acknowledgment. The goal should be that people can emerge from this institution more hopeful not less about the possibility of enacting change.