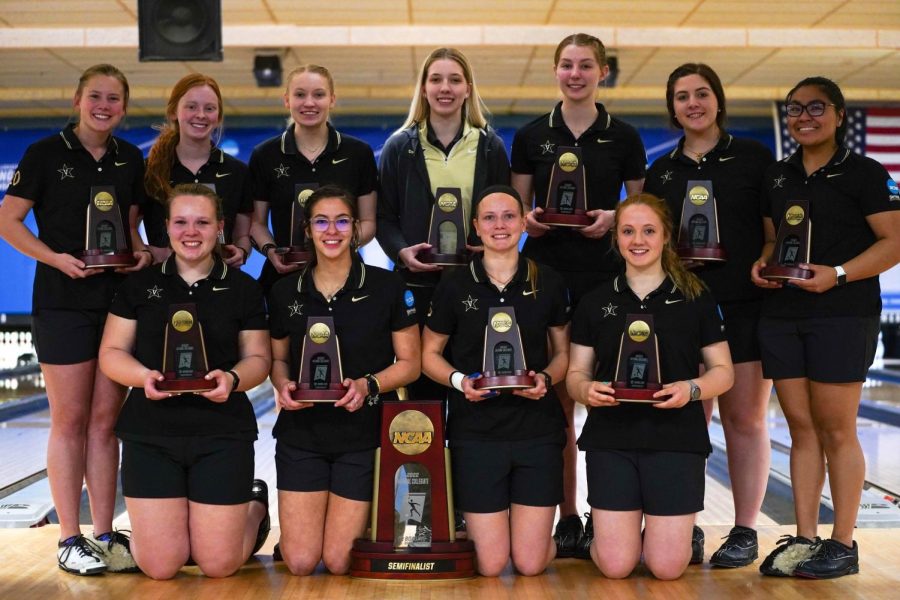 Nobody is harder on the Vanderbilt bowling team than the players themselves. For almost any program in the country a third-place finish would be a cause for weeks of celebration.

But when the team has won two of Vanderbilt’s five total NCAA titles, the expectations are unfathomably high. That pressure built to greater heights in the days preceding the NCAA Final Four from April 15-17 as the program racked up awards at the National Tenpin Coaches Association (NTCA) end-of-season ceremony.

Freshman Paige Peters took home the Division I Rookie of the Year award as well as First-Team All-Rookie and Third Team All-American honors. Additionally, junior Mabel Cummins won her second consecutive Second-Team All-American placement. Head coach John Williamson tied two other coaches to split the Division I Coach of the Year award. Always one to redirect the credit towards his players, Williamson stayed humble when asked about the accomplishment.

“I take it as the girls did something important for me to win that,” Williamson said. “I really didn’t do anything that important.”

Despite the accolades, the Commodores still had work to do at the Final Four in Columbus, Ohio. The tournament started on April 15 with an early-morning match against No. 12 Fairleigh Dickinson. In the opening traditional round of the mega-match format, the Commodores found themselves in a rare tie with the Knights. The teams moved to a five-frame tiebreaker in which Peters nailed a two-pin spare in the final frame to give Vanderbilt the victory.

The Commodores found themselves struggling uncharacteristically in the following five-game Baker set. Only connecting on two strikes the entire stretch, Vanderbilt never crossed the 200-point mark and found itself down the entirety of the match.

With the series tied 1-1 between the traditional and Baker matches, the two teams moved to a best-of-seven Baker series. The Commodores connected on four consecutive strikes down the stretch in Game 1, but it wasn’t enough to start the series with a win. Fairleigh Dickinson took Game 1 with an impressive 239-pin performance, and then took advantage of horrendous Vanderbilt shooting in Game 2 to secure a 2-0 advantage.

Six strikes in Game 3 allowed the Commodores to finally secure a victory in the match, but the positive momentum failed to carry over into Game 4. Fairleigh Dickinson finished the game with five consecutive strikes and took a 3-1 lead over Vanderbilt.

“There were some nerves,” senior Sam Gainor said of the rocky start. “Going in obviously we really wanted it, but our nerves kind of took over.”

An incredibly ugly performance by the Knights in Game 5 allowed the Commodores to get back in it with three closing strikes. In the following game, Vanderbilt found itself down with only the final shot of the 10th frame remaining. Peters, seemingly immune to the pressure of a season-defining moment, nailed the strike and caused the match to end in a tie.

At that point, it was destiny that the series go to yet another tiebreaker, and the Commodores clinched Game 7 to send both teams to a five-frame Baker set.

Never a team to get caught up in the lights or the moment, Vanderbilt notched five strikes in five frames to steamroll Fairleigh Dickinson in the tiebreaker of an exhausting series.

After a few hours of rest, the Commodores moved on to face No. 8 Stephen F. Austin State University with a spot in the championship match on the line. The teams were evenly matched 3-3 in the season series up to that point.

Vanderbilt found itself struggling with spare shooting in the opening traditional match and, accordingly, fell well below its typical scoring mark. The Ladyjacks would take the opener 912-897.

The first game of the Baker match went just as poorly for the Commodores as the previous hour had. White-hot shooting from Stephen F. Austin combined with an inability to connect on strikes led to an 83-pin deficit after Game 1. That negative momentum carried over into Game 2 as the Ladyjacks extended the lead, but Vanderbilt bounced back in Game 3 to trail by 81.

“There was never a time in any of the matches we played, unless we were mathematically out of it, that they felt out of it,” Williamson said as to what powered the Commodore comeback. “With that sort of mindset, you can achieve a lot.”

That mindset carried Vanderbilt on to another strong performance in Game 4 as the lead fell back down to 37 pins. Once Paige Peters finished Game 5 with a string of consecutive strikes, the Commodores had overcome their massive early-match deficit and forced the best-of-seven Baker series.

Then it all fell apart.

“I think it started with nerves, but we were never really able to get comfortable,” Gainor said. “We just weren’t ourselves.”

Games 1 and 2 of the series were nail biters in which missed spares cost the Commodores by a combined five pins. Stephen F. Austin stepped up in Game 3 and refused to make it close. Nailing strike after strike, the Ladyjacks dropped 269 points and sent Vanderbilt spiraling at 0-3.

After a season of resilience and immunity to pressure, the bright lights ultimately caught up with the Commodores as they dropped Game 4 due to untimely missed spares. Vanderbilt would drop the best-of-seven series without a single win and would move on to play McKendree on Saturday morning with their season on the line.

The night of rest proved a boon for the Commodores in the opening traditional match of the do-or-die series against the No. 1 Bearcats. Cummins and senior Angelica Anthony totaled above 200 pins a piece and led the team to a 983-932 victory.

The momentum kept up in Game 1 of the Baker match as Vanderbilt connected on eight strikes and took a solid 28-pin advantage. That lead would stay much the same through Games 2 and 3.

With a 15-pin advantage heading into the final two games, the Commodores just had to keep it together, not commit any major blunders, and walk on to a spot in the national championship game. Unfortunately, no part of bowling allows the team to play defense; so, no matter what the Commodores did in the following matches, it was not going to be enough.

McKendree, with its season on the line, promptly made a deal with the Egyptian moon deity Khonsu so as to never miss another spare. This allowed them to post back-to-back scores of 245 and 235 in the close-out games of the match and force the tiebreaker Baker series.

Five strikes in frames 4-8 allowed the Commodores to tie the Bearcats in Game 1 despite their newfound power. An inability to connect on a single-pin spare in Game 2 cost Vanderbilt as McKendree posted another ridiculous score of 238.

The story was effectively the same in Game 3 as McKendree put up another dumbfounding pin total and the Commodores failed to execute on spare shooting. Trailing 3.5-0.5, Vanderbilt would have to win each of the next three games and a tiebreaker to make the national championship.

The McKendree magic wore off in Game 4 and Vanderbilt managed five strikes to initiate the first part of the comeback 221-189. The Commodores followed that up with a magnificent nine-strike performance in Game 5 to bring the series to 3.5-2.5 with one game remaining.

After two games down in the dumps, McKendree reawakened in Game 7 and refused to surrender its series lead. The game started with eight consecutive strikes by the Bearcats, and there was simply nothing the Commodores could do. Just like that, after having won the traditional match and led the Baker set, Vanderbilt’s season was over.

“The little things are the things we work hard on and, if we don’t get them under control, they can really be amplified in the postseason,” Gainor said as to the reason for the loss. “It just came out in the postseason at the wrong time.”

However, it would be a massive disservice to the team to let this one moment define their season. This was the first team in Vanderbilt history to repeat as Southland League champions; they were also the first to advance to the NCAA Final Four under the new tournament format.

“I’ll remember them as a team that got better as the year went on,” Williamson said. “They were a legacy team to me in the sense that they have the level of grit that we don’t always have. It’s one we always aspire to.”

Gainor was also proud of how far the team came this year.

“Our season didn’t end how we wanted it to, and like I said we did not perform our best that first day, but we also didn’t give up,” the senior remarked. “This team has a lot of grit and perseverance, so that’s definitely how I’ll remember it.”

Undoubtedly, they’ll be back for more in the fall.