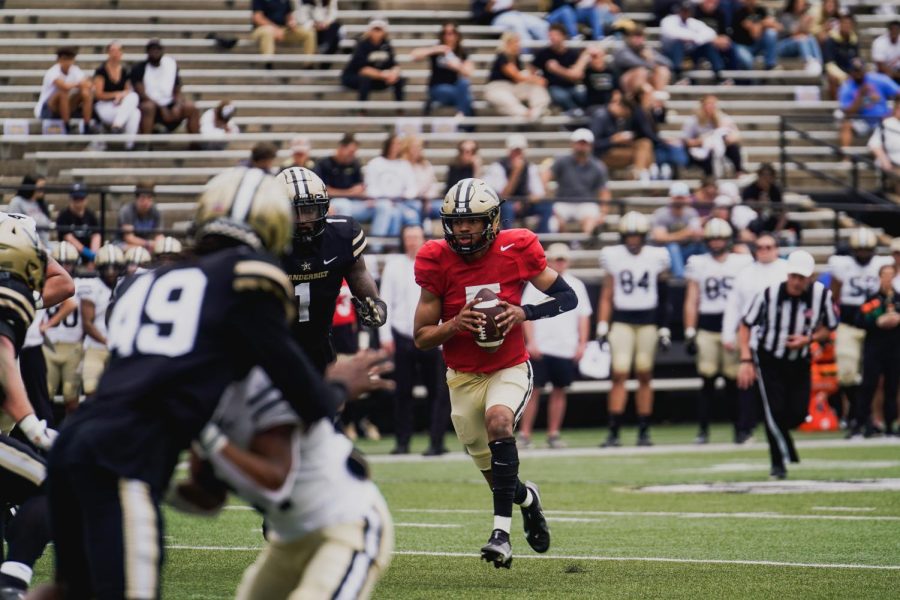 Mike Wright scrambles out of the pocket during Vanderbilt's spring game on April 16, 2022. (Hustler Multimedia/Arianna Santiago)

Coming off of a 2-10 season and their second consecutive winless campaign in the SEC, building has continued to be the theme of Lea’s tenure. But Saturday provided a glimpse into the future as seven early enrollees from a historic 2022 recruiting class took the field and a number of key returning upperclassmen led the charge on both sides of the ball.

“I feel really proud of them. I think it’s fun as a coach to watch self-discovery take place to watch confidence build,” head coach Clark Lea said, reflecting on the spring season. “I think these guys are standing taller, their jaws are set, their shoulders are square and I think they’re anchored in a belief right now of what we can accomplish.”

After rushing for over 350 yards last season, quarterback Mike Wright took the field on the offense’s first snaps and scampered for a 56-yard touchdown on the first drive to give the offense an early jolt. Wright’s usual balance of running and passing was on full display on Saturday.

Early enrollee and three-star recruit AJ Swann got the next crack under center and led seven drives on the day, including the eventual game-tying scoring drive. His day got off to a rough start however, as after completing his first three passes, he tried to force a ball to Devin Boddie Jr. on the right sideline and was intercepted by Justin Harris. He did, however, show off his impressive arm strength down the stretch of the game, completing a long pass to early enrollee Jayden McGowan, who made an impressive first impression.

“I thought he showed some athleticism in the back half of the scrimmage, evading rush and stepping up with the pocket,” Lea said of Swann. “He was able to find receivers down the field as a result. That’s always a good thing. So I think we’ve strengthened the play at that position in every facet.”

Ken Seals helped the offense round out its first half with a pair of touchdown drives to begin his day. Seals used his bread and butter, the mid-range passing game, to find tight end Ben Bresnahan and wide receiver Will Sheppard a number of times. Sophomore running back Patrick Smith and early enrollee running back Maurice Edwards finished off nice drives led by Seals with a pair of short rushing touchdowns.

“I was pleased with all three [quarterbacks] today. I think you know you saw aspects of each one of their games—they all three led scoring drives, they battled,” Lea said of his signal callers. “Mike in the first series, on third-and-10 takes the ball and tucks it and outruns everybody—we know he can do that. I thought Ken showed an ability to be efficient and to make throws. And then I thought AJ, honestly, he had the interception early but I liked that. Let’s take risks. Let’s bet on ourselves and take shots and learn from that.”

In addition to the Harris interception, senior Jaylen Mahoney forced a first-half fumble by knocking the ball loose from Rocko Griffin in the red zone to claim three points for the defense. Mahoney, who recorded the third-most tackles on the team last season with 52, made a number of physical plays to help the defense.

“He was all over the field,” Lea said. “You expect your top-end players to lead the charge and that’s what he did today. We talk about defense bouncing back and a defense counter punching—guys have to step up for that to happen and I thought today was his day to step up. He did a great job.”

The offense went into the locker room with a 24-22 advantage, but was held scoreless in the third quarter. New defensive coordinator Nick Howell’s group forced a Seals fumble and a couple punts to put themselves ahead 32-24 with just six minutes remaining before Swann led a game-tying touchdown drive.

With the spring season officially in the books, players will focus on finishing the spring semester strong in the classroom before a bit of time at home. But with the Commodores set to kick off their season in a week earlier this year, on August 27 against Hawai’i, summer preparation will be of the utmost importance.