Dr. Allen Sills discussed his role as NFL chief medical officer and progress being made to advance player health and safety. 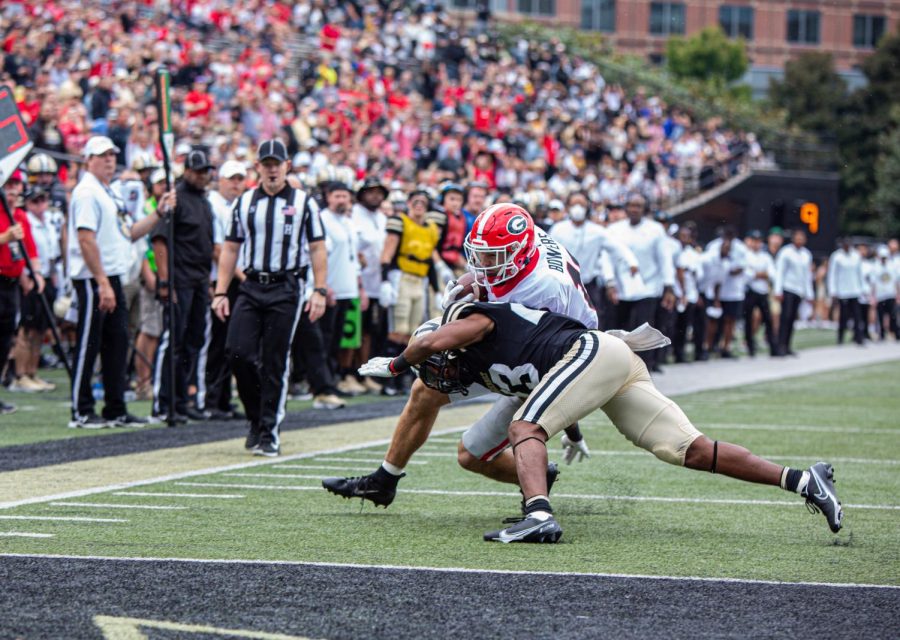 Vanderbilt and Georgia compete in a game on Sept. 25, 2021. (Hustler Multimedia/Mattigan Kelly)

On April 11, Dr. Allen Sills, professor of neurological surgery at Vanderbilt Medical Center (VUMC) and NFL chief medical officer (CMO), gave a guest presentation about sports medicine and concussions in the NFL to students in MHS 2140, a course about health care in the US. The discussion was facilitated by professor Gilbert Gonzales and was followed by a Q&A moderated by sophomore Basim Naim.

Sills joined the NFL as the league’s first CMO in 2017. His role is to strengthen and advance the safety and health of the sport by guiding research and developing data-driven injury reduction and preventative methods. In his discussion, he touched on the prevalence of concussions in the league, how the league handled COVID-19 and the future of medicine in the NFL.

Concussion rates are high for many sports, but football is at the top of the list. Sills explained that concussions are inevitable in football but that they can be reduced. He also addressed chronic traumatic encephalopathy (CTE), a progressive brain condition that arises from repeated episodes of concussions. Sills said CTE is a serious medical concern and not a hoax like some choose to believe, but he is hopeful that strategies can be developed to reduce and prevent it.

“CTE is a very real pathological entity, and we’ve got to learn more about it,” Sills said. “But doing good research takes time, and we are still confronted every day with athletes and parents who…[are] concerned about the long term issues.”

To develop strategies to prevent concussions, Sills said he and his team observe the circumstances in which players get concussions to develop prevention methods.

For example, to manage immediate player injuries, every NFL game has a 30-person sideline medical staff including athletic trainers, primary care physicians, dentists and unaffiliated neurotrauma consultants. Sills helped develop a concussion game day checklist that provides guidelines for how to evaluate players for a concussion. All players must be evaluated by the requirements to determine whether they can return to play after their injury. This checklist helps improve the ability to detect concussions in real time, and concussion evaluations can be requested by anyone on behalf of another player, including teammates, coaches, game officials, stadium ATC spotters or medical personnel.

Sills explained that players can also self-report concussions to receive evaluations and that self-reports have increased substantially since 2017, reflecting increased education and better understanding of the issue. The NFL’s concussion protocol requires players to be removed to a sideline medical tent or to the locker room to provide privacy and visual attention by blocking out distractions.

As education and awareness of concussions increases, Sills said players’ and teams’ cooperation shows their commitment to helping him and his colleagues make the sport safer. He elaborated that during the 2021 regular season, 1.3 concussion evaluations were conducted per game, and for every three to four players who are evaluated, one concussion is diagnosed.

“We want to have a very broad net,” Sills said. “We’re okay with accepting that a lot of [evaluations] will be negative, and our players are okay with that as well.”

When concussions occur, Sills said data is collected from a variety of sources to develop concussion risk-reduction strategies. He explained that every concussion report has an electronic record, and the NFL has an extensive electronic health database for every player. Sills said he and his team examine data from videos, ATC spotter reports, game statistics, player GPS tracking, player participation, stadium surface quality and other sources when concussions occur to determine various causes of concussions and develop strategies to reduce their occurrence.

“In 2017, [we asked] what could be done that would immediately reduce the number of concussions suffered by NFL players?” Sills said. “To address that, we have to understand what’s causing this and what kind of preventative steps we can take.”

The risk of concussions cannot be eliminated altogether, but by making changes to the game, Sills believes that the safety and health of players can be improved. Sills and his colleagues have established risk reduction strategies such as changes to equipment, style of play, training and supervision by mapping various aspects of gameplay.

Helmet improvement was a fundamental change pioneered by Sills and his team that helped reduce concussion occurrences. Data shows that the side of the helmet is the most common impact location that results in concussions. By developing a helmet-performance ranking methodology, Sills evaluated the safety of all NFL teams’ helmets.

In 2017, a little less than half of the helmets being used by NFL teams were classified as “not recommended” or “should be prohibited.” But since 2019, all NFL helmets have approved performance. Sills said the shift in helmets used by teams was not an easy change, but education and safety data helped persuade teams and players.

In addition to equipment improvements, Sills stated that changes in play technique and contact types can help reduce concussions. Sills explained that lowering one’s head to initiate and make contact against another player increases the chances of injury because of the head-spine-torso alignment. Based on Sills’s research, the NFL changed its rules to prohibit a player from lowering his head and initiating or making contact with his helmet. Violation of this rule can result in a foul or a game ejection. Although the change was controversial among fans, it was supported by the NFL Players Association.

Implementation of the new kickoff and blindside block rules also resulted in a 38% drop in concussions, per Sills. Sills said he encourages coaches to use the “hands first” approach for teaching blocking, which involves leading with the hands or shoulder instead of with helmets. Sills and his team found that this technique is four times less likely to cause injury.

Sills also noted other aspects of injury prevention that are currently developed. For example, the NFL is working with Amazon to develop digital copies of every player to be used as a modeling tool to predict the individual effects of various injuries, plays and techniques. Sills said he is also working on a turf innovation project by examining surfaces which are involved in lower-level extremity injuries. This endeavor also involves using athletes’ feedback to reduce injury without affecting performance.

The NFL and COVID-19

Sills and the NFL medical committees were highly involved in developing the NFL’s response to the COVID-19 pandemic, and he reflected on this experience in his discussion.

“In the pre-omicron era, we never saw any transmission across the line of scrimmage, from one team to another,” he said. “In 2020, when no one was vaccinated, a lot of our teams went to virtual meetings. When we did have team outbreaks, keeping them apart except for being outside on the practice field was really important in getting past that.”

The NFL strictly adhered to CDC protocols and conducted contact tracing to prevent outbreaks among teams and within the league. In 2021, more than 97% of players, coaches and associates became vaccinated and boosted. Throughout the pandemic, Sills and his colleagues collected detailed data regarding COVID-19 as well as its transmission and health impacts. The NFL published this research in collaboration with the CDC, and it was used by the CDC and the White House COVID-19 Task Force.

Sills likened the NFL’s response to the COVID-19 pandemic to the importance of teamwork and collaboration involved in football. He said the willingness of players, coaches, teams and NFL associates to adhere to protocols and mitigate the impacts of the virus is similar to the collaboration that the NFL exhibits regarding concussion and injury prevention.

Sills concluded his presentation by explaining his philosophy for advancing player health and safety.

“The best treatment is prevention,” he said.

He said he believes that football can still be exciting while being made safer.