The VandyBoys jumped back into the win column thanks to authoritative hitting. 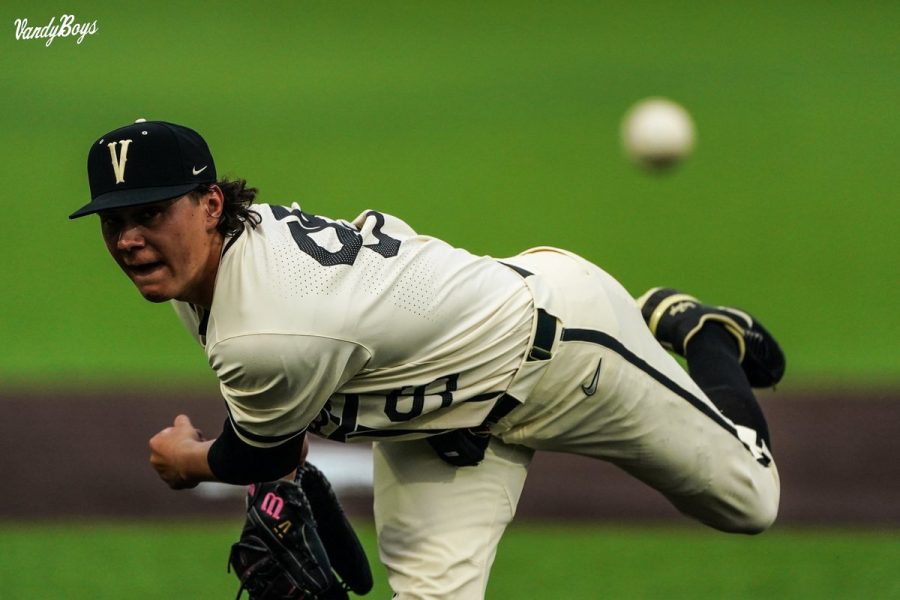 Following an 8-2 loss to No. 17 Auburn on Sunday, the Vanderbilt Commodores (23-9) defeated Western Kentucky (13-10) 7-4. The Commodores’ victory was driven by consistent base-hits each inning which translated to a high-scoring offensive showing over the course of the game. The Commodores had seven runs and nine hits in their 31 at-bats.

“I thought it was a good game,” senior catcher Dominic Keegan said. “I thought our offense did enough and had some timely hits.”

Devin Futrell got the nod for the VandyBoys and did not disappoint. Of the freshman’s five innings pitched, he notched 43 strikes, seven strikeouts and allowed only three hits. Unfortunately for Futrell, his day ended on a slightly sour note, as he allowed 2 runs in his final inning. Following Futrell’s solid showing, head coach Tim Corbin sent Nelson Berkwich to the mound. Berkwich, Grayson Moore, Brett Hansen, Thomas Schultz and Christian Little threw a combined 84 pitches, allowing six hits and two runs over the final four frames.

The Vanderbilt offense enforced their will right from the get-go, scoring three runs in the first inning. Spencer Jones gave the Commodores their first run of the day with an RBI double to bring Davis Diaz home from second base. Only a few moments later, Jack Bulger took the plate and knocked a two-run homer to left field. The Commodores would try to nurse their early three-run cushion the rest of the game, but Western Kentucky had other plans.

The ensuing inning would be much of the same for Corbin’s squad as Futrell needed only ten pitches to notch another 1-2-3 outing. On the offensive end, Carter Young struck a solo homer—his fifth of the year—to give the Commodores a 4-0 lead.

The next two innings would be reminiscent of the first and second inning for the Vanderbilt defense, as the Hilltoppers were unable to get any runners home. Through four innings pitched, Futrell allowed only one hit to the 13 batters he faced.

Futrell’s unblemished performance was threatened in the fifth inning. After allowing Justin Carlin to single, Jackson Gray hit a two-run homer to narrow the Western Kentucky deficit. Building off Gray’s homer, Western Kentucky’s Ty Crittenberger hit a deep shot to center field that looked to be a home run, but sophomore outfielder Enrique Bradfield Jr. made an acrobatic catch to salvage the inning for the Commodores.

“He [Futrell] just got tired,” Corbin said. “He’s still a young kid and you can’t forget that.”

T5: Futrell gives up a 2-run home run to end his shutout bid, but an acrobatic catch from Enrique Bradfield stops the bleeding there.

Vanderbilt’s two-score lead grew in the bottom of the fifth inning after Keegan brought home Jonathan Vastine from second base and advanced Bradfield Jr. from first base to third base. Jones then added to his RBI total by bringing Bradfield Jr. home via a fielder’s choice. The Commodores led the Hilltoppers 6-2 with four innings remaining.

Vanderbilt and Western Kentucky exchanged scoreless frames in the sixth inning, but the seventh inning saw runs from both teams. Western Kentucky quickly scored two runs off Vanderbilt’s Moore. After the sophomore allowed two hits and two runs on his four batters faced, Corbin decided to bring in the lefty Hansen to conclude the inning. After the seventh inning stretch, Keegan ripped a solo home run to center field, boosting Vanderbilt’s lead to 7-4.

The Commodores held onto that lead for the rest of the night thanks to Schultz converting a 1-2-3 showing in the eighth inning. Little concluded the night for the Commodores by throwing 15 strikes on 19 total pitches in the ninth inning.

“I think right now we just put anyone in that can get three outs,” Corbin said. “It was very good pitching at the end.”

The Commodores return to action on Friday, April 15, when they will host the No. 23 Florida Gators at 6 p.m. CDT. When the SEC rivals last faced off, the Commodores were defeated by the Gators 5-3.