Vanderbilt’s comeback over South Carolina was impressive, but a tough loss to Florida gave the Commodores a reality check. 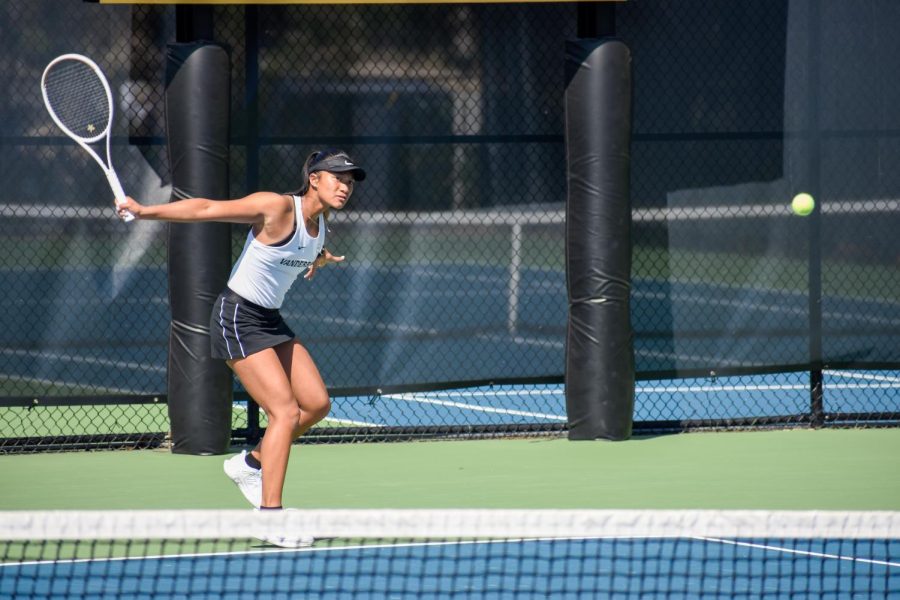 Vanderbilt women’s tennis hosted a trio of matches from April 1-3, which included clashes with South Carolina, Florida and Tennessee State. They edged the Gamecocks 4-3 on Friday but were silenced by the Gators 6-1 on Sunday before bouncing back a few hours later by sweeping Tennessee State 4-0.

The Commodores sprung into April lethargically, trailing 2-0 early in their Friday match. South Carolina took the doubles courts and the first singles point as Anessa Lee fell to No. 61 Ayana Aki on Court 2.

With an opportunity to clinch the match, No. 57 Anna Ross took South Carolina’s No. 2 Sarah Hammer to three sets but ultimately fell to Hammer 6-3 in the final set. With the match tied at three apiece, all attention turned to Holly Staff on Court 3. Staff delivered a Commodore victory after outlasting South Carolina’s Megan Davies in the third set, 6-4.

“Friday was an incredible college tennis match,” head coach Aleke Tsoubanos told The Hustler. “I thought we showed the most spirit, grit and fight that we have had all year. I’m always encouraged by that because I think that is what our team is capable of, and South Carolina is a great team.”

Two days after their thrilling 4-3 comeback over South Carolina, Vanderbilt was flattened by the No. 16 Florida Gators, 6-1. A Commodore upset seemed to be boiling after doubles partners MaryAnn Rompf and Dasha Kourkina took Court 3 decisively, 6-0. Although Rompf and Kourkina’s victory appeared to galvanize Vanderbilt, the team was unable to capture Court 1 and Court 2 and eventually lost the doubles point.

Moving to the singles courts, Vanderbilt was unable to change the narrative of the match as Stevens and Lee both fell to their Florida opponents. Florida’s Alicia Dudenay took command on Court 4, defeating Cruz (6-4, 6-1) and ended any hopes for the Commodores to fight back.

On Court 6, Kourkina also won her singles match, thanks to a dominant two-set performance against Florida’s Emma Shelton. Soon after, Vanderbilt’s Yufei Long lost Court 3, and Staff fell to No. 58 Marlee Zein in a three-set match.

“We didn’t quite bring the same level of intensity and competitiveness, I thought, on Sunday against Florida that we did on Friday with South Carolina,” Tsoubanos said. “A lot of what we’ll focus on is just trying to be more consistent in that way.”

After Vanderbilt was outlasted by the Gators, they ended Sunday on a high note, defeating Tennessee State 4-0 to move their spring nonconference record to 9-1.

The Commodores will look to get back into the win column on April 8 when they travel to Knoxville, Tennessee, to play the Volunteers at 11 a.m. CDT. Two days later, they will clash with the Georgia Bulldogs in Athens.

“A point of emphasis will be trying to get some of our younger players to really understand the Vanderbilt-Tennessee rivalry,” Tsoubanos said. “We will be trying to emphasize a commitment to intensity, spirit and competitiveness in the duel in all nine positions that are on the court.”