Swimming: Wrapping up the Commodores’ season

The Commodores competed hard this year, garnering success in dual meets and individual relays, but they’ll look to build on 2021-22 and rewrite the school record books next year. 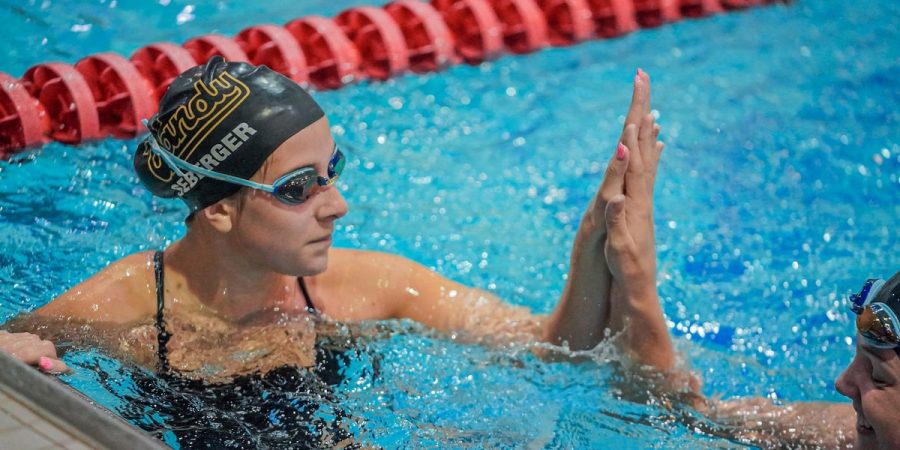 With the completion of the final tournament of the year, the Vanderbilt swim team’s 2021-22 campaign came to a close. They finished 5-2 in dual meets, and players competed in three tournaments over the course of the season: the Miami Invitational, the SEC Championships and CSCAA National Invitational.

The tournament closed out the fall season, giving the squad a mental reset and time to gear up for an important spring.

“We don’t get to take too much of a break over Christmas,” head coach Jeremy Organ said. “We went down to Florida to spend 10 days down there and train. It is kind of a nice refresher as we’re going through [the season]. It’s kind of the midpoint, so we can get ready for the last little push of the season.”

The Commodores returned in January for a difficult matchup with an impressive Tennessee team. They would, unfortunately, drop the meet but rebounded quickly with a win over Arkansas-Little Rock. This victory left the program with two weeks to prepare for the SEC Championships, held across the state in Knoxville, Tennessee.

At the tournament, Vanderbilt finished last out of 12 teams. However, the group set 10 season-highs in 10 different events in the five-day span. But, one result stands out above the rest, with freshman Kailia Utley breaking a school record in the 200 butterfly with a time of 1:58.53.

Utley was also the only member of the team chosen to compete in the CSCAA National Invitational. The major challenge of this final tournament was recovery, as the SEC Championships were just under three weeks before the big invitational.

“From that final meet, it’s hard to—in our swimming world, we call it—double taper. You have a big competition and then have to do another one two to three weeks later,” Organ said. “Just learning how to handle that and how hard it really is [is invaluable experience].”

Utley competed in the 50, 100 and 200 butterfly at the CSCAA National Invitational. She placed 56th in the 50, tied at 42nd in the 100 and earned 36th in the 200. This competition was a learning opportunity for the first-year swimmer who is part of a promising young core that looks to build on encouraging preliminary results.

“Nice to just see them come in and make an impact and really set a good foundation for them[selves] for the next couple years,” Organ said of his first-years.

Organ thought the year went well and sets up an important offseason for everyone.

“We’re really pleased with how our season went. We had some really great competitive dual meets during the year that we came out on top of, and I think that gave everybody a lot of confidence,” he said. “I think we ended really well. There’s a lot of things we’re hungry for next year, and it’s given everybody a lot of things to focus on and a lot of energy for over the summer. [We’re going] to come in next year ready to raise the bar one notch higher.”

Vanderbilt will be losing some key leaders in the senior class, who braved a difficult COVID-19 period and set the program up for future success. DeBeer, Neubauer and Abby Burke are just three of the talented eight seniors on the roster who may have swam their final race in the Black and Gold.

“I’m just so proud of that whole group,” Organ said. “The impact that they’ve had in the pool but also out of the pool—they’ve really helped our program continue to improve, and I think a mark of a good group is, ‘did you leave the program better than when you came in?’ I definitely think they can all say that.”

Looking at next season, Organ spoke about the youth of the group and the energy that it will bring to the entire squad.

“It’s going to be a really young group that’s going to have a lot of fire underneath them to compete,” Organ said. “It’s just going to raise the level of competition in the whole team.”

With such a youthful group, summer will be a crucial growth period for everyone. Organ touched on this potential and previewed the road ahead as the team moves into the offseason.

“Our goal for next year is to really rewrite the school record books,” Organ said. “I think we’ve got the pieces in place to make a real strong push at a lot of them.”

Vanderbilt swimming will return in August to build on the work that they put in this year, hoping to make a bigger splash on West End next fall.